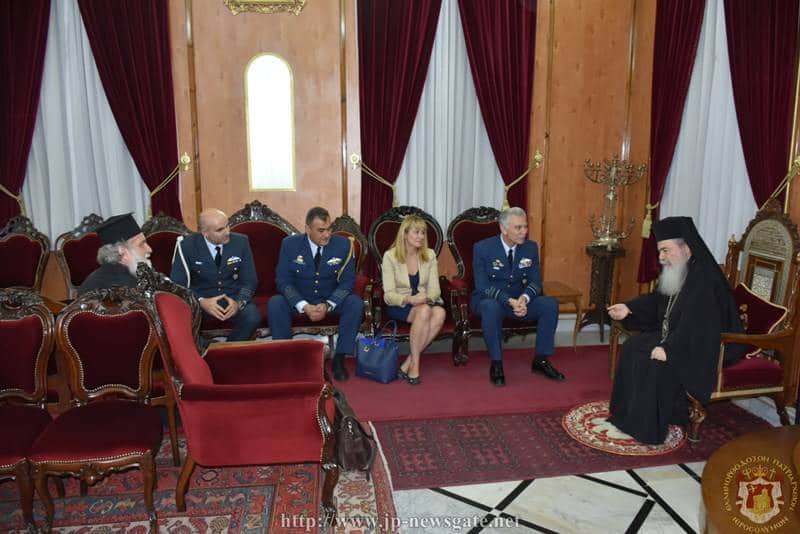 On Tuesday 8th/21st November 2017, there was the celebration of the Synaxis of the Archangels Michael and Gabriel. On this feast the Church commemorates the event that Lucifer and his angels when the latter ones opposed their Creator, Archangels Michael and Gabriel and their Angels fought against them and cried aloud “stand firm stand in fear!” worshiping and obeying God.

His Beatitude preached the divine word to this congregation as follows:

“Ye Chiefs of heavenly hosts and foremost leaders of the most high and awful thrones of divine glory, O great Michael and Gabriel, ye Chief Commanders, as ministers of the Master who ever pray with all of the incorporeal Hosts on high, warmly pleading for all the world, ask that He pardon our sins and grant His mercy and His grace unto us on the judgment day” the hymn writer proclaims.

“He, Who maketh his angels spirits, and his ministers a flame of fire” (Hebrews 1:7), our Lord God, has gathered us all in this Holy Church of the Bodiless Hosts, in order to celebrate their annual feast; the Synaxis of the Chief Commanders of the Angels, Michael and Gabriel.

The Bodiless Heavenly Hosts are ranked in nine orders, namely, Seraphim, Cherubim, Thrones, Dominions, Principalities, Authorities, Powers, Archangels and Angels. These Angelic Hosts were created by God from the non-being and before the visible world and man according to the witness of St. John Damascene: “He [God] is the creator and maker of the angels from non-being into being, having created them in their own bodiless form, which is spirit or immaterial fire, as Prophet David says: “who maketh his angels spirits and his ministers a flame of fire” (Psalm 104:4). And in more detail, He is the one who made the angels fast as the wind and his ministers energetic as the flame of fire.

The form and the state of these heavenly hosts is known to none but the Lord God, their creator. “Whether they are equal in essence to each other or different we don’t know. Only God their creator knows, who is the One who knows all things” St. John Damascene says.

The Angels and Archangels with their leaders and Chief Commanders Michael and Gabriel, are powerful and ready to fulfil the divine will and they are at once present anywhere the divine Spirit calls them with the speed of nature, safeguarding all places on earth. They supervise nations and countries as the Creator has appointed them, safekeeping and helping us in all things of our concern. However they have an advantage over the people regarding the divine will and order because they are constantly near God. They make haste to help and protect especially from the hatred and the fury of the devil all those who call upon them, as the hymn writer says; “Whenever thy grace casteth its shadow, O Archangel, thence is the power of the devil driven away, for fallen Lucifer cannot bear to stand before thy light.”

The Angels delegation in the ministry of the divine commandments and God’s unspoken will is obvious in the Sacred History of our salvation, namely in the Holy Bible, the Old and the New Testament.

The orders of the immaterial bodiless hosts along with all the saints of the Church are the chorea of the citizens in the heavenly Church as St. Paul says: “ But ye are come unto mount Sion, and unto the city of the living God, the heavenly Jerusalem, and to an innumerable company of angels, to the general assembly and church of the firstborn, which are written in heaven, and to God the Judge of all, and to the spirits of just men made perfect” (Hebrews 12:22-23).

In other words, the angels festively and unceasingly give glory to God, singing the hymn of victory: “Holy, Holy, Holy is the Lord Sabaoth; the heavens and earth are full of thy glory; Hossana in the Highest, blessed is He that cometh in the Name of the Lord; Hossana in the highest”.

For their boldness towards God, the Angels receive a special honour from the faithful members of the Church. Needless to say that a Guardian Angel accompanies us ever since the time of our spiritual rebirth, in our baptism in the font. They never leave us unless we drive them away with our non-Christian manner of living. The Angels participate in the joy in heaven on the genuine repentance of a sinner according to the word of our Lord Jesus Christ: “Likewise, I say unto you, there is joy in the presence of the angels of God over one sinner that repenteth” (Luke 15:10).

For all these, there is the well-known prayer among the many various prayers in our Church, in which we entreat the Lord saying: “Compass about with Thy holy Angels, that, guided and guarded by their array, we may attain to the unity of faith and the knowledge of Thine unapproachable glory”. And in the prayer to the “Guardian Angel of man’s life” we pray to the holy Angel to protect us from every work of the devil directed against us.

Angels were the ones who served Jesus after his victory over Satan in the desert, as Mark the Evangelist witnesses: “And he was there in the wilderness forty days, tempted of Satan; and was with the wild beasts; and the angels ministered unto him” (Mark 1:13).

Today’s honoured Chief Commanders and Archangels Michael and Gabriel along with the rest of the holy bodiless heavenly hosts, my dear brothers, urge us to the recovery of our souls, namely to repentance, especially as we find ourselves before the preparation for the great Feast of Christmas.

Let us pray by the intersessions of the Angels and together with the hymn writer say: “Whenever thy grace casteth its shadow, O Archangel, thence is the power of the devil driven away, for fallen Lucifer cannot bear to stand before thy light. Wherefore, we implore thee to extinguish his fiery darts that are cast against us, ad by thy mediation deliver us from his stumbling-blocks, O praiseworthy Archangel Michael”. Many happy and peaceful returns. Amen.”

After His Beatitude’s address, the students of the Patriarchate’s School in Joppa thanked Him for His support to the School through the following address in Arabic and offered them a bouquet of flowers;

The Divine Liturgy was followed by a Doxology and then a meal reception at the Hegoumeneion, hosted by the Hegoumen Most Reverend Archbishop Damascene of Joppa.