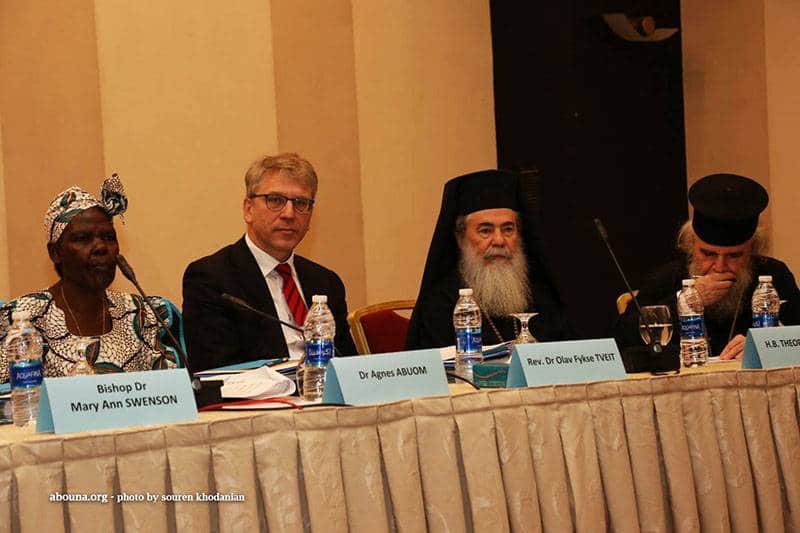 THE FEAST OF THE DEPOSITION OF THE BODY OF ST. GEORGE THE GREAT MARTYR

On Thursday 3rd/16th November 2017, the Patriarchate celebrated the commemoration of the deposition of the body of the Holy Great and Glorious Martyr George the Trophy bearer.

On this day the Church does not celebrate the martyrdom of the Saint but the deposition of his sacred relics in Lydda, which was brought from Rome where the Saint suffered a martyr’s death during Diocletian’s reign, around 305 A.D. The Saint’s relic was transferred and deposited in Lydda because it is his hometown on his mother’s side. When St. Helen came in the Holy Land between the years 326-336 A.D., she built a magnificent Church above his tomb in his honour, which is preserved to this day and belongs to the All-holy Shrines of the Jerusalem Patriarchate.

Therefore, on 3rd November each year, there is the commemoration of the deposition of the Saint’s body and the consecration of the Church bearing his name in Lydda.

In the morning of the Feast, the Divine Liturgy was led by H.H.B. our Father and Patriarch of Jerusalem Theophilos, with co-celebrants the Most Reverend Metropolitan Isychios of Kapitolias, the Most Reverend Archbishops Damascene of Joppa, Aristarchos of Constantina, Methodios of Tabor, the Hieromonks Archimandrites Stephen, Niphon, and Dragouman Archimandrite Mattheos. The Choir Leader of the All-holy Church of the Resurrection Archimandrite Aristovoulos and Archimandrite Leontios sang in Greek, Russian and Romanian and the choir of this Parish sand in Arabic, in the attendance of a noble congregation of the Orthodox faithful of Lydda and other towns of Israel and Palestine and pilgrims from Greece, Russia, Romania, Ukraine and Cyprus.

His Beatitude preached the Divine Word to this Congregation as follows:
“Blessed Trophy-bearer George, with the streams of thine own blood thou mightily didst quench the flame of delusion and error, destroying all the tyrants’ pride, hereby glorifying Christ. From the right hand of the Most High hast thou therefore been given crowns of life ever-lasting and of divine incorruption” the hymn writer of the Church exclaims.

The sacred memory of the deposition of the Great Martyr George’s holy relics in his Church in the historic town of Lydda, along with the memory of the consecration of this magnificent Church, has gathered us all herein. And this is for us to honour in thanksgiving “the husbandry tilled by Christ, as one valiant in martyrdom, let us sing praises of wise and noble George”

Indeed George was established a Great martyr among those who martyred for the love of Christ. This is a consequence of his martyrdom which referred to the preaching of the truth of Christ. All these happened during the reign of the Roman Emperor Diocletian, the cruel persecutor of Christians who supported the worship of idols and many false gods. “Having gloriously preached Christ to be both God and the Son of God, he boldly proclaims reverence, namely the truth of the Gospel. For this reason he was imprisoned and suffered countless sufferings of all kinds” his Synaxarist says.

The wise George preached the Word of God Who was made manifest in the flesh, as St. Paul preaches by saying: “And without controversy great is the mystery of godliness: God was manifest in the flesh, justified in the Spirit, seen of angels, preached unto the Gentiles, believed on in the world, received up into glory” (1 Tim.3:16). And the people believed in Christ because He was most fairly proven to be the self-truth and the light of the world. “I am the way, the truth, and the life” (John 14:6); “I am the light of the world: he that followeth me shall not walk in darkness, but shall have the light of life” (John 8:12).

The steadfast faith of St. George on the light of truth and of life, namely of our Lord Jesus Christ, contributed greatly in abolishing the falsehood of idolatry and the worship of demons, whose followers believed that by killing those who believed in the truth and light of Christ, would offer praise to God, according to the prophetic word of Jesus who said “the time cometh, that whosoever killeth you will think that he doeth God service” (John 16:2).

The universally honoured memory of St. George is an irrefutable witness that “blessed are they which are persecuted for righteousness’ sake: for theirs is the kingdom of heaven” (Mat. 5:10). The true Christian, my dear brothers, is certain to face persecutions, condemn and scorning, if not corporal mistreatment altogether. And this is so because “righteousness in Christ means all kinds of virtue” according to Zigavinos. A living example of this righteousness is St. George the Great Martyr, whose “soul thirsteth for God, for the living God” (Psalm 42:2).

Moreover, the hymn writer is more precise on the same idea when he says: “With the streams of thine own blood thou mightily didst quench the flame of delusion and error, destroying all the tyrants’ pride, hereby glorifying Christ. From the right hand of the Most High hast thou therefore been given crowns of life ever-lasting and of divine incorruption”

St. George’s example teaches us that the prime care of the Christian should be the freedom from the corruption of sin, namely the freedom in Christ. However, the true freedom is accomplished when man, and especially the man of the Church acquires the mind of Christ; namely, when man is reborn spiritually and receives the enlightenment of the Holy Spirit. “But we have the mind of Christ” the wise St. Paul says.

And elsewhere, St. Paul warns us “And be not conformed to this world: but be ye transformed by the renewing of your mind, that ye may prove what is that good, and acceptable, and perfect, will of God” (Romans 12:2). In other words, brethren I beseech you, do not conform to the manner of living of the material people who are attached to the vain thoughts and cares of this temporary life, but be transformed through the gaining of Christian thinking so that you can distinguish the will of God, which is noble and pleasing to Him as well as perfect at the same time.

Our holy Church my dear brothers is the Church of those who live with Christ in heaven. Christ’s co-citizens and friends are the saints and the multitude of the martyrs who adorn the earthly and heavenly foundation of the Church.

Today’s honoured St. George the Great Martyr, “manifested as a living sun” through his holy relics, never ceased to intercede for all who ask his help. Therefore, along with the hymn writer, let us who honour his memory say: “As I voyage upon the sea, as I journey o’er hill and plain, as I sleep throughout the night, do thou keep me safe! And as I wake do thou rescue me all-blessed Great Martyr George; deem me worthy to perform every day the Lord’s holy will, so that I may find in the day of dread judgment the remission of all sins that in my lifetime I have wrought, who now flee unto thee”. Amen”

Afterward, the Hegoumen of the Monastery Archimandrite Nicodemus offered a reception to the Patriarchal entourage and many of the pilgrims at the Hegoumeneion. Therein His Beatitude greeted the guests as follows:

“Dear Mr. President of the Community

Respected Members of the Community of Lydda.

Today’s feast of the commemoration of the consecration of St. George’s Church, as well as the deposition of his holy relics in the tomb here is of great significance. And this is so because St. George is an example in our contemporary multi-cultural and multi-religious and multinational composition of society in the Middle East as a whole, and especially in the Holy Land.

St. George was inspired by the Gospel of love and the righteousness of Christ, he denied the Roman military armor and was clad in the spiritual armor instead, according to St. Paul’s command: “Put on the whole armor of God, that ye may be able to stand against the wiles of the devil. For we wrestle not against flesh and blood, but against principalities, against powers, against the rulers of the darkness of this world, against spiritual wickedness in high places” (Eph. 6:11-12). And the wise Paul adds: “Stand therefore, having your loins girt about with truth, and having on the breastplate of righteousness” (Eph. 6:14).

It is precisely this breastplate of righteousness that the Great Martyr of the love of Christ George put on, who is honoured not only locally but universally.

In other words, the Great Martyr George incarnates the genuine preaching of Christ’s Gospel as well as the authentic mission of the Christian Church in the world. And the mission of the Church in the world is nothing else but the salvation of man, namely his cure from the traumatic state of sin and the corruption of death. “But go ye” our Lord Jesus Christ asks His disciples “and learn what that meaneth, I will have mercy, and not sacrifice: for I am not come to call the righteous, but sinners to repentance” (Mat. 9:13).

The Church of Jerusalem, known as the Greek Orthodox Patriarchate of Jerusalem, has been a bearer and apostle of this preaching of the Gospel, through its unceasing presence and ministry in the Holy Land for two thousand years.

The Church of Jerusalem boasts for its saints and especially for those who became co-martyrs to the blood of the Righteous One, namely Christ. Distinguished among them is the Holy Hieromartyr and Apostle, James the Brother of God, and the first martyr Deacon Stephen, who during his stoning was calling upon the Lord saying: “Lord Jesus, receive my spirit. And he kneeled down, and cried with a loud voice, Lord, lay not this sin to their charge” (Acts 7:59-60).

Today’s honoured St. George in his hometown Lydda, walked on the footprints of the first martyr Stephen, and he represents the symbol of the harmonious co-existence and mutual respect among the religious communities living here, the Jewish,  the Christians and the Muslims.

May our holy town, once known as Georgetown, be a beacon of co-existence, tolerance, as well as forgiveness among religions and their Communities. Many happy returns.”

At noon, the Hegoumen and the Parish Council offered a meal to His Beatitude and entourage.

In this Monastery which is located near the Patriarchate and is adjacent to the Monastery of the Archangels, Vespers in the evening and the Divine Liturgy on the day of the feast were led by the Most Reverend Archbishop Demetrios of Lydda, with co-celebrants Hagiotaphite Fathers, at the singing of Archimandrite Eusevios, Archimandrite Demetrios and nuns of the Patriarchate. Present was a congregation of monks, nuns and laity members of the Greek Community.

The good keeper of the Holy Monastery Abbess Pansemni offered a reception for the Episcopal Entourage and the Congregation at the Hegoumeneion.

In this Monastery, Vespers was held by Archimandrite Agathaggelos of the Holy Metropolis of Goumenissa, while the Divine Liturgy in the morning was led by the Most Reverend Metropolitan Joachim of Helenoupolis, in the attendance of a noble congregation of nuns, members of the Greek Community and pilgrims.

After the Divine Liturgy, the renovator of the Holy Monastery Reverend Abbess Anna offered a reception for all present at the hegoumeneion.