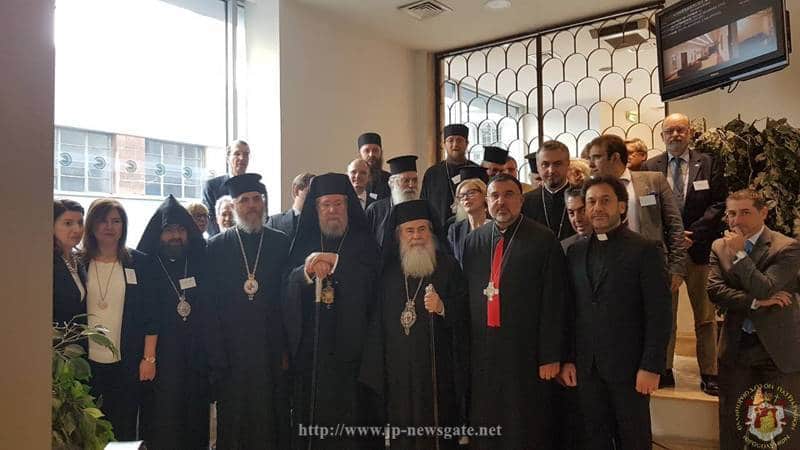 HIS BEATITUDE THE PATRIARCH OF JERUSALEM PARTICIPATES IN THE CONFERENCE “PLACES OF WORSHIP AND HOLY SITES IN EUROPE AND THE MIDDLE EAST” IN CYPRUS.

The Conference on “Places of worship and Holy Sites in Europe and the Middle East: Status and Protection under National and International Law” was held in Nicosia of Cyprus from Wednesday 26th October/8th November to Friday 28th October/10th November. The Conference was organized by the Conference of European Churches in partnership with the Presentation Office of the Church of Cyprus and the European Institutes.

Upon His arrival at the place of His stay, the newly founded Exarchy of the Holy Sepulchre in Nicosia, He was welcomed by the Most Reverend Exarch and Metropolitan Timotheos of Bostra, who has been the major contributor in the reorganization of the Exarchy, and the Acre choir under the Patriarchal Commissioner in Acre, Archimandrite Philotheos, sang at the special Service in the Church.

The opening of the Conference was on Thursday morning, 9th November 2017. In the first session addresses were greeted by the following; His Beatitude Archbishop Chrysostom of Cyprus, underlining the importance of the cooperation between the political and religious parties for the protection of the religious shrines in the Middle East in general and in Cyprus in particular which is the cradle of World Culture; the Minister of Foreign affairs of Cyprus Mr. Kasoulides, underlining the importance of the places of worship of the religious Communities for the preservation of their identity and the potential damage and loss of the identity of the religious Communities should they be forced to abandon their ancestral homes, as was the case with Iraq, Cyprus and other countries. Mr Kasoulides also referred to the importance of the restoration of the shrines and the return of the merchandised stolen artifacts of worship, as they are monuments and treasures of the universal cultural heritage. The Conference was also greeted by the co-organizer of the Conference, Mrs. Elizabeta Kitanovic, Executive Secretary of Human Rights of C.E.C. (Conference of European Churches).

His Beatitude our Father and Patriarch of Jerusalem Theophilos addressed the Conference with the statement in the following link:

During His stay in Cyprus for the demands of this Conference, His Beatitude was hosted for a meal at the Archdiocese of Cyprus by His Beatitude Archbishop Chrysostom of Cyprus.

In this meal His Beatitude the Patriarch of Jerusalem discussed with His Beatitude the Archbishop of Cyprus the recent disturbing issue for the Jerusalem Patriarchate and all the Christian Churches of the Holy Land with the proposed bill by the 40 members of the Knesset, which if passed into law, will deny the right of the Churches to freely deal with their land properties, as well as the recent decision of the District Israeli Court, which gives effect to the illegal contracts of the Jaffa Gate hotels that belong to the Patriarchate to the Settlor group “Ateret Kohanim”.