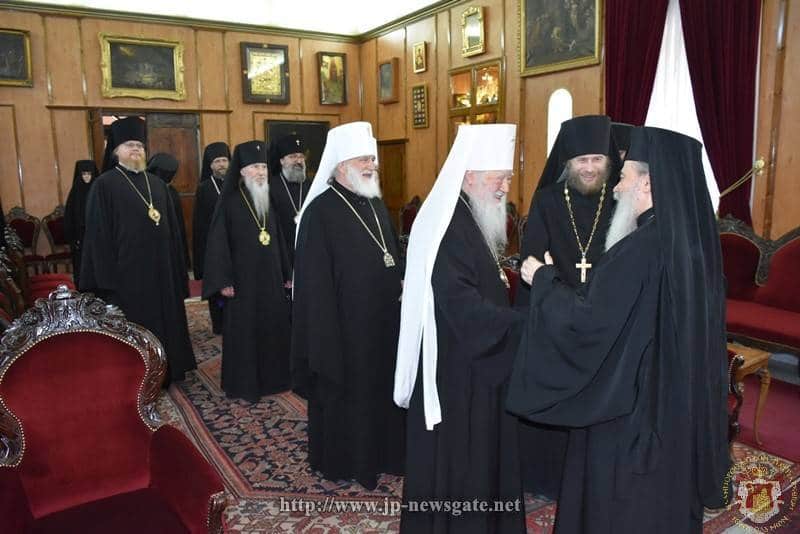 On Friday 7th /20th October 2017, His Beatitude our Father and Patriarch of Jerusalem Theophilos received the Delegation of the Moscow Patriarchate, consisting of Metropolitans, Hieromonks, monks and laity, on the occasion of the 170th foundation anniversary of the Russian Ecclesiastical Mission (MISSIA) in Jerusalem. The Holy Nunneries of Oreini, Mount of Olives, Gethsemane, Hebron, Tavitha and others, belong to this Spiritual Mission.

This Mission was warmly received by His Beatitude, who referred to the brotherly relations between the Moscow and Jerusalem Patriarchates, recalling the days when He was a deacon to the memorable Patriarch of Jerusalem Benedict and He also served the memorable Patriarch of Moscow Poimena, as a guest in His Patriarchal residence in the Mount of Olives. Congratulating them on the celebration of this event, His Beatitude said that this is important for the Church of Russia and Missia, but also for the Christian Community in Jerusalem and the Holy Land, which over the centuries has been pastored by the Jerusalem Patriarchate, which represents all Orthodox Churches and all Orthodox Christians.

The Jerusalem Patriarchate is a member of the mystical body of Christ, the Church, whose member is the Russian Church too, which has received the wound of schism in its bosom, for which we pray continuously and ardently.

We are glad on your arrival, because we share a common witness of the Orthodox Church in the Holy Land. We do not have claims over this land, but we have claims over its holiness and spirituality.

We are going to demonstrate this on our co-celebration of the Divine Liturgy at the Holy Sepulchre tonight, and at the Church of the Holy Trinity of MISSIA on Sunday.

Consequently, His Beatitude wished the Russian Mission every success on the purpose of its visit, with the hope of the Resurrection of Christ, by which the Church has been living all along as the ark of salvation, safeguarding our spiritual, national, linguistic and theological identity.

We are especially rejoicing on the presence of the exquisite Hierarchs of the Russian Church, with whom we once cooperated during their ministry in MISSIA.
From Secretariat-General