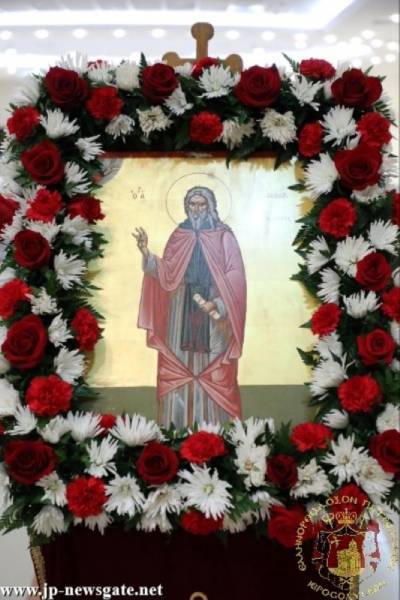 THE FEAST OF ST. ISAAC THE SYRIAN AND ORDINATION OF A PRIEST IN DOHA

The feast of the Holy Cathedral in Doha was celebrated with special ecclesiastical brilliance, with the participation of Jerusalem Patriarchate clergy, who came to honour the feast and co-celebrate the Divine Liturgy and the ordination of Deacon Demetrios as Priest. For pastoral reasons the feast was transferred on Friday.

On Thursday 12th October 2017, Great Vespers was officiated by the Most Reverend Metropolitan Benedict of Philadelphia with the blessing of bread. The hymns were sung by the Choir Leader of the All-holy Church of the Resurrection Archimandrite Aristovoulos in Greek and Russian and the choir of the Holy Church sang in Arabic. After Vespers there was a pre-festal meal for the clergy and the parish members.

On Friday 13th October 2017, Matins and the Divine Liturgy were celebrated, with the ordination of Deacon Demetrios as Priest, officiated by the Most Reverend Metropolitan Benedict of Philadelphia with co-celebrants the Most Reverend Archbishop Makarios of Qatar, Archimandrite Aristovoulos, Archimandrite Stephen, Archimandrite Leontios and Deacon Demetrios, with the participation of a crowd of faithful. The feast was honoured by the presence of the Ambassadors of Greece Mr. Constantinos Orphanides, of the Democracy of Cyprus Mr. Mihail Zacharioglou, the Consul of Greece Mr. John Zelomosides and the Defense Attache, Colonel Mr. Panagiotis Krikis. After the Divine Liturgy there was the litany of the Holy Icon of St. Isaac the Syrian, followed by a reception at the reception hall of the Archdiocese.