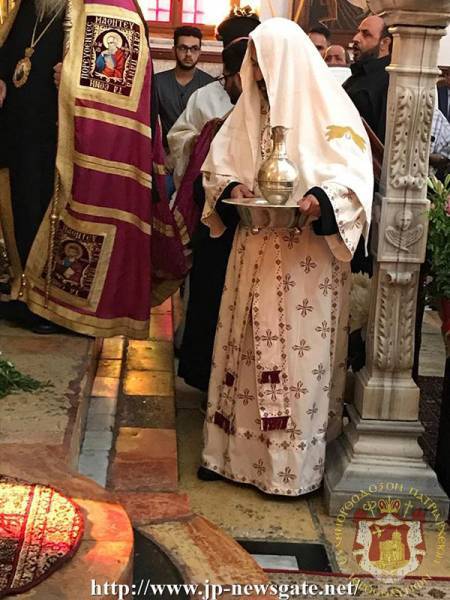 On Wednesday, 14th/27th September 2017, the Feast of the universal Exaltation of the Sacred Cross was celebrated by the Patriarchate at the All-holy Church of the Resurrection.

This event was celebrated beginning with the 9th Hour at the Monastic Church of Saints Constantine and Helen followed by Vespers at the Catholicon of the Church of the Resurrection, officiated by H.H.B. our Father and Patriarch of Jerusalem Theophilos, with co-celebrants the Archbishops at the Holy Altar and Hagiotaphite Priests, first of whom was Elder Kamarasis Archimandrite Nectarios and Priests from other Orthodox Churches, Archdeacon Mark and Deacon Anastasios, with the Choir Leader of the All-Holy Church of the Resurrection Archimandrite Aristovoulos and the Left Choir singer Mr. George Alvanos, with the participation of a congregation of many pilgrims from Greece, Cyprus, Russia, Romania, Ukraine and local Greek-Orthodox and Arab-Orthodox and monks and nuns.

On Wednesday 14th/27th September  2017, the Divine Liturgy was celebrated at the Catholicon of the All-holy Church of the Resurrection, led by H.H.B. our Father and Patriarch of Jerusalem Theophilos, with co-celebrants the Most Reverend Metropolitan Isychios of Kapitolias, the visiting Most Reverend Metropolitans Pitirim of Siberia of the Moscow Patriarchate, Gabriel of New Ionia and Philadelphia of the Church of Greece, and the Most Reverend Bishop Nikolaos of Amathounda of the Church of Cyprus, the Most Reverend Archbishops Theophanes of Gerassa, Aristarchos of Constantina, Methodios of Tabor, Theodosios of Sebastia, Demetrios of Lydda, and the Most Reverend Metropolitan Joachim of Helenoupolis, Hagiotaphite Hieromonks, first of whom was Elder Kamarasis Archimandrite Nectarios, and visiting Hieromonks from other Orthodox Churches, with the Choir Leader of the All-Holy Church of the Resurrection Archimandrite Aristovoulos and the Left Choir singer Mr. George Alvanos, at the presence of the Consul General of Greece in Jerusalem Mr. Christos Sophianopoulos and the participation of a vast crowd of pilgrims similar to that of the Easter period.

The Procession went past Deposition, Adam’s chapel, the Crown of Thorns, and down the chapel of the finding of the Sacred Cross. There the Patriarch performed the exaltation of the Sacred Cross at the four parts of the horizon, despite the unfortunate event of the Armenians trying to hinder the Litany of the Orthodox faithful.

On the way up, the procession went past the chapels of the Seven Pillars and round the Holy Sepulchre three times, then through the chapel of the Holy Deposition went up to Horrendous Golgotha.

Therein, the Patriarch exalted the Cross at the four parts of the horizon according to the Status Quo of worship and having placed the Sacred Cross on the Holy Altar of Golgotha, the people venerated the place of the actual Sacred Cross on which our Lord Jesus Christ was nailed for our salvation.

Having venerated the Sacred Cross and received the blessed basil leaves, the procession went down to the Holy Altar of the Catholicon where the congregation was dismissed for its ascend to the Patriarchate.

At the Patriarchate, His Beatitude gave the following address:

““But God forbid that I should glory, save in the cross of our Lord Jesus Christ, by whom the world is crucified unto me, and I unto the world” (Gal. 6:14) St. Paul preaches.

The power of the sacred and life-giving Cross has gathered us all in this sacred place of the passion on the Cross and the same place where the Cross was found, so that we can festively celebrate its universal exaltation.

“Being lifted upon the Cross, Thou didst raise Adam with Thyself and, with him, our whole fallen nature, O our Lord. Wherefore, exalting Thy spotless Cross, we ask Thee, O Friend of man, for Thy power from above, as we cry out: o Thou Most High, save them that revere the divine, bright and hallowed Exaltation of Thy Cross with fitting honour, since Thou art God and All-merciful” the hymn writer says.

That is why St. Paul boasts and the whole Church of Christ together with him. Indeed, the whole fallen nature of the humankind was co- exalted in the Cross of Christ the new Adam, and was liberated from the offense of the disobedience through the blotting out of the handwriting of ordinances that was against us (Col. 2:14).

In other words, the former Angel of light of God’s glory, having been obsessed with the cursed disease of conceit, was transformed into an angel of darkness and a malicious snake, the devil of disobedience. On the contrary, the Son of God, our Lord Jesus Christ “humbled himself, and became obedient unto death, even the death of the cross. Wherefore God also hath highly exalted him, and given him a name which is above every name: That at the name of Jesus every knee should bow, of things in heaven, and things in earth, and things under the earth” (Philipians 2:8-10). And the Cross of Christ has become the wood of blessed obedience and ultimate humility, the divine trophy and weapon against the devil and the visible and invisible enemies. Behold why the Sacred Cross is the beauty of the Church and the guardian of the whole world. Moreover, according to St. Gregory Palamas, the Sacred Cross glorifies and exalts our Saviour Christ, manifesting His victory to the world.

Therefore, together with St. Paul and the hymn writer of the Church let us say: “God forbid that I should glory, save in the cross of our Lord Jesus Christ, by whom having suffered, He mortified the passions. This very Cross of the Lord all of you and I hold as our boast; for it is our salvation this wood, the weapon of peace, the undefeated trophy.” Amen. Many happy returns.”