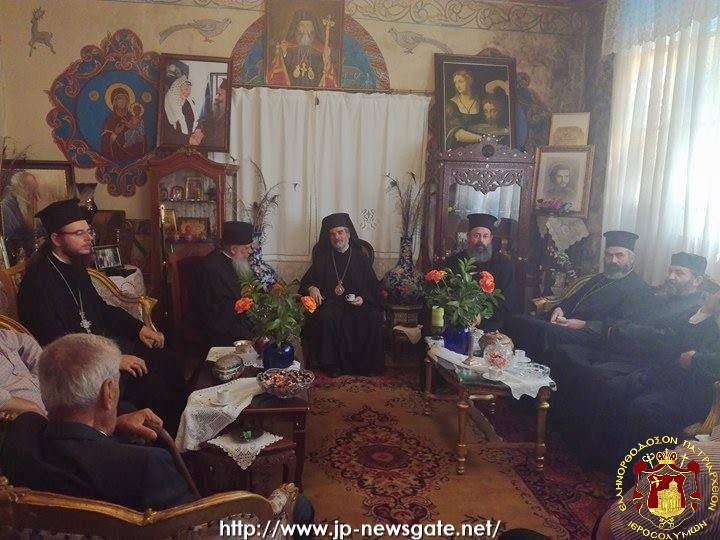 On Wednesday 17th/30th August 2017, a Divine Liturgy was celebrated at the Church of Jacob’s Well in the City of Nablus. The Liturgy was led by the Most Reverend Archbishop Theophanes of Gerassa, with co-celebrants Hagiotaphite Hieromonks, along with two Priests from local Churches of Nablus and Zababdeh, and Archimandrite Ioustinos the Hegoumen of Jacob’s Well Monastery.

A number of local Christians attended the Liturgy, as well as a group of Greek tourists who had originally come to visit this holy place and drink from the water the well still provides and they had the opportunity to receive the Holy Communion on this special day which marks the 9th anniversary since the foundation of Jacob’s Well Church. A great role of responsibility and devotion has been shown by Archimandrite Ioustinos who has invested time, money and effort to bring the Church and the Monastery to its current state.

This shrine has witnessed the conversation between our Lord Jesus Christ and the Samaritan woman (named Photini) after the Lord asked her to give Him some water to drink while He was sitting down by Jacob’s well to rest, during His journey from Judea to Galilee. There, Jesus told the woman “Everyone who drinks this water will be thirsty again, but whoever drinks the water I give them will never thirst. Indeed, the water I give them will become in them a spring of water welling up to eternal life.” (John 4:13-14)

After the Liturgy, the Bishop and the Priests were invited by Father Ioustinos along with the congregation to the Monastery hall to exchange greetings, and later a fish meal was served.