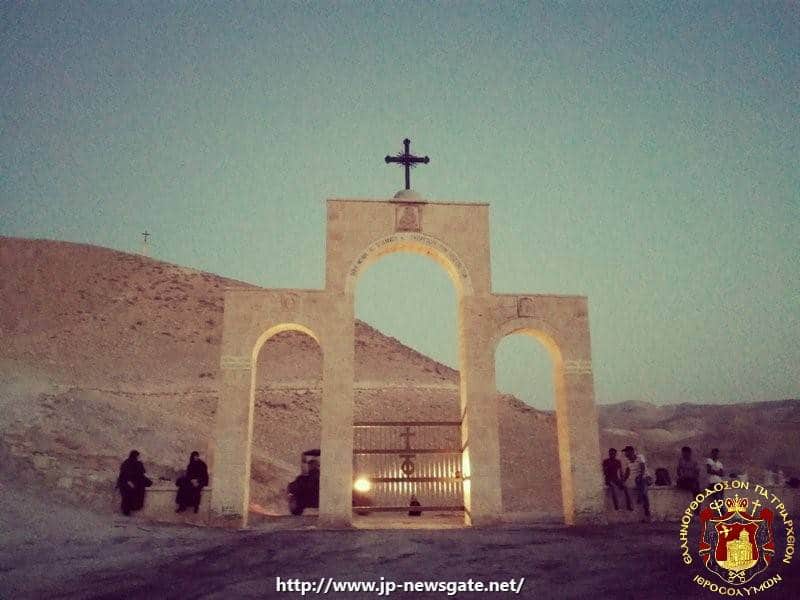 ST.GEORGE’S MONASTERY IN THE WILDERNESS OF JUDEA

The extra ordinary Monastery of St George, which can be seen hanging on a cliff and tightly embraced within the ancient rocks of the deep valley of “Wadi Qelt” [Wadi: Arabic for valley] in the Judean desert, happens to be not only one of the world’s oldest Monasteries, but also one of the most inspiring Churches in the Holy Land. And if you are seeking solitude, calm, and true peace, then look no more because you are at the right place. This Monastery which is among only five Monasteries still manned in the Judean desert, lies on the main route from Jerusalem to Jericho. This well-traveled road is often referred to as “Ma’ale Adummim” or the “Ascent of Adummim”, and the traveler is guided there by following the brown signs for Wadi Qelt. After going through the entrance gate, visitors will still have to walk for around 15 minutes down a winding path, which may not be so easy for seniors or people with disabilities, but there are usually plenty of locals hiring their donkeys for the ride.

The route itself “Ascent of Adummim” is mentioned a few times in the Holy Bible. It is believed that some biblical events have occurred there, including: David’s flight from Absalom (2 Sam 15-16), Zedekiah’s flight from the Babylonians (2 Kings 25:4), the story of the Good Samaritan (Luke 10:25-37), and Jesus’ travel from Jericho to Jerusalem (Luke 19:28).

But what is the “Ascent of Adummim”?

It is mainly the road up to Jerusalem from Jericho, and some believe that its name [Adummim: “red places”] is probably due to the red rocks there. Another probability of the meaning of Adummim is that of Eusebius [a Greek Christian historian, who later became the Bishop of Caesarea Maritima] who has identified the place as the road with a village named “Maledonmnei”. The Latin name for this village refers to it as the “ascent of bloodstains”, probably due to men’s blood spilled there by  thieves. Jesus used the Ascent of Adummim as the setting for the parable of the ‘Good Samaritan’, in which a Jew that had been robbed and beaten by thieves was ignored by two elite Jews (a priest and a Levite) and only the Samaritan stopped to help (Luke 10:27-37).

Being the fearful and uninviting place it is, the wilderness of Judea is referred to by Prophet David as the “valley of the shadow of death” (Psalm 23), and people avoided crossing it, unless they had no alternative shortcut to their destination.

Nevertheless, for others it has been a suitable place of seclusion. Monks have chosen it to be their new home following the ‘Desert theology’ of the Old Testament. For centuries, the wilderness of Judea has been the center for many Monks who followed the footsteps and life-style of Jesus, who departed to the desert for forty days where He prayed and fasted, to set us an example of how praying and fasting should be (Matthew 4:1-11, Mark 1:12-13, Luke 4:1-13). Monks also follow the footsteps of Prophet Elijah and  St. John the Baptist, to whom they may connect most, since St. John was, in all four Gospels, referred to as the “voice crying in the wilderness,” in fulfillment of Isaiah’s prophecy for the one who would prepare the way for the Messiah (Isaiah 40:3). In preparing the way for the King of Israel, St. John used the rough hills and rocky valleys of the Wilderness of Judea as a metaphor for the hard hearts of the people.

The desert Monks are often called ‘Hermits’, based on the Latin and Greek words ‘eremita’ and ‘eremites’ [meaning: of the desert]. Initially many of these Monks were pilgrims who toured the Holy shrines and became overwhelmed by the spiritual experience, resorting to a full devotion to God. In the beginning of the Christian era there were only a few Hermits in the caves of the Judean desert. However, during the Byzantine period between the 5th and the 6th century, the Wilderness of Judea hosted more than 65 Monasteries with approximately 10,000 – 30,000 Monks.

There, in the middle of the Judean desert one can easily go back in time. Very few places in the Holy Land have sustained the landscape as it initially appeared for thousands of years. And probably one of the best places to stand and observe the Wilderness of Judea, might be the Monastery of Saint George.

This Greek Orthodox Monastery was founded in the late 5th century AD. It is believed that John of Thebes [who was an Egyptian Monk and had moved to the Judean desert in 480 AD] had started the Monastery after he met a group of Syrian hermits who were settling around  the cave  that is believed to be the place where Prophet Elijah was fed by the Ravens (1 Kings 17:5-6). On a different history account, the Bishop of Caesarea Maritima at that time ‘Juanis’, had abandoned his duties as a Bishop and came to the desert, and attracted many Monks there by his ascetic example.

This Monastery was named after its two most famous Monks, St. John and St. George of Chozeba, who both were the main organizers and thanks to them the Monastery has flourished and attracted many Monks. The biography of St. George suggests that he left Cyprus at a young age to fulfil his dream of living the ascetic life in the Holy Land after both his parents died. During His time the Monastery became an important spiritual center in the 6th century.

In the 7th century the Monastery went through rough phases of destruction during the Persians occupation to the Holy Land, and all 14 resident Monks at that time martyred. When the Crusaders took over the Holy land they rebuilt the Monastery in the 12th century. Several years later the Monastery went under complete restoration campaigns which ended in 1901 under the supervision of the Greek monk ‘Kallinicos’.

It is noteworthy that the Monastery of St. John and St. George has witnessed the unfortunate deaths of great Monks and Priests who served and lived there. One of them was Father ‘Antonios’ who was killed when the stones of the walls fell on him during the restoration of the Church. There is also the incident of Father ‘Germanos’ who was murdered on his way to the Monastery from Jerusalem. Father ‘Amphilochios’, who was the Hegoumen at the Monastery, and had greatly contributed to the maintenance and renovation of this sacred place, had also died in the Monastery after being a Hegoumen there for 30 years.

Currently, the Monastery is being supervised and taken care of by Father ‘Costantinos’, who has been appointed as the Hegoumen of the Monastery by His Beatitude our Father and Patriarch Theophilos.  Fr. Constantinos and his monks have successfully renovated the place to what our eyes can witness today.

This three-level Monastery complex has two main Churches, the Church of Theotokos and the Church of St. John and St. George. Both these Churches contain a rich array of icons, paintings and mosaics. However the second has a mosaic floor dating back to the 6th century and a glass casket encloses the incorrupt relics of St. John “the new Chozebite”, who was from Romania and died in 1960. He was canonized a Saint by the Jerusalem Patriarchate in 2015. In His memory, an annual all-night Vigil is led by His Beatitude our Father and Patriarch of Jerusalem Theophilos.

Beside the two main Churches inside the Monastery, there are stairs from its inner court which lead up to a Chapel of Prophet Elijah [where it is believed he was fed by the ravens]. From this cave, a narrow tunnel provides an escape route to the top of the mountain. Also inside the Monastery there are couple of tombs for some of the Monks who had previously lived and served there. Another story linking to this Monastery is the large cave above which it is believed that St. Joachim, father of Theotokos, had grieved over the barrenness of His wife, St Anne, until an angel appeared and assured Him that she would conceive.

Last but not least, this Monastery is well known for its hospitality for all pilgrims and visitors who come from all over the world.