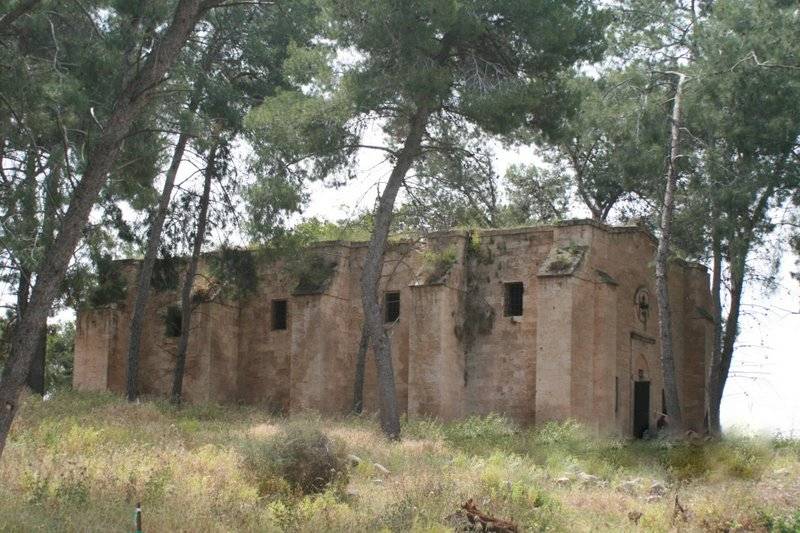 THE PALESTINIAN VILLAGE OF MA’LUL – REMAINS OF SHRINES

12 km to the west of the city of Nazareth, a rugged country road leads us to a hill covered with pine trees. As our vehicle starts to go through this pine forest, we may get the sense of domination and power. But as we ascend towards the top of the hill, 275 meters above sea level to be exact, this forest can`t stop giving us a sad vibe of loneliness. We might get a little disappointed to see that there is no one or anything to welcome us as we step from our vehicle and walk around. Little do we know, that this piece of land was once overcrowded with houses. The origin of the spot where we`re now standing dates back to the times of the Canaanites, and the origin of the hill we are about to explore used to be a village, and for a certain period of time this village was populated with Palestinian residents.

Since the village of Ma’lul is no longer inhabited, it may be almost impossible to find some or any of the elderly residents who usually take the responsibility of narrating the history of their villages and towns. Our only resort is books. And much to our surprise we find that the village of Ma’lul was mentioned in quite a few. For example, “Our country Palestine” by Mustafa al-Dabbagh, gives us a clue for the meaning behind the name ‘Ma’lul’, which may mean ‘entrance’ or ‘gate’. Or it even may have descended from ‘Ahalul’, the original Roman village which is believed to have previously stood on the spot now taken on by Ma’lul. The evidence which led to such conclusion is due to the fact that there, near the village, stands a magnificent Roman mausoleum, then called “Palace of the monastery”, and some consider it a proof that the place was peopled during the Roman era.

Ma’lul used to occupy a large piece of land if compared to other villages. In the year 1945 the total area of ​​the village reached 4698 acres, 30 acres of which were occupied by roads and valleys, 2719 acres were Jews’ property, and 700 acres were planted with olive trees. And although the people of Ma’lul used to cultivate and plow the land of their village, they did not own the land. They had to rent it from the Lebanese family of Sarsaq, whom had previously acquired the land.

If compared to the first census conducted in 1596, we find that Ma’lul had little population during that time (only 77 people). But these numbers started to grow slowly and gradually as time passed. And since the village had both Christians and Muslims, we notice that their numbers were close, at the beginning. For example, in 1912 there were approximately 235 Christian Orthodox and 296 Muslims, both living the simple life of farming and ranching. However, in 1945 these numbers went down to reach 200 Christians and 490 Muslims. The last census of 1948, the year that witnessed the Palestinian Exodus, shows that Ma’lul had a total of 800 people.

And since staying was not an option, in the wake of the 1948 war, people of Ma’lul had to leave their homes and resort to the nearest safe point. Some of them resorted to Nazareth and Jaffa, while others took shelter in Syria and Lebanon, or by the Palestinians in the villages of Lower Galilee., According to the Israeli historian Benny Morris, Ma’lul was occupied during the second phase of ‘Dikal’ military operation on July 15, 1948, one day before the city of Nazareth.

Today, the village of Ma’lul is completely empty, and the houses have been settled to the ground. All we can find when we visit the site are two Churches, a wrecked mosque, and few tombs belonging to the old Islamic cemetery.

One of these two Churches belongs to the Melkite Catholics, but the second one, which lies there on top of the hill surrounded by pine trees, is an Orthodox one, its history dates back to more than 350 years ago. And carries the name of ‘The Ascension of the Lord’ and ‘Prophet Elijah’.

Despite the lack of definite facts about this Church, it can be expected that it might have been affected by the overall situation that prevailed in the region at that time. As a result, the Church of Ma’lul is covered with wild plants and weeds on the outside, and cracked eroded walls on the inside. The reason for the Church to reach this unfortunate state was due to the fact that the Israeli Army had an absolute occlusion over the area of the village, where no one and nothing were allowed inside. The Patriarchate of Jerusalem has lost all control over the Church. However, thanks to continuous and sincere efforts from His Beatitude, The Patriarch of Jerusalem Theophilos III, and the support of the Hagiotaphite, the Patriarchate regained control over the Church once again, and carried out an immediate rehabilitation project.

Starting off with extensive cleaning campaigns to remove the weeds and trash, a long and arduous process followed, to restore the Church of Ma’lul inside out. The rehabilitation project was completed in 2014, under the command of His Beatitude the Patriarch of the Holy City Theophilos III, with the funding of the Hagiotaphite Brotherhood.

Last but not least, it is very important to note that the Divine Liturgy is celebrated on a monthly basis in the Church of Ma’lul. Although the village is currently uninhabited, this does not affect the desire of the Jerusalem Patriarchate to revive the legacy of the Christian faith in one of the villages that was once home for some faithful Orthodox Christians.

The annual Feasts at the Church of Ma’lul are,the Ascension of the Lord, usually held on the same day of the Feast, and is led by the Most Reverend Metropolitan Kyriakos of Nazareth and the Feast of Prophet Elijah, which is usually held on a Saturday (either the one before or after the actual day of the feast). This one in particular is led by His Beatitude our Father and Patriarch of Jerusalem Theophilos III, with co-celebrants the Metropolitan Kyriakos of Nazareth, the Most Reverend Archbishop Aristarchos of Constantine and Geronda Secretary-General and the Hegoumen of the Holy Monastery of the Transfiguration in Mount Tabor Archimandrite Hilarion, who happens to be the patron of the Church of Ma’lul, as well as a number of other Hagiotaphite Hieromonks, and Deacons. These Feasts are usually attended by members from the community of the city of Nazareth, and occasional pilgrims.