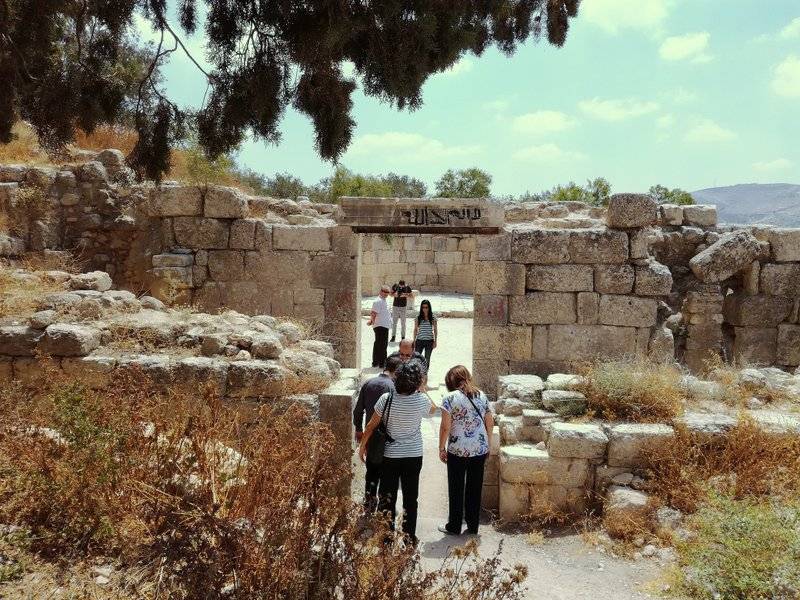 THE TOWN OF SABASTIYA: HISTORY, ARCHAEOLOGY AND ITS RELATION TO ST. JOHN THE BAPTIST

The town of Sabastiya, which is located 12 kilometers northwest of the city of Nablus, may seem just another modest town at first. However, this quickly starts to alter as we approach the ‘Historic Site’ of the town. Just as we draw nearer to the public square, which is located at the heart of the town, a huge ancient building welcomes us from the north. The building has the name of ‘The Mosque of Prophet Yahya’ (Yahya is Arabic for John), but the exterior of this building does not suggest it is a mosque, except for the minaret part, of course. The reason behind this is simple: it was not meant to be one. Originally, the building was one of the largest Cathedrals built in The Holy Land by the Crusaders, second biggest to be exact, after the Cathedral they built for The Holy Sepulchre in Jerusalem. The reason behind that may be because it held such a significant meaning, that they had no choice but to prioritize it before other holy sites. In that Church lies the tomb of the greatest among the Prophets, St. John the Baptist.

As we continue our on-foot tour towards the Historic Site, we reach a large square, with no modern buildings but two souvenir shops. There, a long historical journey begins, one that takes us back in time to the early Bronze Age (3200 BC), and something about this place forces us to feel different, perhaps because we are standing at the spot what witnessed the succession of many historical periods and the passage of glorious civilizations, dating back to more than 10,000 years ago. Canaanite, Israelite, Hellenistic, Roman, and Byzantine civilizations, all have succeeded in leaving their very own imprint on the town.

This series of monuments continues to the top of the hill, which contains the remains of an ancient Greek Orthodox Church, also used to be a Byzantine Cathedral. This one tells the story of St. John the Baptist’s beheading by order of Herod Antipas.

Being at the top of the hill, every step ahead gives us a vision of what this modest piece of land has witnessed, a Hellenistic Tower on the right, then Roman Steps to what used to be the Temple of Augustus lie just around the corner, before we descend the stairs to meet a Roman amphitheater, and our tour comes to an end. But as we take few steps forward we realize that we go back to where everything started.

The first attempt to build the city on which Sabastiya currently stands (it did not acquire this name until 27 BC), was in 876 BC by King ‘Omri’, the sixth king of the Kingdom of Northern Israel. Since it was located on a hill and completely isolated, therefore easy to defend, Omri decided to move his home from ‘Tirzah’ to his new strategic city, which he later called ‘Samaria’ and made it his capital. The Hebrew name for Samaria is ‘Shomron’ which is derived from the individual [or clan] Shemer, from whom King Omri purchased the site (1 Kings 16:24).

After Omri’s death, his successor ‘Ahab’ was influenced by his Phoenician wife, Jezebel of Sidon, to build a temple in honor of Baal (1 Kings 16:32). Causing Ahab to eventually abandon the worship of Yahweh and encourage idolatry instead, which provoked the wrath of Prophet ‘Elijah’ who prophesized of the heinous death of Ahab and his wife.

During the reign of King Jeroboam II, Samaria flourished economically. His long reign saw the development of aristocracy, which became a symbol of decay in the eyes of the prophets Hosea and Amos. Prophet Micah predicted the fall of Samaria in the hands of the Assyrians in the book of Micah (1:6): “And I will make Samaria as a heap of stones in the field when a vineyard is planted. And I will bring down the stones thereof into the valley, and will lay her foundations bare.”

The prophecy of Micah was fulfilled in 721 BC. When the Assyrians captured the city after a three-year siege, defeating the last king of Israel ‘Hosea’, and leading to the downfall of the kingdom of Israel. The Israelites were captured and carried to Babylon and the land was peopled with Chaldeans.

In 331 BC, Samaria was destroyed by Alexander the Great, during his series of battles against the Persian Empire. The city got converted to a Hellenistic village after the king brought thousands of Macedonian soldiers into it. Some previous excavations revealed three round towers (see photo 14) and huge fortifications with square towers as well as many artifacts dating back to the Hellenistic era.

However, the Macedonian fortifications did not last long and were later destroyed by the Maccabean commander ‘John Hyrcanus’, who following his success in capturing the city of Madaba [in Jordan] after a siege lasted six months, headed north towards Shechem and Mount Gerizim. There, he launched a violent campaign targeting the Samaria area. The siege lasted for a long, tiring year in which Hyrcanus refused to surrender until he captured and destroyed Samaria completely in 108 BC. The city was later rebuilt again by the political and military leader of the Roman Empire Pompey in 63 BC.

The city started to become glorious again after Emperor Augustus (the founder and first emperor of the Roman Empire) presented it as a gift to King Herod the Great (king of Judea at that time) in 27 BC. He started renovating and improving his new city, and settled 6000 inhabitants in it. Herod, later and in honor of Augustus, changed the city’s name to ‘Sebaste’, Greek for ‘Augustus’. He also dedicated the great temple he built in the city to the emperor. (See photo 16)

Herod, who was well known for his love of luxury, built a theatre, stadium and many other public edifices. However, most of his buildings were later rebuilt in the 2nd century AD, under the rule of the Roman Emperor Septimus Severus. Sebaste was also expanded and many new structures were constructed. Even today, we can still view the ruins of the basilica and the forum colonnade from that earlier time period. (See photos 12, 13, 15)

It is important to note that after the resurrection of Christ and his ascension to heavens, Philip, was the first to preach the gospel in Sebaste, with such success that soon Peter and John the Apostles joined him in the field. There, many citizens were baptized and received the Holy Spirit (Acts 8).

According to the Orthodox Christian tradition, it was in Sebaste that King Herod Antipas held the infamous banquet, to celebrate his birthday. And in which Salome danced. [Salome was the daughter of Herodia. The wife of Herod Antipas, who had previously been married to his brother Philip]. According to Mark (6: 21-29), when she danced she impressed the king who swore to give her anything she asked for, that`s when she went out and asked her mother what she should ask for, to which Herodia immediately answered: “The head of John the Baptist”. Herodia had resented St. John and wanted to kill him, because he was fiercely opposed to Herod’s marriage to his brother’s wife, but she could not carry out her intentions since it was Herod who feared John and protected him, knowing he was a righteous and holy man. So she got her golden opportunity when Herod could not retreat after he swore in front of his dinner guests, she got the fulfilment of her demand on a silver platter. The evangelist continues to narrate the details of the event “When John’s disciples heard about this, they came for his body and laid it in a tomb.”

A Greek Orthodox Church was erected at the site of the beheading, and was named ‘The Church of the Head’. A Byzantine Cathedral dating back to the fifth-century was built on it. Its ruins are still present to this day on the southern side of the Roman Acropolis (see photos 1-4).

From early Christian days, the tradition holds that the body of John the Baptist was buried in a tomb adjacent to the graves of the prophets ‘Abdias’ and ‘Elijah’. As mentioned in the translation of ‘The Guide to The Holy Places’ [compiled by Eusebius] where Jerome describes Samaria/Sabastiya as “the place that guards the remains of St. John the Baptist.” In the fourth century AD, the town of Sabastiya included a Christian community that was proud of the fact that the tomb of St. John the Baptist was in their town next to the tombs of the two prophets. But all that remains of that society today is one Christian family consisting of a father, a mother and three children.

According to the accounts of the historian ‘Rufinus’ in 362 AD, it is reported that the pagans desecrated the tomb during the persecution against Christians led by Emperor Julian the apostate. Not only did they burn the remains of St. John, but they also scattered the ashes to the wind. Luckily, some monks [of St. Philip Monastery in Jerusalem] were passing by and were able to save some of the relics of the glorious Saint. A Byzantine Cathedral was built around the tombs, but the Persians destroyed it in 614 AD.

After the success of the Crusaders in their first campaign in 1099, they established the Kingdom of Jerusalem, which formed their largest kingdom in the East and lasted for two decades. During their reign, they restored the Byzantine Cathedral (in 1165) which contains the tombs of the Saints as well as some Roman royal tombs. This Cathedral became the second largest Church in the Holy Land after the Holy Sepulchre Church in Jerusalem.

However, following the defeat of the Crusaders before Saladin in the battle of Hittin in 1187, the Cathedral was converted into a mosque (see photo 6) bearing the name of the ’Prophet Yahya’ (Yahya is Arabic for John). This mosque, which was rebuilt in 1892, still contains the tomb of St. John the Baptist inside a small building topped by a dome in the courtyard of the old Cathedral/current mosque (see photo 5). The tombs can be reached by descending 21 steps (see photo 9) and enter the tomb chamber (see photo 10) with six burial niches set in the wall (see photo 11). As is commonly known, the tomb of St. John is located in the lower row between the tombs of the Prophets Abdias and Elijah (See photo 17).

In spite of the many changes that have occurred to the Cathedral, one can clearly see its distinctive features, including: the large part of the western facade with large sections of the wall (see photo 7), a number of columns (see photo 8) and the apse of the old church. Other ruins the town of Sabastyia still holds are: ruins of the colonnaded street (see photos 12, 13), Hellenistic Tower (see photo 14), Roman Forum and Basilica (see photo 15), steps to where the temple of Augustus stood (see photo 16) and remains of a Roman amphitheater.

After the establishment of the Ottoman Empire in the early 16th century, the town of Sabastiya joined the rest of Palestine under the Ottoman rule, as it appeared in the tax records in 1596 as a part of the area of Mount Sami of the Nablus Brigade. During the British Mandate era, the mandate authorities conducted population censuses for the region and the total number of the town in 1922 was 572 people, including 10 Christians and 562 Muslims. These numbers rose in the next census, which took place nine years later, reaching 20 Christians, two Jews and 731 Muslims.

In the modern days, Sabastiya was under Jordanian annexation after the Arab-Israeli war ended and according to the Armistice Agreement in 1949. The situation continued like that until the 1967 war, known as the Six-Days War, when Sabastiya became part of the Israeli administration as part of Area C, and part of ‘Judea and Samaria District’ according to the Israeli administration term used to designate the West Bank territories except for East Jerusalem.

TRANSLATION OF THE RELICS OF SAINT SABBAS: A JOURNEY BACK HOME