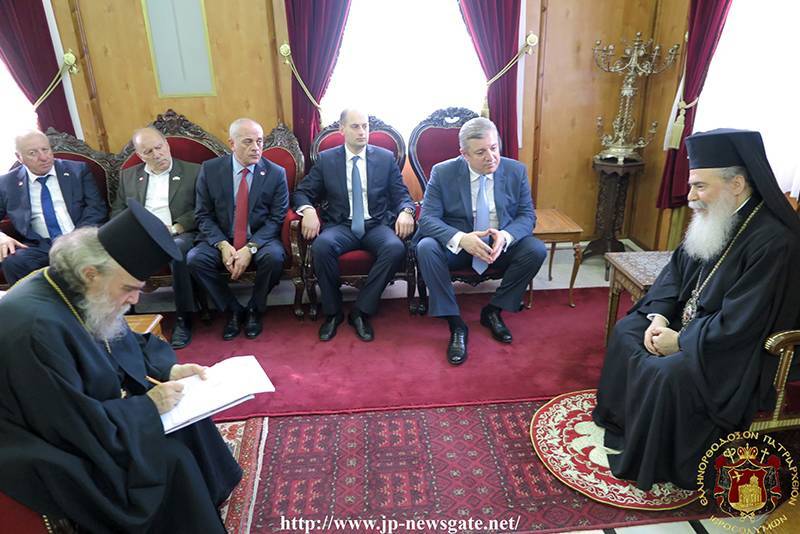 THE PRIME MINISTER OF GEORGIA VISITS THE PATRIARCHATE

The Georgian Prime Minister and his escort were warmly received by H.H.B. our Father and Patriarch of Jerusalem Theophilos together with Geronda Secretary-General Most Reverend Archbishop Aristarchos of Constantina, Dragouman Archimandrite Mattheos and other Hagiotaphite Fathers.

During this visit, the Prime Minister thanked His Beatitude for the good relations that the Jerusalem Patriarchate holds with the Patriarchate of Georgia, for the reception of the Georgian pilgrims and because through his personal attitude He is a factor of political stability.

His Beatitude thanked Mr. Kvirikashvili and referred to the reconciliation and peace-making role of the Patriarchate in Jerusalem and the Holy Land both in the past and at present, especially after His visit at the United Nations Conference for the peace-building in the Middle East.

As a token of recognition and reinforcement of the Prime Minister in peace-keeping, His Beatitude honoured him with the award of the Grand Commander of the Order of Knights of the Holy Sepulchre.

Thanking His Beatitude, Mr. Kvirikashvili for this honourary distinction, which reflects upon the nation and the Church of Georgia, he also thanked Him for his visit at the Holy Sepulchre and the Holy Monastery of the Sacred Cross, and offered Him an icon of the Archangel, while His Beatitude offered him an icon of the Sacred Edicule and the 2000-year medal of the history of the Patriarchate, as He also gave blessings from Jerusalem to the members of his escort.