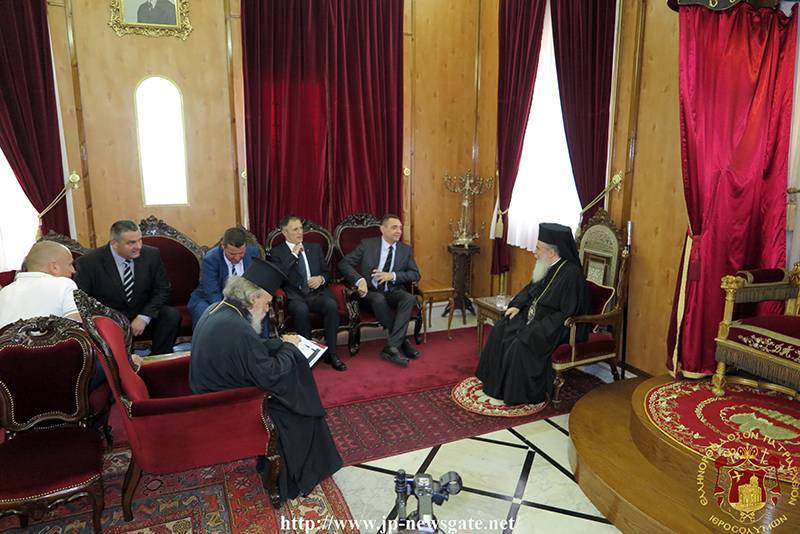 THE MINISTER OF DEFENSE OF SERBIA VISITS THE PATRIARCHATE

On Monday evening, 11th/24th July 2017,  the Minister of Defense of Serbia Mr. Aleksandar Vulin visited the Patriarchate, escorted by his associates and by the Deputy Head of the Embassy of Serbia in Israel Mr. Dejan Blagojevic.

His Excellency the Serbian Minister of Defense and his escort where received by H.H.B. our Father and Patriarch of Jerusalem Theophilos together with Geronda Secretary-General Most Reverend Archbishop Aristarchos of Constantina, Dragouman Archimandrite Mattheos, Archdeacon Mark and Fr. Nikitas.

On this visit, Mr. Aleksandar Vulin expressed his joy for his visit to the Jerusalem Patriarchate for one more time.

His Beatitude referred to the relations of the Patriarchate with the Church of Serbia, to which Kossovo belongs, and which has been split into different parts by the mighty nations of this world, nevertheless, “the gates of Hades will not overpower it” according to the word of the Lord.

The Jerusalem Patriarchate, promoting the reconciliation and togetherness in the Holy Land, supports the ascending course of the Church and the nation of Serbia.

The Jerusalem Patriarchate keeps the Judaic and Christian shrines as places of worship of God, spiritual refreshment and regeneration of the people.