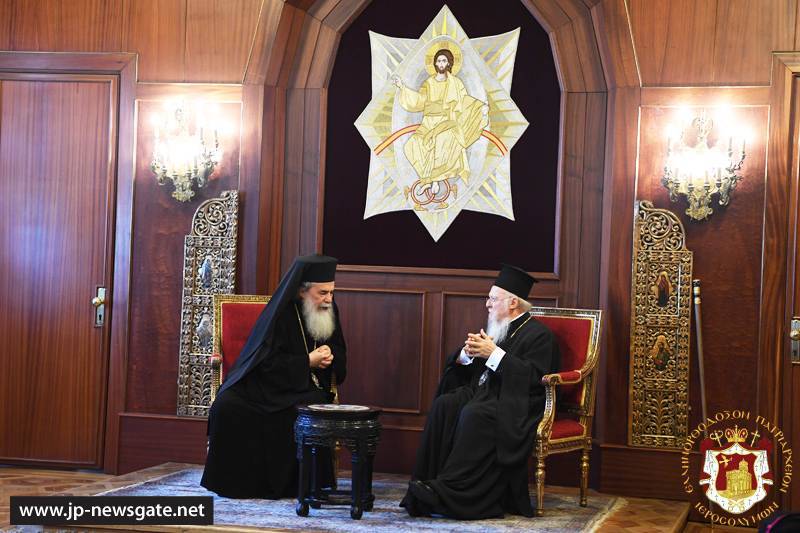 The visit of His Beatitude our Father and Patriarch of Jerusalem Theophilos at the Ecumenical Patriarchate and later on to Cappadocia began on Friday, 3rd/ 16th June 2017.

His Beatitude was invited by the All-Holy Ecumenical Patriarch Bartholomeos for this visit, as the latter has undertaken pilgrimage tours to Churches and Holy Monasteries of our nation which have been deserted since the exchange of populations in 1922.

The Entourage of His Beatitude the Patriarch of Jerusalem for this visit was the Most Reverend Archbishop Aristarchos of Constantina – Geronda Secretary-General, the Patriarchal Commissioner in Constantinople Most Reverend Archbishop Nectarios of Athedona and Archdeacon Marc, and the Honoured Mr. Theodoros Giagkou, Law Professor at the School of Theology in Thessalonica with his respected wife.

Upon His arrival to Constantinople airport from Tel Aviv, His Beatitude was welcomed by the Metropolitan Theoliptos of Ikonion of the Ecumenical Patriarchate and the Patriarchal Commissioner of Jerusalem Patriarchate in Constantinople Most Reverend Archbishop Nectarios of Anthedona.

In the evening the Ecumenical Patriarch offered His Beatitude the Patriarch of Jerusalem dinner at the Intercontinental Hotel where He was hosted.

DEPARTURE TO CAPPADOCIA – 1ST DAY OF THE VISIT

The departure from Constantinople airport to Caesarea with Cappadocia as the final destination, took place on Saturday 4th/17th June.

Escorts of the All-Holy Ecumenical Patriarch Bartholomeos to this pilgrimage were, His Beatitude the Patriarch of Jerusalem Theophilos and His Entourage, the Most Reverend Metropolitan Germanos of Tranoupolis of the Ecumenical Patriarchate, the Most Reverend Metropolitan Vassilios of Constantia from the Church of Cyprus and His Entourage, and the Roman-Catholic Church Delegation.

From Constantinople, His Beatitude landed in Caesarea, from where He was driven to the archaeological site of Korama valley. On site, still preserved are God-naturally-created buildings which have undergone pyramid shaped interior alterations, in order to serve as houses, or Churches and Holy Monasteries for our ancestors. The Patriarchal Entourages were received there by the Museum Manager of the Archaeological site of Korama valley. During this guided tour he mentioned that Korama is the third most visited archaeological site in Turkey after Ephesos and Hierapolis. There are 250 Churches preserved in the area, for which maintenance attempts are being made through donations.  In one of these two Churches there are preserved marvellous 10th century frescoes on the rocks. The one of these two Churches is currently named “The Dark Church” due to the lack of light. Out of the many frescoes, most vividly visible are the icons of Christ the All Mighty, the Holy Communion, the Holy Transfiguration, and that of St. George the Great Martyr.

On the same Saturday afternoon, Vespers was officiated by the Ecumenical Patriarch at the deserted Church of St. Demetrius of Aravissos Community.

SUNDAY, 2ND DAY OF THE VISIT IN CAPPADOCIA

On Sunday, 5th/ 18th June, the Divine Liturgy was celebrated at the Holy Church of Saints Constantine and Helen in Sinassos town. This Divine Liturgy was led by His Beatitude the Patriarch of Jerusalem Theophilos, with the participation in prayer of the All-Holy Ecumenical Patriarch Bartholomeos.

During this Divine Liturgy, His Beatitude the Patriarch of Jerusalem gave the following address:

“All-Holy and Most Reverend Archbishop of Constantinople, New Rome and Ecumenical Patriarch in Christ God, Bartholomeos,

By the inspiration, instruction and consolation of the Comforter Spirit, after a multiannual and laborious preparation, at the initiative and coordination of Your most dear and respectable All-Holiness and the Synodic cooperation of the Autocephalous Orthodox Churches, one year ago, we were gathered at the Great Synod of Orthodoxy at the Apostolic Church of Crete and thoroughly considered essential matters of the life of our Orthodox Church, we participated in daily Eucharistic experience, denoting by the communion of the common Chalice our unity in our Orthodox Apostolic faith and tradition and bore witness of righteousness, peace, reconciliation and love to the world.

With the collaboration of the Divine Grace, Our Humbleness together with the Hagiotaphite Brotherhood around us, were deemed worthy only three months ago to celebrate the event of the restoration of the Sacred Edicule of the Holy Sepulchre at the Pan-Christian Ceremony which Your All-Holiness honoured with Your presence, and Your inspired address, by which You reconfirmed the inscription on its facade, that the Sacred Edicule is indeed “Possession and oblation to Christ of the Orthodox Romans, 1810”. The completion of this project was supported by the Ecumenical Patriarchate also by its financial contribution.

In addition, these days, the Grace of the Holy Spirit has gathered Us again, at Your invitation, to a brotherly meeting in Christ and visit of the blessed places of Cappadocia, where the life-giving and salvific Evangelic word has been sawn since the Apostolic years, and where, among others, great Church Fathers such as the Saints Basil the Great, Gregory of Nyssa, Gregory the Theologian, Amphilohios of Ikonion, lived and progressed in life in Christ and ascesis and Theology writings, interpreted and defended the doctrine of the one substance of the Son with the Father and the Divinity of the Holy Spirit. Following their path Roman Orthodox ancestors of ours had lived for centuries, in these very places, established Communities and Holy Monasteries, erected splendid marble churches, masterpieces of the Byzantine Architecture, which painstakingly they had to abandon together with their ancestral places of residence, when this was imposed by the transitions of the human history.

One of these Communities was Sinassos town. It was overly and exceptionally distinguished in faith and reverence, in education and writings, in merchandise and art, in social and charitable action. Rightly the memorable Metropolitan Cleovoulos of Caesarea says that it is: “An Oasis in the desert, a Star in the darkness, Athens in Asia Minor”.

Its Cathedral had been that of Saints Constantine and Helen, the Patron Saints of the All-Holy Shrines of our Zion Church and the Hagiotaphite Brotherhood, and founders of Romiosyne. Celebrating the Divine Liturgy in it today, we are blessed, sanctified and we pray for the repose of the souls of our fathers who sleep in the Lord herein, certainly rejoicing with Us this day. Likewise, we pray for the peace and good condition of the whole world, the cessation of wars and abhorrent terrorist acts, the consequence of which is the loss of the lives of many of our fellow men, for whom Christ died.

For this prayerful and Eucharistic offering of our Most Merciful God, we glorify Him gracefully, as we also thank Your All-Holiness, who kindly invited Us, and we pray that God may grant You longevity and undiminished health, so that in Your distinguished experience and wisdom You may direct the Ecumenical Throne matters and rule and coordinate the matters of the Orthodox Churches and continue in Your initiatives for the protection of these Cappadocian monuments of our tradition, which have been recognized to be preserved as parts of the worldwide cultural heritage, until their restoration to the condition and purpose to which they were initially founded, in due course, that our Lord knows, for the glory of His worshiped Name and praise of the blessed nation of the Romans. So be it.”

HIS BEATITUDE THE PATRIARCH OF JERUSALEM THEOPHILOS CELEBRATES THE D. LITURGY ON SARANTARION MOUNT