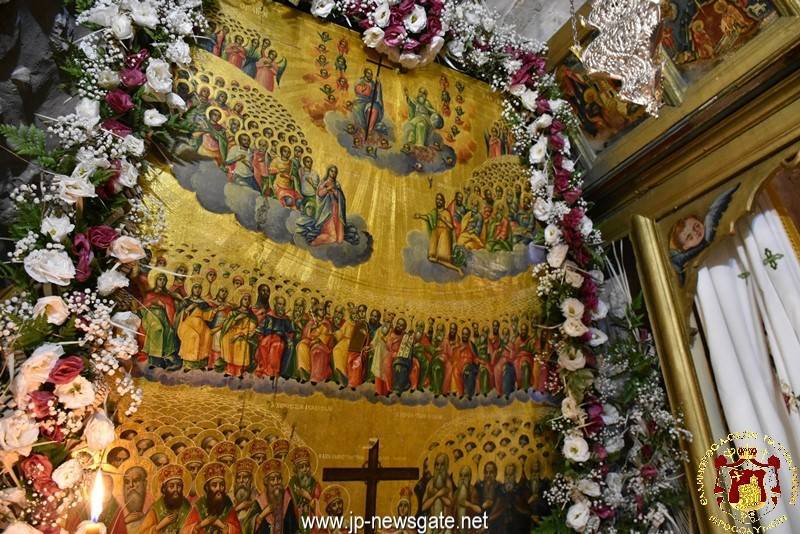 THE FEAST OF ALL SAINTS AT THE PATRIARCHATE (2017)

On Sunday, 29th May, day of the memory of the Martyr St. Theodosia the Virgin, according to the unmovable cycle of feasts and day of the memory of the Constantinople fall and 9th June, the Patriarchate celebrated according to the movable cycle of the Pentecostarion feasts the feast of the All Saints, who were fruit of the inspiration of the Holy Spirit, at the chapel inside the Holy Church of the Holy Monastery of Sayda Naya.

The festal Divine Liturgy was led by the Most Reverend Metropolitan Isychios of Kapitolias, who gave the following Sermon to the congregation that had filled the chapel;

“With the Sunday of All Saints, the movable cycle of feasts that began on the Sunday of the Publican and the Pharisee comes to an end.  The Church has presented us with the complete work of Divine Providence in the contrite Triodion and the joyful Pentecostarion, with the Feast of Pascha as the central event. We saw the fall of the first created people and the rectification of our nature through Christ’s Resurrection. We welcomed the coming of the Comforter in the world and celebrated the birth of a new people of God, the inauguration and the infusion of the Holy Spirit “on all flesh”. Closely connected to this feast, is the present feast, the seal and the end of the festal period.

It comes therefore as the proof of the work of the Church, of the impact of the Holy Spirit in the world. Because it presents us with the fruits of that harvest, the harvest of the white fields–nations that the Apostles were sent to reap. And as Nikiforos Xanthopoulos comments very nicely on the Synaxarion of the day: the most divine Fathers established this feast after the descend of the Holy Spirit, in order to show that through the Apostles, the presence of the All-Holy Spirit managed to sanctify and make the human nature wise, and restore the people to the state of the angels through Jesus Christ, either with the offering of their martyr’s blood, or by their virtuous life and behaviour. And this is a supernatural work that is being accomplished. The Spirit, God, descends, and man, the earth, ascends. God’s Logos ascends the deified flesh and draws in it those who wish to accomplish works of reconciliation with God.  The so far alienated to God people are united with God and become His friends. The nations offer their beginning, the All Saints.

Nevertheless, there is a second reason that caused the constitution of this collective feast. Many Saints are known and honoured with feasts and celebrations by the Church. However there are many more in whom the Holy Spirit dwelled and made them sanctified. But they remained unknown and inconspicuous. Consequently, the Church honours today those unknown Saints, who “lived according to the teachings of Christ in India and Egypt and Arabia and Mesopotamia and Phrygia and in the countries above the Black Sea; moreover, all over Western Europe and the British isles, or to say it plainly, in East and West.”

The Synaxarist also provides us with a third reason. It would be imperative for all the Saints who are celebrated individually to be gathered in a single common feast, in order to show that way, that all together, they fought for the one Christ, in a common arena, they ran in the arena of the Christian virtue, they were servants of one God and they worthily received the crowns of victory from Him. Likewise, the common feast will be an impulse to the faithful who believe in the same Christ, and are servants of the same God and strive like those (the saints) in the beaten path of the life in Christ. It will be an impulse as well as a certain hope that today’s fighters will accomplish their (the saints’) glory, and they will also be numbered in the chorea of the saints, as they “have borne the burden and the heat of the day” (Mat. 20: 12). This feast could be our own feast tomorrow, when God’s grace deems it worthy to summon us in the blissful world of the triumphant Church in heaven. Because the children of the Church live in this hope; that the words they hear today “on this day, the Sunday after Pentecost, we celebrate the feast of All Saints, who shone forth throughout the world, in North and South, East and West” will be co-celebrated with them someday.

“Of all my Lord’s friends, I laud and sing the praises; and let any to come with them and be numbered.”

Nevertheless, the feast had not always had such a wide context. It was only a feast for all the martyrs. In the 4thcentury we have St. Chrysostom’s sermon on this feast. Moreover, the Typikon of St. Sophia in Constantinople in the 10th century mentions a gathering and Pannychid in the Great Church and in the Church of the Holy Martyrs, located near the Church of the Holy Apostles. The feast is named “All Saints” but the synaxarion of the day specifies that the memory of “all holy martyrs who have martyred throughout the world in different times for the name of our great God and Saviour Jesus Christ” is observed. If Xanthopoulos’ information is correct, the All Saints feast was established during the reign of Leon the Wise, when he built a Church and wanted to honour it in the name of his wife Theophano, who “had greatly pleased God”. He was however advised that it would not be prudent to dedicate a Church to a woman, even if she were a Saint, but who had recently died and the time had not yet given her “the honour and reverence”. The King was convinced and dedicated the Church in honour of “all the Saints throughout the world…” saying “If Theophano is a Saint, she will be numbered among all these ones”.

Regardless the origin of the new feast with the general context, that is, not only for the martyrs but for all Saints, its extension was very successful. Martyrs of Christ are not only those who shed their blood for Christ’s faith and thus sealed their faith and witness. Martyrs are all those who fought the fight of the Christian life and carried patiently Christ’s cross in this world. Martyrs are those who martyred for Christ through the daily martyrdom of consciousness; the confessors, who confessed the good confession “before both nations and kings”; the Hierarchs, who pastured Christ’s flock God-lovingly and sustained the correct faith; the Saints and ascetics who crucified their flesh “together with the passions and the desires”; the worldly people, who lived in the land of temptations and struggling, and nevertheless “behaved” as if they were in heaven; and along with these, the Prophets, righteous and forefathers of the Old Testament, who lived according to the law and “martyred through faith” waiting for the promised land; and exceptionally, the Holiest of the Holies, the Most-holy Virgin and Mother of Christ, the Theotokos Mary.

We honour the Saints with the present feast, setting their life as an example and entreating them to intercede for us to God. Whose Grace and immeasurable mercy be with us all. Amen.”

During the Divine Liturgy H.H.B. our Father and Patriarch of Jerusalem Theophilos came to venerate the Holy chapel together with Hagiotaphite Fathers, as well as the Consul General of Greece in Jerusalem Mr. Christos Sophianopoulos.

The Patriarchal and Episcopal and Consulate entourage as well as the congregation were offered a rich reception by the good keeper and renovator of the Monastery Abbess Seraphima at the Hegoumeneion.