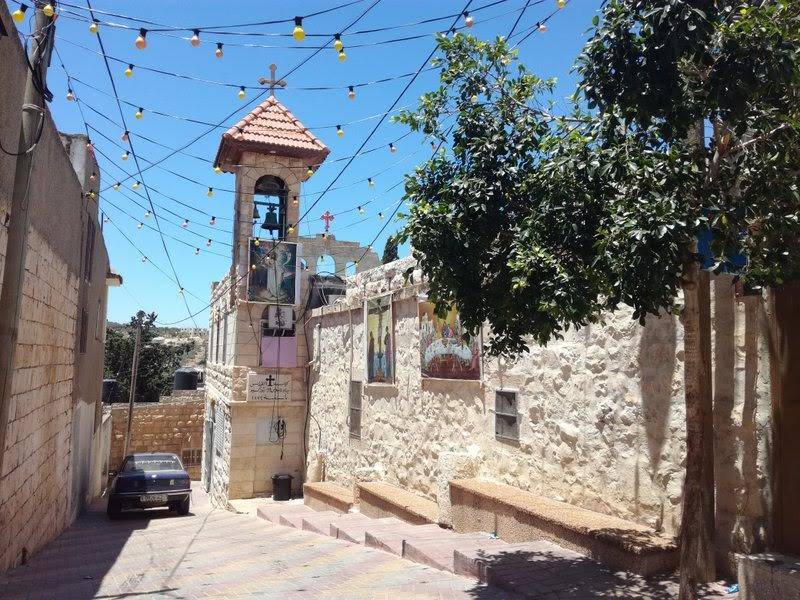 To the north of the West Bank and 15 km to the south-east of the City of Jenin, lies the town of Zababdeh or al-Zababida. The history of this small town dates back to no longer than two centuries. The first people who inhabited this land had fled their countries due to the oppression they suffered at that time.

These people worked in agriculture and livestock until they decided to purchase the land from its original Muslim owners, and named it later Zababdeh. After a period of time they felt the need for a Priest to celebrate the Divine Liturgy and hold the rest of the Church services. According to this request, the Patriarchate of Jerusalem sent them the first Priest to serve in Zababdeh, the Reverend Father Nasser Mikhail Hanna from Beisan, who rested in the Lord in 1913. Later his son, the Reverend Father Ibrahim Hanna succeeded his father.

Therefore, the first ever Christian community to be established in al- Zababida was the Orthodox community, and the Church of St. George which still exists until now was the first Church to be built in this town. Of course the Church was not as it is toda; it was hosted in a Cave with a narrow door, and the engraved inscription on the construction stone of the Church shows that it was built in 1874. However, the extensions were not built until early 1992, when Father Tou`ma Daoud, the current Priest of the Church, was designated to serve in the town of Zababdeh.

The visitor to the Church of St. George in Zababdeh can observe the simplicity of the construction design. Although the Church may not be as old as other historic Churches in Palestine, however the overview suggests the age of the place, and probably the cemetery at the end of the church, where the bodies of five former Priests are buried, has something to do with that feeling.

The most distinctive feature which makes the simple town of al-Zababida outshine other regions, is that it holds the largest Christian community among the cities and governorates of the northern part of the West Bank. The Orthodox community, which is larger than any other Orthodox community in other northern cities or towns, includes about 1000 people, while the share of the Latin parish in Zababdeh is the largest of the Christian doctrines, with approximately 1200 people. The Anglican community follows with approximately 100 people, and the Catholic parish with approximately 70 people. Each doctrine owns only one Church.