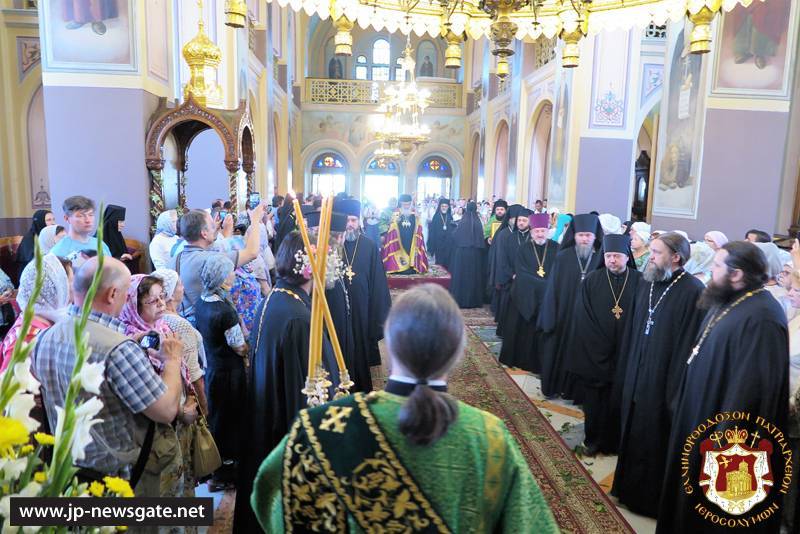 On Monday, 23rd Mary/ 5th June 2017, the Feast of the inspiration of the Holy Spirit was celebrated at the Ecclesiastical Mission (Missia) and its Holy Church of the Holy Trinity of the Moscow Patriarchate, located on West Jerusalem near the New Gate.

This festal Divine Liturgy on Monday of the Holy Spirit was led by H.H.B. our Father and Patriarch of Jerusalem Theophilos, invited by the aforementioned delegation which belongs to the jurisdiction of the Patriarchate.

Participants in the Divine Liturgy were a congregation of Orthodox Russian citizens of Jerusalem, who belong to the pastoral care of the Jerusalem Patriarchate, and pilgrims from Russia and Arab-speaking Orthodox faithful.

His Beatitude preached the divine word to this congregation as follows:

“We celebrate Pentecost and the coming of the Spirit, and the time appointed for the promise, and the fulfilment of hope. How great is this mystery: it is both exceeding great and most venerable. Wherefore, we cry unto Thee: O Creator of all, Lord, glory to Thee”; St. Gregory the Theologian exclaims through the voice of the hymn writer of the Church.

Most Reverend Archimandrite Father Alexander, representative of His Beatitude the Patriarch of Moscow and all Russia in Jerusalem,

The One who has been ascended in glory in heavens and sat on the right side of God the Father, and has sent down to His Holy disciples and Apostles the divine and holy and consubstantial and of the same force and of the same glory and coeternal Spirit, gathered us all in this named after the Holy Trinity magnificent Church, in order to celebrate in thanksgiving the Feast of Holy Pentecost and thus the coming of the Holy Spirit, namely Its coming in the world.

The sending of the Comforter, namely the Holy Spirit, was an explicit promise of the Lord to His disciples according to the evangelists. “It is expedient for you that I go away: for if I go not away, the Comforter will not come unto you; but if I depart, I will send him unto you” (John 16:7). “And, behold, I send the promise of my Father upon you: but tarry ye in the city of Jerusalem, until ye be endued with power from on high” (Luke 24:49). And this promise was fulfilled on the fiftieth day after the bright Resurrection of our Saviour Jesus Christ, in the upper room of Jerusalem, where “they were all with one accord in one place. And suddenly there came a sound from heaven as of a rushing mighty wind, and it filled all the house where they were sitting. And there appeared unto them cloven tongues like as of fire, and it sat upon each of them. And they were all filled with the Holy Ghost” (Acts 2:1-4).

The indeed great and unintelligible mystery of Pentecost is the inauguration of the revelation on earth of the secret body of Christ, namely the Church, whose pertaining to God-manhood institution is maintained and assembled by the coeternal, consubstantial and sharing the same throne with the Father and the Son Holy Spirit, as the hymn writer of the church effectively expresses: “The Holy Spirit provideth all things; He gusheth forth prophesy; He perfecteth the priesthood; He hath taught wisdom to the illiterate. He hath shown forth the fishermen as theologians. He holdeth together the whole institution of the Church. Wherefore, O Comforter, one in essence and throne with the Father and the Son, glory to Thee”.

The exuberance of the Holy Spirit which filled the Apostles is the same divine power which mesmerized the whole world and enlightened it with the light of truth and justice. Precisely to this cause were the Holy Apostles and Christ’s disciples called, to whom Jesus spoke, saying: “All power is given unto me in heaven and in earth. Go ye therefore, and teach all nations, baptizing them in the name of the Father, and of the Son, and of the Holy Ghost: Teaching them to observe all things whatsoever I have commanded you” (Mat. 28:18-20).

The spreading of the Gospel teaching by the Holy Apostles and Christ’s disciples shone light to the world and also gushed to all the faithful the grace of the Comforting Spirit, the Spirit of Christ, as the hymn writer says: “As Thou didst aforetime promise Thy disciples, Thou hast in every deed sent forth the Comforting Spirit, O Christ, and hast shined light upon the world, O Friend of man”. And “that which was anciently foretold in the Prophets and in the Law is fulfilled; for on this day the grace of the Divine Spirit is poured out on all the faithful”.

As the Synaxarist of todays’ feast effectively mentions, the Holy Spirit was given to the Disciples and Apostles in three occasions; quite dimly before His Passion; after the Resurrection a bit clearer by breathing upon them; and now He sent It down fundamentally; rather It came down by Itself, to complete their enlightenment and sanctification. This denotes that the “Apostolicity” guarantees the unity, holiness and catholicity of the Church as expressed in the Creed of our faith. And as the hymn writer says: “Upon the Apostles did the Holy Spirit descend by His own authority, as Thou didst promise, O Christ, and brought forth one harmony of faith in the Trinity, our God uncreated, from the many languages of all sundry nations”.

The Holy Spirit descended on the Holy Apostles in the form of tongues of fire, St. Chrysostom interprets, in order to remind us of the old story. “Because therefore in the past the people misbehaved in pride, they wanted to build a tower reaching up in the heavens, and through the division of tongues their evil agreement was halted; for this reason now the Holy Spirit is given to them in the form of tongues of fire, in order to assemble the divided world by this”.

Precisely for this reason the grace of the Holy Spirit has gathered us also the sharing the same doctrine and beliefs Brotherly Orthodox Churches, in this bloodless altar, in order to proclaim the agreement and unity in the Holy Spirit and hear St. Paul saying: “the fruit of the Spirit is love, joy, peace” (Gal. 5:22). “Charity vaunteth not itself” (1 Cor. 13:4). And according to St. Chrysostom “love does not work anything bad against our neighbour; where love lives, Cain is nowhere to kill his brother”.

Therefore, beloved brothers and sisters, as we celebrate this Feast, let us cleanse our hearts by the Holy Spirit and accept Its coming, being enlightened in a mystical way. And with St. Gregory the Theologian let us say: “Gather us all into Thy Kingdom; grant forgiveness to them that hope in Thee; forgive them and us our sins. Purify us through the operation of Thy Holy Spirit, and destroy the enemy’s devices which are against us”, and stop the schisms in our brotherly Orthodox Churches. By the prayers of the Most-Holy Theotokos and all the Saints. Amen.”

Soon afterwards there was a short reception at the Hegoumeneion of the Monastery and finally there was a monastic meal in honour of the Patriarchal Entourage, where His Beatitude gave and address in English, as per the link below: