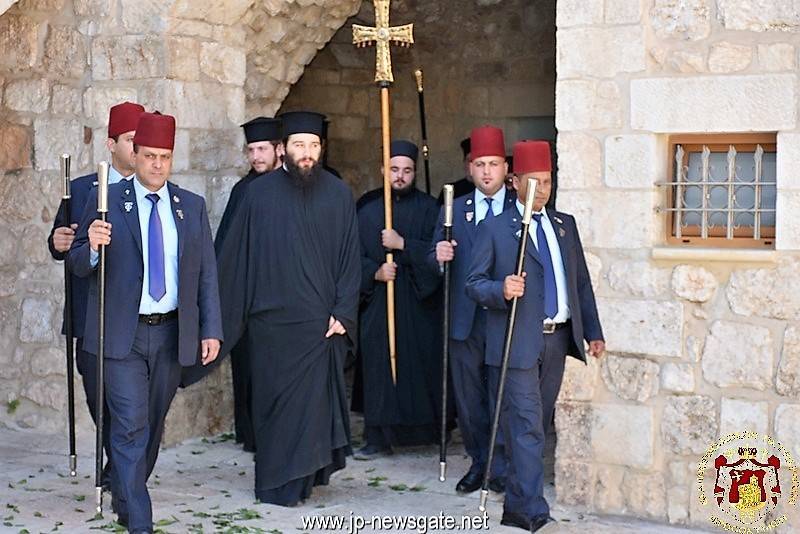 THE FEAST OF SAINTS CONSTANTINE AND HELEN AT THE PATRIARCHATE (2017)

On Saturday, 21st May/3rd June 2017, the Hagiotaphite Brotherhood celebrated the memory of its founders, the glorious God-crowned and equal to the Apostles, the King and Queen Saints Constantine and Helen, at their Holy Church inside the Patriarchate, adjacent to the Most Holy Church of the Resurrection on the west side.

This feast was celebrated with Great Vespers in the evening, led by His Beatitude our Father and Patriarch of Jerusalem Theophilos, with the prayers of Hagiotaphite Archbishops, Hieromonks and monks, first of whom the Typikon Keeper Archimandrite Alexios, and the participation of the dressed Hagiotaphite Hieromonks at the Great Entrance and the Blessing of Bread. Singing were the choir leader of this Church, Archimandrite Eusevios with Mr. George Tombros on the right and Archimandrite Demetrios on the left, at the presence of local Greeks Arab-speaking members of the Jerusalem Community, and pilgrims from Greece, Russia, Cyprus and Romania.

After Vespers, the Hagiotaphite Fathers were served boiled wheat, wine and dried bread according to their custom at the courtyard in front of the Epitropikon.

On Saturday morning, according to the order of the Brotherhood, Matins began at 6:30 a.m. while H.H.B. our Father and Patriarch of Jerusalem Theophilos descended at 8:00 a.m. Once dressed in His cloak, He prayed to receive the blessing and began officiating the Divine Liturgy, according to the order of the Brotherhood, with co-officiating the Hagiotaphite Hieromonks and the Typikon Keeper, Hagiotaphite Archbishops, at the presence of the Consul General of Greece in Jerusalem Mr. Christos Sophianopoulos. Singing on the right was the choir leader of the Church Archimadrite Eusevios and on the left Archimandrite Demetrios, while many pilgrims from Jerusalem, Greece, Cyprus, Russia and Romania participated in contrite prayer.

At the end of the Divine Liturgy, His Beatitude with the dressed Priests, followed by the other Hagiotaphite Fathers went to the Patriarchate in a Procession at the singing of the choir; at the entrance on the Holy Monastery everybody received a small loaf of bread as a blessing for the feast.

At the Patriarchate His Beatitude gave the following address:

“With the oil of gladness Thou, O Christ, in a most marvelous way didst anoint Thy communicants, Constantine and Helen who, hating every deceit and lie, yearned for Thy beauty; and Thou didst freely grant Thy promised Kingdom of Heaven unto them who at Thine own behest first had ruled on earth in godly piety and in true religion” – the hymn writer of the church proclaims.

Our Holy Church, and thus the Church of Jerusalem, rejoices mystically today on the festal memory of its great owners and renovators of the magnificent Churches at the All-holy Shrines on the one hand; and on the other hand it rejoices for the inauguration of the worldwide modern Greece by the glorious and crowned by God and equal to the Apostles great King and Queen, Saints Constantine and Helen.

These holy King and Queen and equal to the Apostles, “not from man did great Constantine with his blest mother Helen receive the royal sovereignty, but by God’s grace from Heaven”, as their hymn writer vigorously formulates, saying: “Having seen the image of Thy Cross in Heaven, and like Paul, having received the call not from men, Thine apostle among kings entrusted the commonwealth to Thy hand, o Lord. Keep us always in peace, by the intercessions of the Theotokos, O only Friend of man”.

Our venerable Hagiotaphite Brotherhood has rewarded glory to the Holy Trinitarian God by celebrating the Patriarchal Divine Liturgy in the homonymous to the Saints King and Queen Monastic Church on their annual sacred memory.  And this is because these King and Queen who have dwelled among the saints, have been the God-inspired founders of the primary Order of the Great Ones, namely the Hagiotaphite Brotherhood in the Holy Land, at the place of the Passion on the Cross, the three-day burial and Resurrection of our Saviour Christ. “For it is right to exhilarate the most wondrous place of the earth according to its worthiness”, Constantine the Great wrote in his Letter to Makarios Archbishop of the Church of Jerusalem, about the building of the “Martyrio” [the Holy Sepulchre](Eusevios: History of the Church, Constantine’s life. Book 3, ch.33).

“In the saints that are in His earth hath the Lord been wondrous; He hath wrought all His desires in them” (Psalm 15:3) prophet David chants. Indeed the Lord made Saints Constantine and his mother Helen worthy of admiration over time and worldwide, because the living witness of our Lord Jesus Christ as well as the presence of the Christians in the Holy Land are owed to them, despite the civil wars and the terrorist acts in the tested Middle East region.

Therefore we on our part who live and serve in this Holy Land exclaim with the hymn writer and say: “Rejoice, O great and all-wise Constantine, thou fount of Orthodox Faith, that dost water continually all the lands beneath the sun with thy sweet and delightful streams. Rejoice, O root from which there sprouted forth the fruit that nourisheth Christ’s most holy Church. Rejoice, thou most glorious boast the fame of all the farthest ends of earth, first of Christian kings. Rejoice, thou joy of faithful men”. Amen. Many happy returns.”

At the end of the address His Beatitude blessed the congregation.

At noon, there was a festal monastic meal.

The funeral service of blessed Archbishop Theophylaktos of the Jordan, according to our...