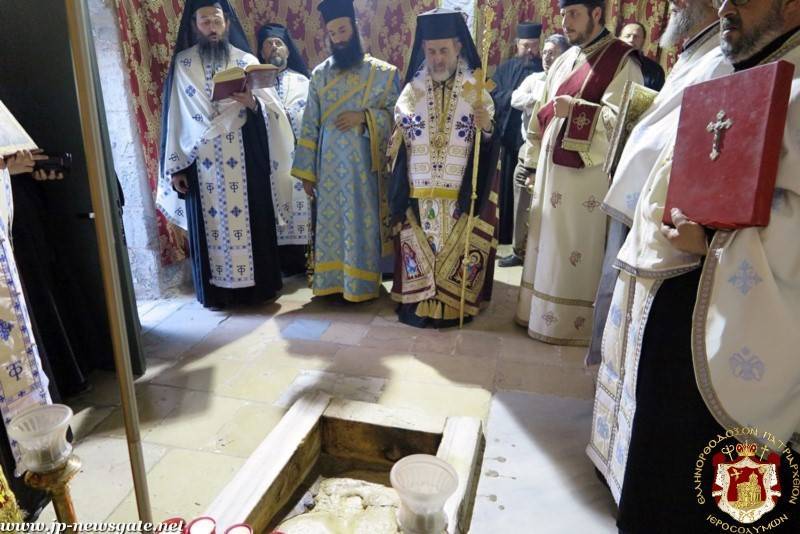 On Thursday, 12th/25th May 2017, the celebration of the feast of the glorious Ascension in the Heavens of the risen from the dead our Lord Jesus Christ was observed.

On this feast, the Church celebrates that which was given to it in the Gospel narratives by the Apostles, namely that the Lord was ascended in the heavens forty days after His Resurrection and sat on the right hand side of His Father, being in the human body that He had received with His incarnation.

The Church of Jerusalem celebrates this event at the very place where it happened, the top of the Mount of Olives.

In the evening the Service of  Sanctification of the Holy Altar was held initially,  followed by Vespers at the Holy Altar placed by the Orthodox faithful on the ruins of the Byzantine Church which is now occupied by the Muslims, together with the Shrine of the footprint of the Lord. The Service was led by the Most Reverend Metropolitan Joachim of Helenoupolis, with concelebrants Hagiotaphite Archimandrites, first of whom was Elder Kamarasis Archimandrite Nectarios, and the Arab-speaking Priests of St. James the Brother of God Cathedral. Singing on the right in Greek, Russian and Romanian was the Choir Leader of the Most Holy Church of the Resurrection Archimandrite Aristovoulos, and Mr. Rimon Kamar was singing on the left in Arabic, in the participation of monks, nuns and pilgrims.

After Vespers there was the Service of the Small Compline with the Canon of the Feast and the Litany to the Holy Monastery of the Men of Galilee, where the 1st Gospel of Matins was read by the Metropolitan. The Most Reverend Metropolitan and the Holy Litany were received by H.H.B. our Father and Patriarch of Jerusalem Theophilos and the Hegoumen of the H. Monastery of the Men of Galilee Archimandrite Anthimos with some other Hagiotaphite Fathers.

After the reading of the Holy Gospel the Holy Litany returned to the Shrine of the Ascension to complete the Service of the Small Compline, which was followed by the Dismissal.

On Thursday, the day of the feast, Matins and the Divine Liturgy were celebrated at the very place of the Ascension of our Lord and God and Saviour Jesus Christ, officiated by the Most Reverend Archbishop Damascene of Joppa with concelebrants Hagiotaphite Hieromonks and Arab-speaking Priests of St. James Cathedral, Hieromonks from the Holy Monastery of Vatopedion of Mount Athos and their Geronda Archimandrite Ephraim and the Hagiotaphite Deacons Fr. Agapios and Fr. Demetrios, at the singing of the choir of Vatopedion Hieromonks in Greek and Mr. Rimon Kamar in Arabic, with the participation of many local Arab-speaking Priests from the neighbouring to Jerusalem and Palestine areas, and pilgrims from various countries such as Greece, Cyprus, Russia, Romania and Ukraine.

During the D. Liturgy, H.H.B. our Father and Patriarch of Jerusalem Theophilos and Fathers of the H. Synod came to venerate, and then, according to the custom, they visited the Imam near the Mosque, Monk Achillios at the Holy Monastery of the Ascension opposite the Shrine, the Russian Nunnery of Ascension and finally the Hegoumen of the Holy Monastery of the Men of Galilee Archimandrite Anthimos, who offered them festal delicacies.