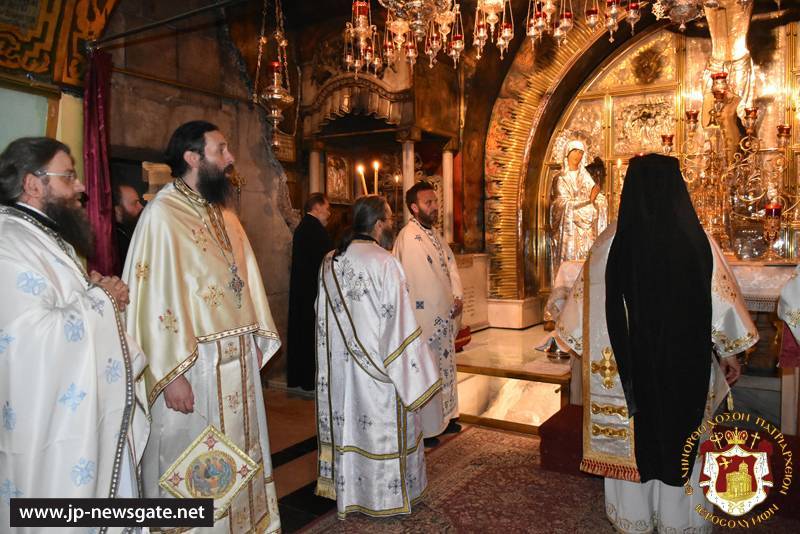 On Saturday, 7th/20th May 2017, the Feast of the Appearance of the Sign of the Precious Cross in the Heavens was celebrated by the Patriarchate.

At this Feast, the Church, and especially in Jerusalem, celebrates the fact that at the time of Cyril the Katechist Archbishop of Jerusalem in 351 A.D., on Pentecost day around the ninth hour of the morning, the Precious Cross appeared brighter than the sun rays, and it was visible from the Horrendous Golgotha to the Mount of Olives; the event caused the surprise, marvel and awe of many people who came out in the streets and gazed at the sight in heaven for a long time, as described by the eye witness of the event, Cyril Archbishop of Jerusalem, in his Letter to Emperor Constantius, Son of Saint Constantine the Great.

In commemoration of this wondrous event, the Divine Liturgy was celebrated in the Horrendous Golgotha, led by the Most Reverend Metropolitan Isychios of Kapitolias, with concelebrants Hagiotaphite Hieromonks, first among whom was Archimandrite Ieronymos, and Hierodeacons, at the singing of the Choir Leader of the Most Holy Church of the Resurrection Archimandrite Aristovoulos and the students of the Patriarchal School of Zion, with the participation of a crowd of pilgrims mainly from Greece and other Orthodox countries as well.

The Divine Liturgy in the Horrendous Golgotha was followed by a thrice litany  around the Holy Sepulchre and then the officiating Metropolitan read the afore mentioned Letter in Greek.

After the Dismissal of the Divine Liturgy the Episcopal Entourage and many of the pilgrims went to the Patriarchate and paid their respect to His Beatitude at the Reception Hall.

Therein, the Most Reverend Metropolitan Isychios of Kapitolias gave the following address:

Twenty centuries ago the cross was a means of dishonest punishment and atrocious death. The Romans condemned the worst criminals to crucifixion.

Today the Cross dominates the lives of faithful Christians in our Church life as a whole, as a means of sacrifice, salvation, joy, sanctification and grace. As St. Chrysostom writes, “this cursed and abhorrent symbol of the worst punishment has now become desirable and adorable”. You see it everywhere. “At the Holy Altar, at the ordination of Priests, at the Divine Liturgy, at homes. So much coveted to all has this wondrous gift, this unspeakable grace, become”.

The Lord Himself revealed in various occasions with supernatural events and wondrous revelations, in a vociferous manner, that the sign of the cross is His symbol and the invincible trophy of the faithful.

If 14th September is the Feat of the Elevation of the Sacred and Life-giving Cross, a feast when human hands, of Patriarchs and Kings, elevated the Sacred Cross, projecting It as the symbol of the Christian faith and “the key hole to Paradise”, because It is our reference point to Him who shed His All-holy Blood on It, the 7th May is another feast of His Elevation, not by human hands this time, but by the “hands” of God Himself. Because He wanted, when the Christian faith had already been accepted and spread, to reveal the Cross in the Heavens, as an extension, so to speak, of His revelation at the reign of Constantine the Great with the known “conquer by it”. The hymnography of our Church propounds this event and spreads it around all its parameters: “The godly ranks of the faithful are exultant, for today a heavenly Cross is seen throughout the world. Gleaming with light unapproachable, the heaven shineth; bright is the air, fair the face of all the earth; singing godly songs , the Church of Christ doth venerate and honour that which protecteth her with strength from Heaven, the most divine and exceeding wondrous Cross”(stichiron of Vespers).

The venerable Jerusalem Patriarchate, following the order and works of the Orthodox Church, honours the feasts among which is today’s feast of “the appearance of the sign of the Precious Cross in Heaven”, which has influenced Orthodoxy around the world, despite the fact that it is a local feast.

Pray, Your Beatitude, that our venerable Brotherhood may continue this tradition to the ages to come.”

The address was followed by the festal reception and the brotherly Hagiotaphite osculation. Finally, His Beatitude offered the pilgrims Easter blessings from Jerusalem.