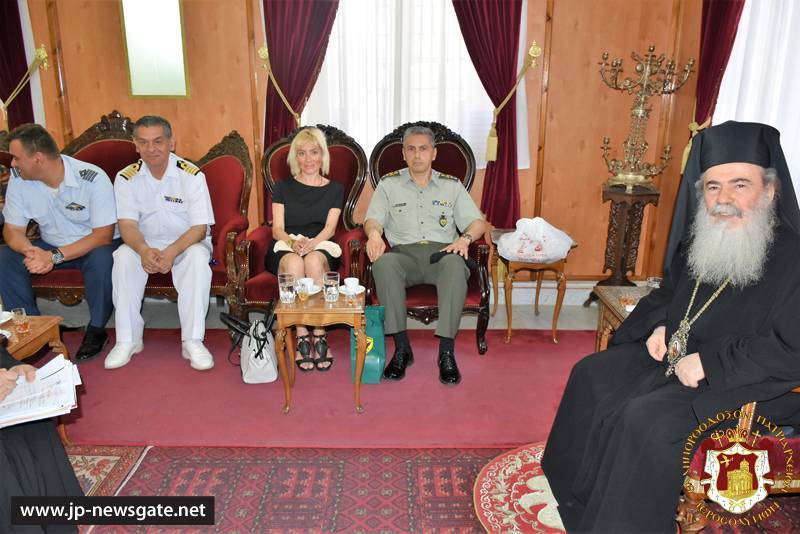 On Friday morning, 6th/19th May 2017, representatives of the Greek Navy, namely, Captain Mr.Papageorgiou and Major General Mr. Stamatiadis, visited the Patriarchate, escorted by the Military Attendant of the Greek Embassy in Tel Aviv Mr. Alexandros Broumas.

These Navy representatives were warmly received by H.H.B. our Father and Patriarch of Jerusalem Theophilos and Hagiotaphite Fathers.

Within the agenda of the meeting the Navy representatives expressed their excitement for their visit to the Patriarchate, which they consider to be a delegate not only of Orthodoxy but also of our Nation in the Holy Land and the Middle East and which projects the values of the Gospel especially at a time when Globalization is being promoted.

To these, His Beatitude added that Globalization is nowadays projected as a new religion, which abolishes the national identity and the national and cultural traditions of the peoples. To questions asked by Mr.Stamatiadis and Mr. Pagageorgiou, if there is ground in the Patriarchate for the cultivation of the interreligious dialogue, His Beatitude said that this dialogue here is the active application of the peaceful and religious-tolerant co-existence of the followers of the three monotheistic religions in the Holy Land.

The Greek Navy representatives thanked His Beatitude for His time and attitude and asked His blessing to continue their veneration in the Holy Sepulchre.