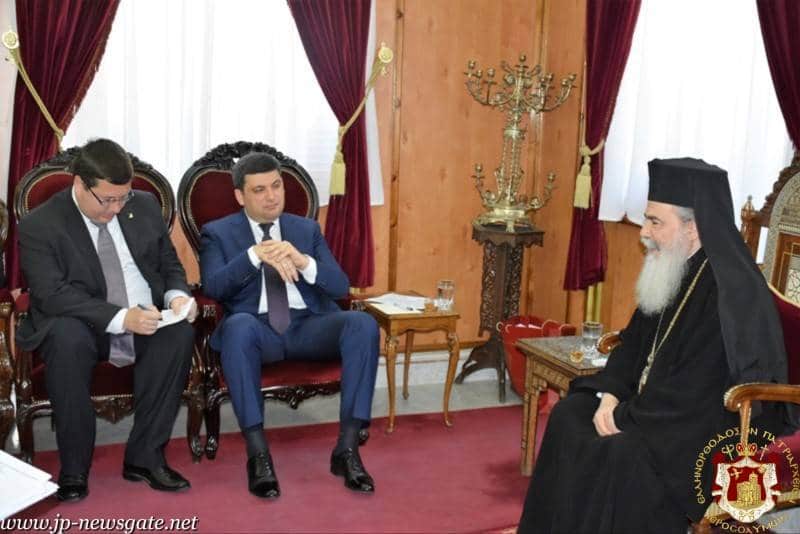 His Excellency the Prime Minister and his exquisite team were warmly received by H.H.B. our Father and Patriarch of Jerusalem Theophilos and Hagiotaphite Fathers, among whom the Most Reverend Archbishop Aristarchos of Constantina, Dragouman Archimandrite Mattheos, Archdeacon Mark.

The Prime Minister thanked His Beatitude, as despite His many duties, He offered time to this visit at the Patriarchate, within the agenda of the P.M.’s visit in the State of Israel, and thanked Him for His position at the critical issue on the Ukraine dispute, which the Ukraine Government is striving to solve without interfering with the Ecclesiastical issue.

His Beatitude thanked the Prime Minister for his words, and referred to the long-lasting bonds between the Patriarchate and Ukraine, since the days of the memorable Paissios, Patriarch of Jerusalem, and expressed the certainty that this issue cannot be solved diplomatically nor politically, but ecclesiastically, under the condition that the men of the Church are not involved in the political issues, nor the politicians in those of the Church. The Jerusalem Patriarchate, as the Mother of Churches, historically promotes Church unity and the solving of national issues of the Orthodox nations. This is the role that the Patriarchate serves, and it promotes through co-operation, as recently shown with the restoration of the Edicule of the Holy Sepulchre, the co-operation for the ecumenical expression of the celebration of this event.

In memory of this visit, and together with the wish for the solving of the Ukrainian issue, His Beatitude offered the Prime Minister a ceramic vase in the shape of a pomegranate, with Jerusalem representations, and blessings from Jerusalem for his wife and Ministers.

The Prime Minister offered His Beatitude a casing with Ukrainian nation emblems, and thanked Him for His position towards the Ukrainian people.