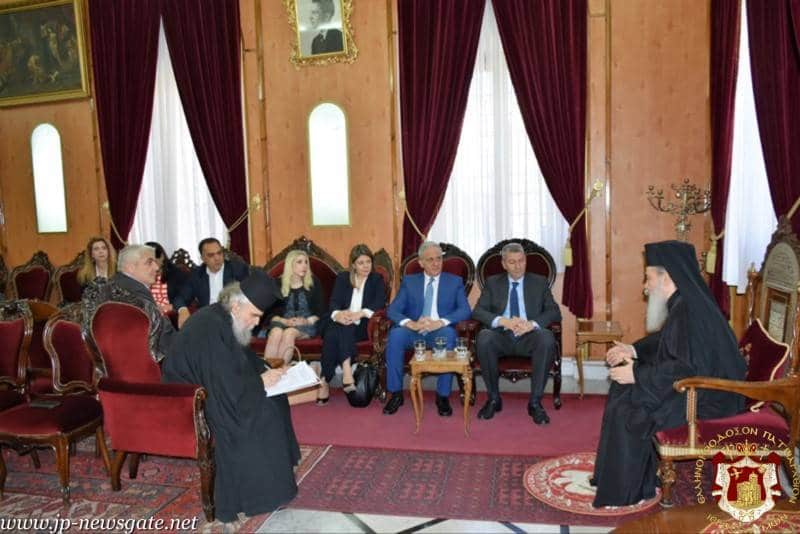 On Tuesday morning, 26th April/9th May 2017, a Foreign and European Affairs Committee of the Parliament of Cyprus, headed by the President of the Committee Mr. George Lillika, visited the Patriarchate, escorted by the Ambassador of Cyprus in Tel Aviv Mrs. Thessalia Siambou.

The Committee was warmly received by H.H.B. our Father and Patriarch of Jerusalem Theophilos with Geronda Secretary-General Most Reverend Archbishop Aristarchos of Constantina, and other Hagiotaphite Fathers.

On the agenda of the meeting there was an interesting conversation on the complicated political situation in Jerusalem, the significance of the area around Solomon’s Temple and on the balancing role of the Patriarchate in finding the solution to this problem.

His Beatitude also explained to the members of the Committee that the Patriarchate is the owner of spiritual and material heritage of great value for the exercise of its pastoral mission in the Holy Shrines and the congregation belonging to its jurisdiction in three countries, Israel, Jordan and the State of Palestine.

His Beatitude also referred to the event of the renovation of the Exarchy of the Holy Sepulchre in Cyprus and the support of the Archdiocese of Cyrpus for this matter.

On the occasion of this visit, the delegation offered His Beatitude  a miniature of a trading ship, while His Beatidue offered them Hagiotaphite blessings.