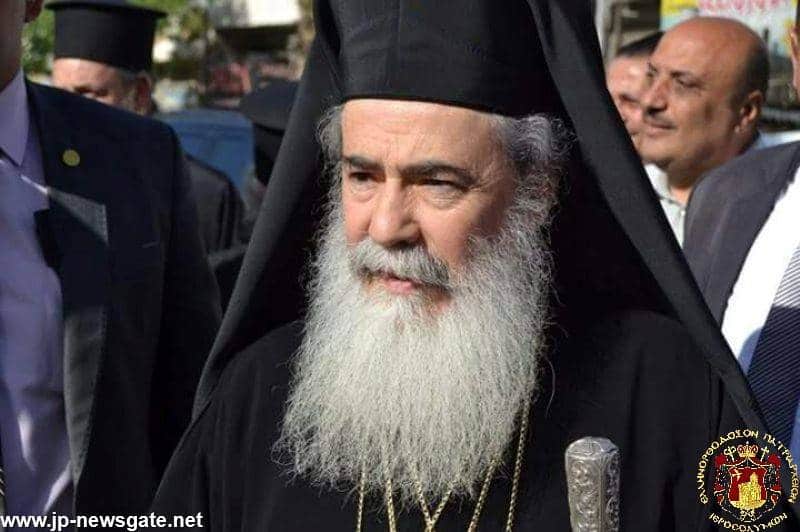 THE PASTORAL VISIT OF H.B. THE PATRIARCH OF JERUSALEM IN JORDAN

On Sunday, 17th/30th April 2017, the Myrrh-bearers Sunday, His Beatitude our Father and Patriarch of Jerusalem Theophilos, celebrated the Divine Liturgy at the Holy Church of the Annunciation in the area of Abdali of Amman in Jordan.

For this Divine Liturgy, His Beatitude arrived on Saturday noon at the Metropolis of the Patriarchate in Amman, where he held meetings and considered various matters related to the Patriarchate. He also visited the Greek Orthodox Arab-speaking Community of the Patriarchate in the town of Zarka, where He was most warmly received by the Head of this Community Archimandrite Athanasios Kakis and the Priest Farah Hadat, the people and the rulers of the town, and He visited the Holy Church of St. George and the Old People’s Home, which is funded by the Community under the service and care of Fr. Farah Hadat.

Co-officiating with His Beatitude on the Myrrh-bearers Sunday were the Most Reverend Metropolitan Benedict of Philadelphia and Geronda Secretary-General Archbishop Aristarchos of Constantina, the Hegoumen of Fhes Archimandrite Ieronymos, the Dean Priest of the Holy Church of the Annunciation – who is over ninety years old – Fr. Constantine Karmas, and other Priests of the Holy Church such as Fr. Evangellos Psiara, Fr. Nectarios Ratzaah, and Archdeacon Marc. Present was the Association of the celebrating on the Myrrh-bearers Sunday, Myrrh-bearing women, and singing were the Choir leader of the Holy Church Mr. Ilias Raband with his helpers, at the participation in contrite prayer of many members of this Parish and Community.

To this pious congregation of this Parish, His Beatitude preached the Divine word as follows:

“Let us arise in the deep dawn and, instead of myrrh, offer praise to the Master, and we shall see Christ, the Sun of Righteousness, Who causeth life to dawn for all” the hymn writer of the Church proclaims.

Beloved Brothers and Sisters in the Resurrected Christ,

The Paschal Feast of the Myrrh-bearing women gathered us all today in this Holy Cathedral of the Annunciation in Amman of the Hashemite Kingdom of Jordan, in order that we offer our Lord and God thanksgiving praises instead of myrrh on His glorious Resurrection.

“Joseph of Arimathea, an honourable counsellor, which also waited for the kingdom of God, came, and went in boldly unto Pilate, and craved the body of Jesus. And he bought fine linen, and took him down, and wrapped him in the linen, and laid him in a sepulchre which was hewn out of a rock, and rolled a stone unto the door of the sepulchre” (Mark 15:43,46). And when the sabbath was past, Mary Magdalene, and Mary the mother of James, and Salome, had bought sweet spices, that they might come and anoint him. And very early in the morning the first day of the week, they came unto the sepulchre at the rising of the sun” (Mark 16:1-2).

In other words my dear brothers, denying the resurrection from the dead means denying Christ’s resurrection and refutes the fact that Christ “died (on the cross) for our sins” (1 Cor. 15:3). “Even as the Son of man came not to be ministered unto, but to minister, and to give his life a ransom for many” (Mat. 20:28). This Christ, “God hath raised up, having loosed the pains of death: because it was not possible that he should be holden of it (death)” (Acts 2:24). In this case St. Chrysostom says “for if Christ was captured by death and He did not destroy its torments, how would He have been able to absolve others, had He still been captured by death?” And St. John of Damascus says: “if there is no resurrection, neither God nor providence exist, and all things are controlled by chance”.

Behold thus why we are called to offer the Lord the hymn of victory, the paschal hymn, instead of myrrh; and behold why the hymn writer exclaims: “We celebrate the death of death, the destruction of Hades, the beginning of an everlasting life. And with leaps of joy we praise the Cause thereof the only blessed and most glorious God of our fathers”.

Christ’s resurrection according to our Eastern Orthodox Church is nothing else but the inauguration, the “beginning of a new life, the eternal one”. It is precisely this other life, the eternal one that Christ’s Cross declares and evangelizes to all. And this is so, because by the Cross, our Saviour Christ obliterated sin and abolished the power of death and corruption.

Behold once more, why “the preaching of the cross is to them that perish foolishness; but unto us which are saved it is the power of God” (1 Cor. 1:18) according to St. Paul. And again, “But of him are ye in Christ Jesus, who of God is made unto us wisdom, and righteousness, and sanctification, and redemption” (1 Cor. 1:30).

Our Holy Church propounds Christ’s faithful disciples, the myrrh-bearing women, because they became the evangelizers of Christ’s resurrection, as the hymn writer of the Church says:“The Myrrh-bearers coming early in the morning and beholding the sepulchre empty, said unto the Apostles: He that is mighty hath destroyed corruption, and hath seized from their bonds those in Hades; proclaim ye with boldness that Christ God is risen, granting us great mercy”.

Moreover, truthful witnesses of Christ’s Passion on the Cross and His Resurrection were his secret disciples, Joseph and Nicodemus, who having removed Jesus’ sacred body from the wood, buried it faithfully.

According to St. Gregory Palamas, the Lord’s resurrection is the renewal of the human nature, the reviving and remodelling and return to the eternal life of the first Adam, who was swallowed by death and through death he regressed to earth of which he was made. Having resurrected Himself on the third day, Christ did not return to earth again, but ascended in heaven, making our flesh that He had received for Himself, sharing the same throne with the Father as identical to God.

In other words, Christ’s resurrection made us free from the slavery of death, sin and corruption. For this reason St. Paul advices us: “Stand fast therefore in the liberty wherewith Christ hath made us free, and be not entangled again with the yoke of bondage” (Galatians 5:1).

To this liberty, the liberty of Christ’s resurrection we are called to become participants, and also preachers and evangelizers, imitating the Holy myrrh-bearing women and witnesses of Christ’s love. Amen. Christ is risen!

On this blessed occasion we would like to express our warmest thanks and deep gratitude to his Majesty the King of the Hashemite Kingdom of Jordan Mr. Abdullah II and his respected Government for their interest in favour of all the religious and Christian communities living in Jordan in a peaceful and harmonious co-existence. We pray that the Lord grants Him and the Royal Family governmental power and health accordingly. Amen.”

And in Arabic in the link below:

Many people participated in the Sacrament of the Holy Eucharist. After Dismissal, His Beatitude honoured the Dean Presbyter Fr. Constantine Karmas with a pectoral cross and an icon for the Holy Church of the Annunciation.

Finally, His Beatitude visited the recently refurbished reception halls of the Holy Church and the ecclesiastical court halls and departed for His visit to the King of Jordan, His Majesty Abdullah II bin al-Hussein.