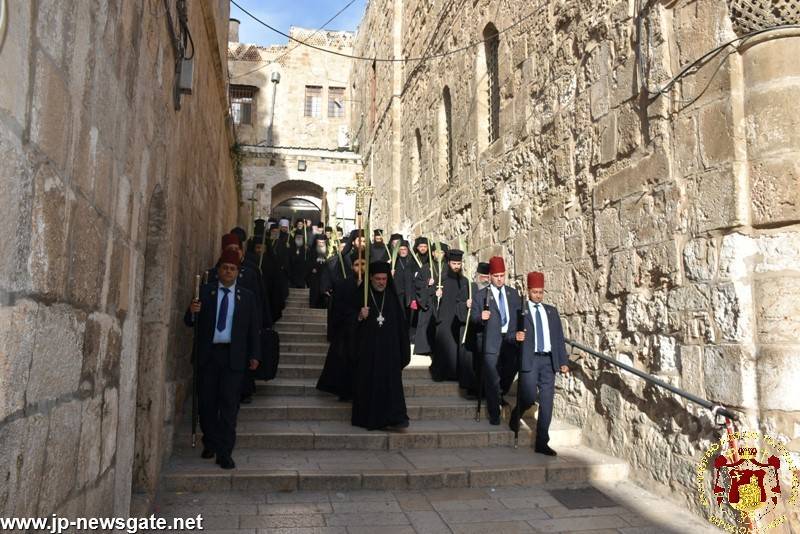 CELEBRATION OF PALM SUNDAY AT THE PATRIARCHATE (2017)

On Sunday 27th March/9th  April 2017, the feast of Palm Sunday was celebrated by the Patriarchate at the Most Holy Church of the Resurrection.

On this Sunday, the Church commemorates the event of the Lord’s triumphant entrance in Jerusalem, a little while before His passion, when the children of the Jews welcomed Him crying aloud “Hossana to the Son of David” putting their garments and palm branches on the street for Him to pass.

The memory of this event was celebrated:

On Saturday evening, at 13:45 the 9th Hour was read at the Monastic Church of Sts. Constantine and Helen. The descend to the Most Holy Church of the Resurrection followed. Upon arrival, there was the welcoming and the veneration at the Holy Deposition and the Holy Sepulchre.

Then Vespers began in the Catholicon, led by His Beatitude our Father and Patriarch of Jerusalem Theophilos, who gave the blessing, while the deacons performed the incense procedure around the Shrines and bells tolling the Archbishops venerated the Horrendous Golgotha.

Consequently Vespers continued with the Great Entrance and the blessing of bread.

On Sunday morning at 8:00 am, the Patriarchal entourage started the descend to the Most Holy Church of the Resurrection. Upon arrival, the entrance in the Catholicon was via Golgotha.

After the prayers to receive the blessing, the Episcopal osculation and the putting on of the liturgical vestments, the Divine Liturgy began in the Catholicon, led by H.H.B. our Father and Patriarch of Jerusalem Theophilos, with concelebrants a multitude of Archbishops and Priests, Hagiotaphite Hieromonks, among whom first in order was Elder Kamarasis Archimandrite Nectarios, and Archdeacon Marc and other deacons, at the singing of the Choir Leader Archimandrite Aristovoulos on the right and Mr. George Alvanos on the left, in the contrite participation of a large crowd of noble pilgrims from many Orthodox Churches.

The Divine Liturgy was followed by a procession three times around the Holy Edicule and then around the Shrines, while everybody was holding palm branches singing the festal apolytikion on resurrection.

At the end of the procession and the reading of the gospel narrative, the Patriarchal entourage returned to the Patriarchate. Many pilgrims followed them there and received the blessing by His Beatitude.