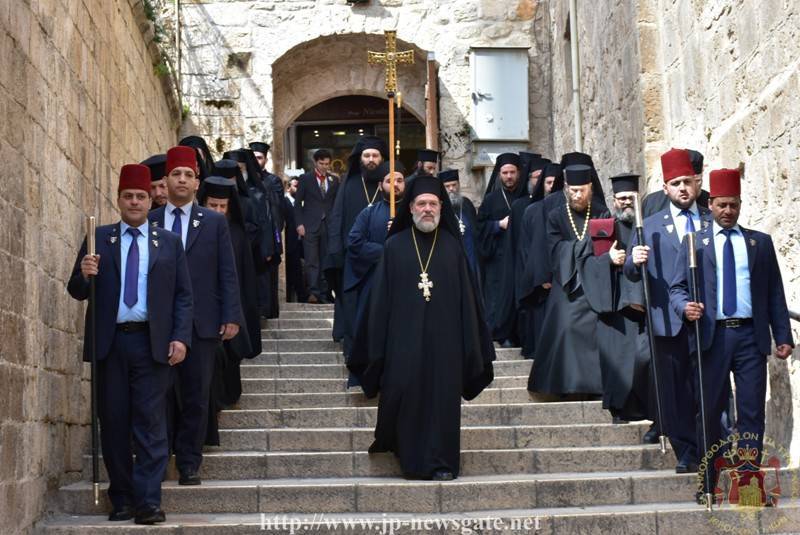 DOXOLOGY ON THE NATIONAL CELEBRATION OF 25TH MARCH

At 10:30 am on Monday 14th/27th March 2017, a Doxology was celebrated at the Catholicon of the Most Holy Church of the Resurrection, as a thanksgiving to our God, who fortified our nation in order to be liberated from the four hundred years of Turkish slavery; there was also a Deisis to God for the repose of the souls of our brothers and fathers who fought for their faith and country and died gloriously.

The Doxology was led by H.H.B. our Father and Patriarch of Jerusalem Theophilos and co-officiates were Hagiotaphite Archbishops and Hieromonks, at the presence of the Consul General of Greece in Jerusalem Mr. Christos Sophianopoulos with the participation in prayer of members of the Greek Community and the Greek Orthodox congregation.

After the Doxology the ascend to the Patriarchate followed, where His Beatitude gave the following address:

Today’s anniversary of 25th March 1821 is a landmark not only to the glorious and long history of Hellenism and Romiosyni but also to the history of humanity. And this is so because the Christian nation of the Greeks, inspired by the eternal principles of the Gospel of the Crucified and Resurrected our God and Saviour Jesus Christ, was not in the least quailed by the sufferings it endured by the Ottoman slavery and tyranny. On the contrary, it remained faithful in the hope of resurrection; the resurrection which is inextricably linked with freedom, which was granted as a gift by the creative power of God to His deified creature, the human being, as St. Paul preaches; “For brethren, ye have been called unto liberty” (Gal. 5:13).

To this “calling to liberty” were highlighted not only the holy martyrs of Church, but also the fighters of the 1821 revolution. This is moreover witnessed by the famous watchword of the revolution; “ For the holy faith of Christ and the freedom of the country”.

Genuine and candid ministers of the fight for the faith and the country were distinguished among others, the great leaders and heroes of 1821, the Metropolitan Palaion Patron Germanos, Theodoros Kolokotronis, Makrygiannis as well as members of the Hagiotaphite Brotherhood.

We make reference to the sacrificial to the blood contribution to the fight for faith and freedom of these great men, because our contemporary era is challenged by the ill and libertine spirit of globalization, that is opposed to the sacred command of the first martyr of freedom Rigas Feraios, which is directed especially to the young people; “Do not put you hope in foreigners and adulterate sons for Greece to be saved…”

The heroic fight of the Greek Revolution for the faith and the country in 1821 propounds the moral and indelible values which distinguish the uniqueness of the human being and the purpose for his existence. And this is so because a specific characteristic of man is the spirit that lives in him (2 Tim. 1:14), that is, his soul. “What shall a man give in exchange for his soul?” (Mat. 16:26) says the Lord.

Our Hagiotaphite Brotherhood, sensing its duty, partakes with its whole mind to this festal memorial for our noble nation’s rebirth from its ashes,  and thus came to the Most Holy Church of the Resurrection in full participation, where they offered a thanksgiving Doxology to our Crucified and Resurrected Saviour and Lord Jesus Christ, for the divine benefaction towards our nation. They also prayed fervently for the eternal repose in the land of the living for the souls of those who heroically fought for their faith and country and gloriously suffered a martyr’s death in the sacred fight for the noble nation of the Roman Orthodox people.

Through this celebration today, our Holy Church of Jerusalem, boasting in the Lord for its contribution as well as the participation of its faithful children, clergy and laity for this fight for freedom from the conqueror’s slavery, dutifully venerates their sacred memory and gratefully honours the victorious triumph of the 1821 revolution of the nation.

For all these, allow Us to raise Our glass and exclaim in thanksgiving;

Vive the noble and royal nation of the Romans!

Consequently the Consul General of Greece gave the following address:

“Your Beatitude, Most Reverend Fathers, Ladies and Gentlemen,

We celebrate today the Revolution of our Nation in 1821. With a feeling of national pride we remember the most glorious page of our contemporary history and honour those who with their grandiose rebellion, which began on 25th March 1821, led the fight for all, and managed to throw off the Ottoman yoke through a long and unequal confrontation, full of sacrifices and indescribable sufferings, and to put an end to the four dark centuries of foreign sovereignty and secure the outmost gift of freedom for the generations that followed.

With today’s celebration we ought to remember those elements which made the success of the Greek Revolution possible, which always remain contemporary, and especially when our Country faces great challenges and is surrounded by old and new dangers; the importance of faith in the righteous fight which bears boldness and determination, enough to overcome the greatest obstacles; of fortitude of soul which ensures endurance and physical strength that are necessary provisions for every long and arduous effort, and of course, of the national togetherness and unity of all the national powers in the common effort.

We ought not to forget that the national revolution in 1821 was made possible because Hellenism managed to keep integral its identity, national consciousness, values, and the desire for freedom during the long and tenebrous years of the Turkish occupation. To all these, the most significant role was of course that of the Church, which became depositary of our values, preserving the language, the Christian Faith and the hope of the nation’s Resurrection. Thanks to the Church, the Roman’s expectation to be liberated never abandoned them.

Moreover, before the time of the Revolution drew near, clergy men, such as Saint Cosmas Aitolos, worked tirelessly to awaken the people’s consciousness with the educational message of the nation’s revolution, and quite often, paid the price with their lives. When the time of the Revolution came, the Greeks fought for their country as much as they did for their Faith. A multitude of clergy men participated in the battlefields and shed their blood.

The role of the Expatriate Greeks was also important for both the preparation and the positive outcome of the Revolution. The members of the Society of Friends (Philiki Etairia) originating from big cities of Europe, had a significant participation in the initial planning, organization and material/financial support of the Revolution, while highly educated members of the expatriates conveyed the ideas of Enlightenment and demonstrated their relevance to Hellenism, thus giving a contemporary ideological substance to the Fight, inspiring the Fighters and giving expression to their patriotic spirit; at the same time, they contributed to the projection of the Revolution towards the international common opinion of the time and the promotion of a favourable attitude towards Greece.

March 25th, 1821, remains for all of us the foundation of our national hypostasis and the capstone of the Nation’s contemporary history. The heroism, self-denial and determination of the Revolution Fighters to have a free, law-abiding and democratic Country, especially now amidst the most adverse international conjuncture, inspire us, but simultaneously bind us to live up to their standards, and just as they did, we should also rise to the occasion and work together in unity for the overcoming of the obstacles, no matter how insurmountable they appear to be. Greeks worldwide and especially those of the Holy Land, headed by the venerable Church of Zion, are a precious source of inspiration and strength in this effort.

Today’s celebration, the anniversary of the national regeneration should be a source of hope and expectation that our own efforts to overcome a long lasting financial crisis will succeed. We ought at the same time to consider our duty and responsibility towards the Nation, recalling the words of General Makrygiannis “we are in “we” and not in “I”.

The ceremony ended by honouring His Beatitude.