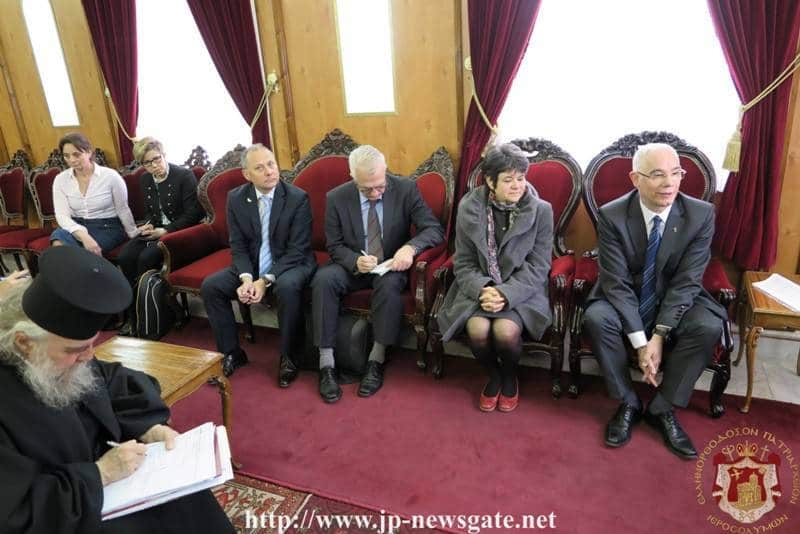 THE MINISTER OF HUMAN CAPACITIES OF HUNGARY VISITS THE PATRIARCHATE

On Saturday morning, 5th/18th March 2017, the Minister of Human Capacities of Hungary, His Excellency Mr. Zoltán Balog visited the Patriarchate, escorted by his wife, the Ambassadors of Hungary in Israel and the Palestinian State respectively, and by a small team of his associates.

Mr. Balog expressed his joy on his visit and mentioned that in his country there are Churches that belong to the Ecumenical Patriarchate, the Patriarchate of Moscow and Romania and other Churches.

His Beatitude also expressed his joy on this visit and for the fact of the good cooperation between our Patriarchate and the country of Hungary, which has demonstrated a special interest for the work of the Patriarchate in the Holy Land in many ways and by the donation Hungary has offered for the restoration of the Basilica of Bethlehem and the Holy Edicule of the Holy Sepulchre.

In recognition of this support on behalf of the country of Hungary to the Patriarchate, His Beatitude awarded Mr. Zoltán Balog with the honourary distinction of the Grand Commander of the Order of the Knights of the Holy Sepulchre. Touched, the awarded Minister thanked warmly His Beatitude and committed himself in the continuation of his country’s interest for the persecuted Christians of the Middle East. Having accepted His Beatitude’s presents, the Minister departed to venerate the Holy Sepulchre.