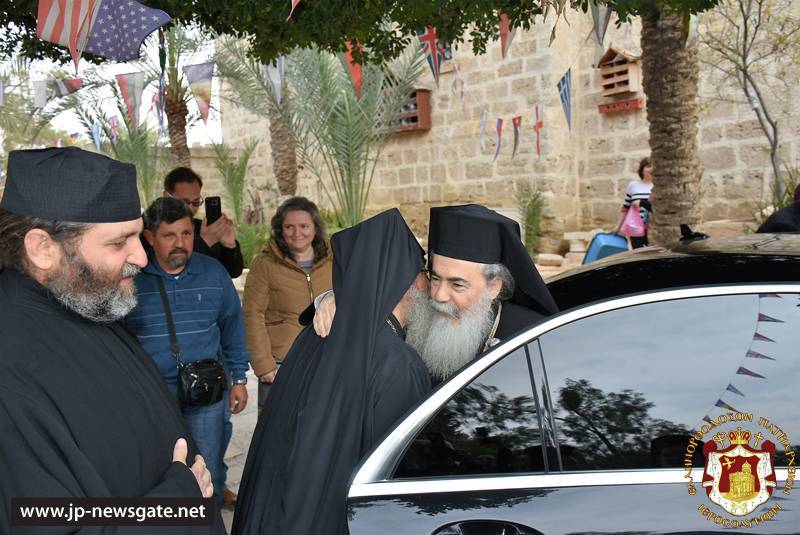 THE FEAST OF SAINT GERASIMOS AT THE PATRIARCHATE

On Friday 4th/17th March, 2017, the feast of St. Gerasimos of the Jordan was observed by the Patriarchate, at the Holy Monastery which is named after him, located in the desert of Jordan, near the banks of the river in the Dead Sea.

St. Gerasimos founded this Monastery coming to the Holy Land from Lycia of Asia Minor, guiding thousands of monks and laity in the Orthodox life, which confesses Jesus Christ in one hypostasis and two natures.

To this massive crowd of faithful His Beatitude preached the Divine Word as follows:

“And so it is written, The first man Adam was made a living soul; the last Adam was made a quickening spirit. Howbeit that was not first which is spiritual, but that which is natural; and afterward that which is spiritual. The first man is of the earth, earthy; the second man is the Lord from heaven. As is the earthy, such are they also that are earthy: and as is the heavenly, such are they also that are heavenly. And as we have borne the image of the earthy, we shall also bear the image of the heavenly.” (1Cor. 15:45-49), the Great St. Paul preaches.

The desert of Jordan rejoices today on the festal memory of its holy child, Gerasimos the God-bearer and spiritual Father of all who respectfully honour him. Having gone through the ladder of divine virtues, he was deemed worthy of the contemplation of God, by Whom he became wondrous.

Our Father among the Saints Gerasimos became indeed wondrous, because in this deserted land, where his Holy Monastery lies, he managed to renounce the image of his earthly man – the man of corruption and sin – by his ascetic striving, and he put on the image of the heavenly man, meaning the incarnate our Lord Jesus Christ.

With reference to the above, St. Paul says: “Know ye not, that so many of us as were baptized into Jesus Christ were baptized into his death? Therefore we are buried with him by baptism into death: that like as Christ was raised up from the dead by the glory of the Father, even so we also should walk in newness of life. For if we have been planted together in the likeness of his death, we shall be also in the likeness of his resurrection” (Romans 6:3-5).

St. Gerasimos urges us with the words of St. Paul to “walk in newness of life” (Rom. 6:4). This my beloved ones means that we too, as members of the Church, “have been buried with Christ through his baptism, which has made us partakers of his death, so that just like Christ was risen from the dead by the glorious power of the Father, likewise, we shall be risen in the new virtuous and holy life, and conform our behaviour, or should I rather say, our conduct of living, according to the demands of our Christian faith”. It is precisely to this new way of living, that is, in Christ, that our Father Gerasimos became a guide to many people, imitating St. John the Baptist and St. Paul. As the hymn writer says, St. Gerasimos shone forth like Lucifer in the darkness of life and guided people to the light of the state of Angels.

Indeed, the life and works of St. Gerasimos shine forth in today’s darkness of confusion and in the prevailing worldly disorder, like a bright star, emerging from the richness of the grace of the Holy Spirit. This very richness of the Holy Spirit is what our Holy Orthodox Church offers, especially at the present time of the Great Lent, when we are called to tame and bridle the spirit, or should I rather say, the passions of the flesh. As the hymn writer says; the King of all, reign over the passions and the lusts of the flesh and through fasting and toiling make us worthy to bless Thee unto the ages.

Through fasting, that is, abstinence, St. Gerasimos became heir to the Kingdom of God and to the fruits of the Holy Spirit. “But the fruit of the Spirit” St. Paul says, “is love, joy, peace, longsuffering, gentleness, goodness, faith, meekness, temperance: against such there is no law. And they that are Christ’s have crucified the flesh with the affections and lusts” (Gal. 5:22-24). Therefore, those who indeed belong to Christ, have mortified the earthly man together with his passions and desires. St. Peter teaches that by the power of Christ we have received exceeding great and precious promises, so that urged and strengthened by them we may become partakers of the divine nature. For this reason he admonishes in his 1st letter; be holy and partakers of the life of Christ, having become exempted from the corruption of the world, which is caused by the sinful desires. “That by these ye might be partakers of the divine nature, having escaped the corruption that is in the world through lust” (2 Peter 1:4).

Our Father among the Saints Gerasimos accomplished to be partaker of the divine nature, meaning the participation in the gifts and the enlightenment of the Holy Spirit, by his fasting and avoidance, or better say, exemption from evil habitudes as well as actions and thoughts.

In other words, my dear ones, our Father Gerasimos urges each one of us by his own example, to consider on the one hand the purpose of our Christian identity, and on the other hand, to be primarily concerned with the salvation of our souls. And this is so because the man’s soul carries within the image of God, and as St. Peter teaches, “the end of the faith (is) the salvation of your souls” (1 Peter 1:9).

As for us my dear brothers and sisters, let us entreat our Father among the Saints Gerasimos and the Mother of our God and Saviour Jesus Christ, the Most-Blessed Theotokos and Ever-Virgin Mary to surround us with her power in the time of abstinence as she is the given support of the faithful. And you, St. Gerasimos, being in the presence of Christ, beseech Him in favour of those who honour your memory. So that we may be found worthy to go through the period of Great Lent and be able to venerate and worship Christ’s Holy Resurrection. Amen.

After the Divine Liturgy there was a procession around the Holy Monastery with the participation of the congregation, led by the Scouts, at the presence of the Consul General of Greece in Jerusalem Mr. Christos Sophianopoulos.

Once the procession was completed, the renovator and preserver of the Holy Monastery, who has turned it into an Oasis and also offers a social work in it, offered a fasting meal to the Patriarchal Entourage and all visitors at the refectory.