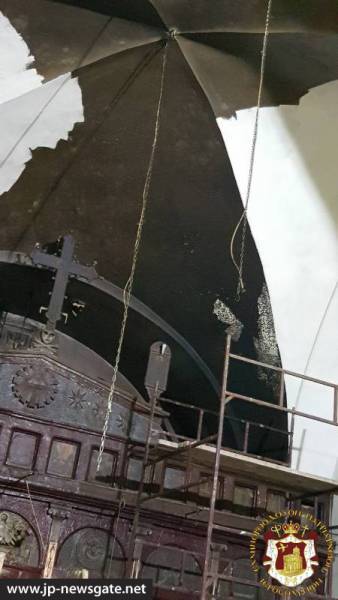 FIRE DUE TO ELECTRICITY FAILURE AT PATRIARCHATE CHURCH IN JIFNA

On Friday morning, 25th February/10th March 2017, a fire broke out at the H. Church of St. George in Jifna, due to an electrical failure. Jifna belongs to the Greek Orthodox Arab-speaking Community of the Patriarchate. The fire caused serious damage in the Holy Altar and the interior of the central part of the Church; as a consequence the adjacent to the Church reception hall will be used for the Church services until the damage is restored.

The following day, Saturday 26th February/11th March, 2017, His Beatitude visited the burnt Church for financial and moral support; His Beatitude was escorted by the Most Reverend Metropolitan Isychios of Kapitolias, the Most Reverend Archbishop Aristarchos of Constantina and Secretary-General, and the Dragouman Archimandrite Mattheos. The Supervisor of the Community Fr. George Awad and the vestry of the H. Church thanked  His Beatitude for their visit and support.