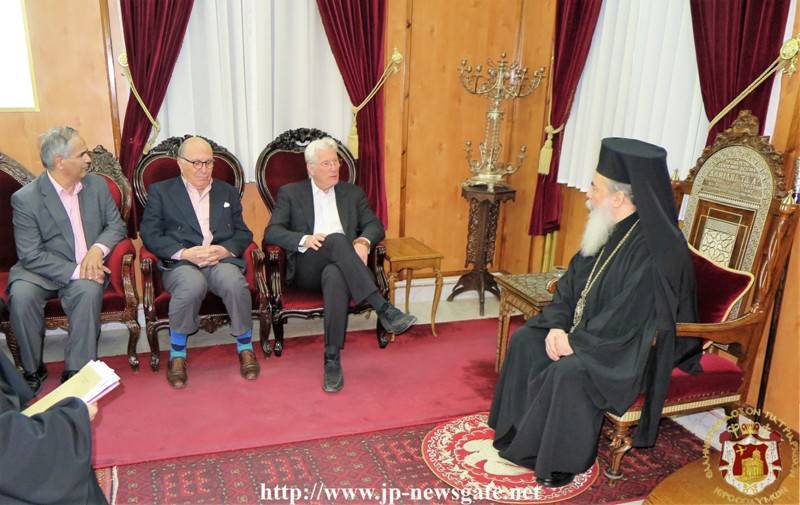 Mr. Richard Gere was received by H.H.B. our Father and Patriarch of Jerusalem Theophilos with Hagiotaphite Fathers, the Patriarchal Commissioner Most Reverend Metropolitan Isychios of Kapitolias, the Most Reverend Archbishop Aristarhos of Constantina Geronda Secretary-General, the Master of Ceremonies Archimandrite Bartholomew and Archdeacon Mark.

At this visit, His Beatitude conversed with Mr. Richard Gere on the stages of the Orthodox ascesis: repentance, purification, enlightenment and deification. Mr. Gere expressed Dalai Lama’s appreciation and respect to His Beatitude, and His Beatitude said that He had met Dalai Lama in the past.

His Beatitude also told Mr. Gere, that for the Orthodox Church, man is the “great wound” which is being healed by the Church through the sacraments experienced in it by our Lord Jesus Christ who has taken upon Himself all human nature with His incarnation.

His Beatitude also mentioned Mr. John Tleel’s book “I am Jerusalem”, in which the writer proves that the Patriarch of Jerusalem is the successor of the Patriarchs of the Old Testament, Abraham, Isaac, Jacob, etc. Moreover, His Beatitude said that the Church of the Resurrection is the holiest shrine of Christianity where followers of all religions come, indiscriminately and unceasingly.

As a souvenir of this visit, His Beatitude offered Mr. Gere an icon of Theotokos, an icon of the Holy Sepulchre and a medal of the 2000 years of Christianity, and the emblem “Guards of the Tomb” (Φ.Τ) of the Patriarchate. Mr. Gere thanked warmly His Beatitude for receiving him and for His blessings and gifts.