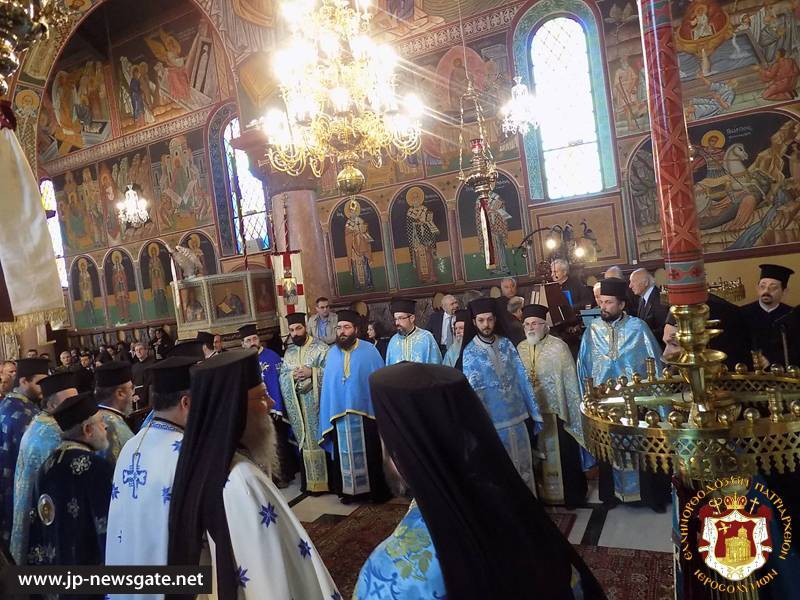 H.B. THE PATRIARCH OF JERUSALEM LEADS THE DOXOLOGY ON THE 70TH INCORPORATION ANNIVERSARY OF THE DODECANESE

On Tuesday morning, 22nd February/7th March 2017, a Doxology was celebrated at the Cathedral of the Annunciation at the Holy Metropolis of Rhodes, officiated by His Beatitude our Father and Patriarch of Jerusalem Theophilos, courtesy of the Most Reverend Metropolitan Cyril of Rhodes; this was on the occasion of the 70th incorporation anniversary of Rhodes and the Dodecanese within Greece.

At the Doxology the Mayor of Rhodes gave the festive speech, emphasizing the ancient Greek roots of Rhodes and all of the Dodecanese, and the suffering they endured by the conquerors: Persians, Turkish, Venetians, Italians, as well as the significance of this incorporation for the Greek identity of its inhabitants.

The Doxology was followed by a Memorial Service for the repose of the souls of those who fought and died for their faith and country, the people of Dodecanese. After the Memorial Service, His Beatitude and His Entourage, the delegates of the other Communities, Franciscans, Armenians and the Latin Patriarchate, and the people of Rhodes attended a touching parade with the school students of Rhodes, Associations from various parts of Greece such as Cretans, Cypriots, Peloponnesians and others, Military Squads, Police forces, Fire Brigade and many other teams, and the demonstration of a supersonic aircraft.

All these created deep feelings of national pride and a disposition for praying to God for the protection of our country from enemy attacks.

At the end of the parade, at the Town Hall, the Mayor offered a copy of the key of the city to His Beatitude, the delegates of the other two Major Communities, the Mayor of Beit Sahour Mr. Hanna Al Haik, who also signed with the Mayor of Rhodes a fraternization document between the cities of Rhodes and Beit Sahour, Mr. Athanasios Abu-Aeta, the Ambassador of the State of Palestine in Greece Mr. Marouin Toubasi and other honoured guests.

In the evening of the same day, the Most Reverend Metropolitan Cyril of Rhodes hosted a dinner in honour of His Beatitude, His Entourage and other guests.

THE ORTHODOX PATRIARCHATE OF JERUSALEM PAYS MORE THAN $600,000 TO PROTECT JAFFA GATE PROPERTIES

Jerusalem 1-25-2021 Upon the instructions of His Beatitude Theophilos III, the Patriarch...