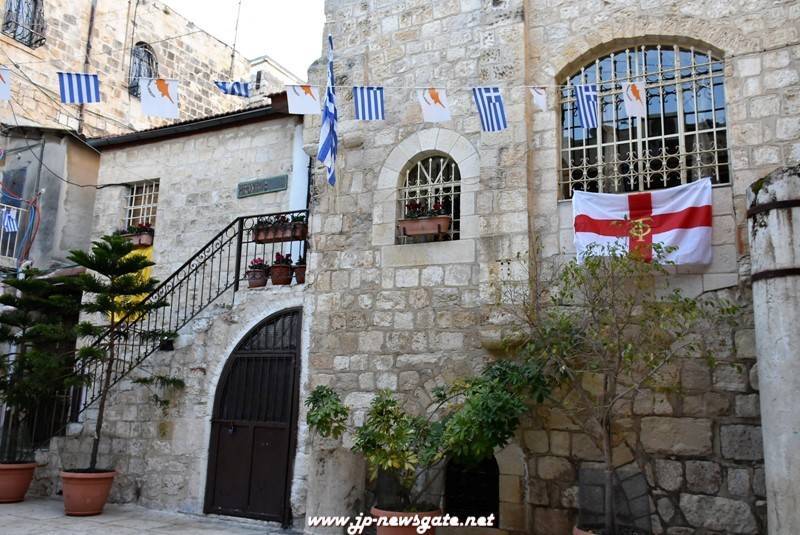 THE FEAST OF ST. CHARALAMBOS AT THE PATRIARCHATE

On Thursday 10th/23rd February 2017, the feast of the Hieromartyr St. Charalambos was celebrated by the Patriarchate at his Holy Monastery, located on the north side of the Church of the Resurrection, by the end of Via Dolorosa.

According to the Synaxarion of the Church, St. Charalambos was a Priest to the Christians in Magnesia, capital of Thessaly, and became a martyr through torture and beheading at the time of the Emperor Septimius Severus in 198 A.D.

For this feast, there was Vespers in the evening and the Divine Liturgy in the morning at the homonymous Holy Monastery of the Old City of Jerusalem, officiated by the Most Reverend Archbishop Theophanis of Gerassa, and co-officiating, Archimandrite Charalambos, Presbyter Fr. Farah and Archdeacon Mark; singing was the choir leader of the H. Church of Saints Constantine and Helen Archimandrite Eusevios, at the presence of a big congregation of the Greek Orthodox nuns of Jerusalem, and pilgrims from Greece, Russia and Romania.

During the Divine Liturgy, H.H.B. our Father and Patriarch of Jerusalem Theophilos with Hagiotaphite Fathers came to venerate. After the Divine Liturgy the Hegoumen Archimandrite Kallistos hosted a reception for the Episcopal Entourage and the congregation at the hegoumeneion.
From Secretariat-General