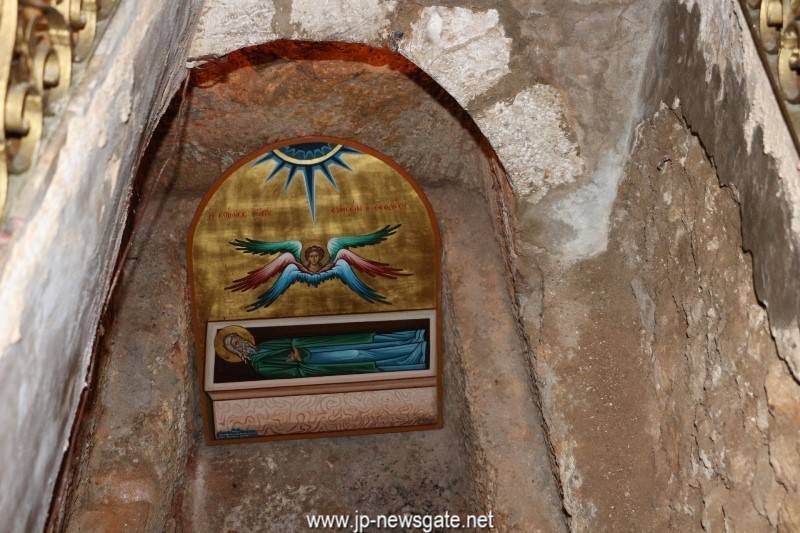 THE FEAST OF ST. SIMEON THE RECEIVER AT THE PATRIARCHATE

On Thursday 3rd/16th February 2017, the memory of St. Symeon the God-receiver was celebrated by the Patriarchate, at the Monastery dedicated to him where his tomb is preserved, on the west side of New Jerusalem.

This feast is observed one day after the Dominical Feast of the Meeting of the Lord, and the Church commemorates the fact that St. Symeon received the Lord when He was presented at the Temple of Solomon, brought by His parents at his fortieth day of age with a pair of turtle doves and two doves. This was done according to the Law of Moses, in order for the infant to be sanctified, but it turned out that the One who came to be sanctified, was actually the One who offered sanctification to Simeon and to the Temple (Luke 2:29-33).

This event was celebrated on the above mentioned Holy Monastery with Vespers in the evening which was led by Archimandrite Ananias, and the Divine Liturgy in the morning, officiated by H.H.B. our Father and Patriarch of Jerusalem Theophilos, with concelebrants the Most Reverend Metropolitan Kyriakos of Nazareth, the Geronda Secretary-General Most Reverend Archbishop Aristarchos of Constantina, the Most Reverend Archbishop Methodios of Tabor, and the Most Reverend Metropolitan Joachim of Helenoupolis, Hagiotaphite Hieromonks, among whom the Draguman Archimandrite Matthew, the Hegoumen of St. George in Al Khader Archimandrite Ananias, the Hegoumen of Fhes in Jordan Archimandrite Ieronymos, the Hegoumen of the Holy Monastery of the Shepherds-Beit Sahour Archimandrite Ignatios, the Supervisor of the Russian Envoy in Jerusalem (Missia) Archimandrite Alexander, other Priests of the Russian Orthodox Church, the Priest of the Shrine of the Annunciation in Nazareth Fr. Simeon, Archdeacon Mark, and Deacon Anastasios, at the singing of the left choir singer of the Most Holy Church of the Resurrection Mr. George Alvanos, and the participation of the noble congregation, members of the Greek Community, Arab-speaking Orthodox and pilgrims from Greece, Russia, and Romania.

To the noble congregation His Beatitude gave the following Sermon:

“Let the gate of heaven be opened today, for the unoriginated Word of the Father has made a beginning in time without forsaking His divinity. As a Babe forty days old, of His own will He is brought by the Virgin His Mother, as an offering in the Temple of the Law. The Elder receives Him in his arms, crying as a servant to his Master: “Let me depart, or mine eyes have seen Thy salvation”. Glory to thee, O Lord, for Thou hast come into the world to save mankind”, the hymn writer of the Church proclaims.

Today the Holy, for us Orthodox, Church honours and felicitates the incomprehensible to men sacrament of God the Logos’ condescension and his kenosis to the point of Incarnation, in the face of the Righteous Saint Simeon the God-receiver, whose holy tomb is preserved in this Church and Monastery which are named after him, where we Orthodox are gathered to celebrate in thanksgiving the event of Divine philanthropy.

This fact is the entrance of the child Jesus and his presentation by his parents in the Temple of Solomon, together with his receiving by Righteous Simeon and Prophetess Anna, according to Luke the Evangelist: “ And, behold, there was a man in Jerusalem, whose name was Simeon… And he came by the Spirit into the temple: and when the parents brought in the child Jesus, to do for him after the custom of the law, then took him up in his arms, and blessed God, and said, Lord, now lettest thou thy servant depart in peace, according to thy word: For mine eyes have seen thy salvation, which thou hast prepared before the face of all people; A light to lighten the Gentiles, and the glory of thy people Israel” (Luke 2: 22-39).

Our Lord Jesus Christ – as the hymn writer says – “having come forth” from “the undefiled Mother”, meaning the Ever-Virgin Theotokos Mary, was presented “in the Temple of his glory as an infant in arms”, held by the Elder and Righteous Simeon. Saint John of Damascus says, “Being God indeed, he becomes man…and is held as an infant in human arms”. “This Christ”, St. Cyril of Jerusalem says, “is the one who created us according to the likeness of God, and now he has become human according to our likeness”.

This Incarnate God the Logos is the “Salvation” of “God the Father” for the salvation of the people, meaning the same Christ “Whom the eyes of Elder Simeon have seen”, as the hymn writer of the Church exclaims: “The Elder, having seen with his eyes the salvation that was to come to the peoples, cried aloud unto Thee: O Christ that comest from God, Thou art my God”, and in other words, Lord, when the Elder Simeon saw with his own eyes the Saviour who came for all nations, he called unto you with a loud voice: Christ, You are my God who has been begotten by God the Father. “And all flesh shall see the salvation of God”, Prophet Isaiah says (Luke 3:6, Isaiah 40:5).

In other words, my dear ones, “the salvation of God”, means that Christ is being offered to all people, and especially to those who have the desire and the good will to know and receive Him in their spiritual arms. “I am come a light into the world, that whosoever believeth on me should not abide in darkness. And if any man hear my words, and believe not, I judge him not: for I came not to judge the world, but to save the world” (John 12:46-47).

“The salvation of God”, the incarnate God the Logos, Christ, is the living God, whom the Elder Simeon saw with his natural eyes as a perfect man, while with his spiritual eyes, he saw Him as true and uncreated light, meaning his divinity, as the hymn writer Monk Cosmas wrote: as the Elder bend over to touch him, he exclaimed to the Ever-Virgin Mary, Thou Most Pure are holding fire, and I marvel how to hold God in my arms, Who reigns over uncreated light and peace.

The God-inspired Prophetess Anna also became partaker and communicant of the experience and witness of St. Simeon; “she was a widow of about fourscore and four years, which departed not from the temple, but served God with fastings and prayers night and day” (Luke 2:37). And having seen the child, she thanked and glorified God, “she coming in that instant gave thanks likewise unto the Lord, and spake of him to all them that looked for redemption in Jerusalem” (Luke 2:38).

This “salvation” that “hath visited and redeemed his people” (Luke 1:68), with his sacred blood, our Lord Jesus Christ, is noted by St. Paul in his letter to the Hebrews saying: “But Christ being come an high priest of good things to come…neither by the blood of goats and calves, but by his own blood he entered in once into the holy place, having obtained eternal redemption for us” (Hebrews 9:10-12). “Christ entered into the holy place”, meaning into “the heavenly Holy of Holies”, the Fathers of the Church say, expounding on St. Paul’s words: “For if the blood of bulls and of goats, and the ashes of an heifer sprinkling the unclean, sanctifieth to the purifying of the flesh: How much more shall the blood of Christ, who through the eternal Spirit offered himself without spot to God, purge your conscience from dead works to serve the living God” (Hebrews 9:13-14).

St. Simeon also worshiped this “living God”. Prophetess Anna was speaking of this “living God”. This living God, the God-Man Christ, the one who “is set for the fall and rising of many” (Luke 2:34), calls us to meet him not according to the law, but in the Holy Spirit.

Let us all my brothers today and forever exclaim together with our Father among the Saints Cyril of Jerusalem the words of the feast. Let us dance with the angels. Let us be enlightened with the shepherds. Let us worship with the Wise Men. Let us celebrate with Bethlehem. Let us rejoice magnifying with the Ever-Virgin Mary. Let us offer with Joseph two turtle doves, the soul and the body. Let us embrace with Simeon, and confess with the Prophetess Anna, that we may receive in us the eternal gifts, by the grace and the mercy and the philanthropy of our Lord and God and Saviour Jesus Christ, to whom glory and power together with the Father and the Holy Spirit unto the ages of ages. Amen.”

After the Divine Liturgy the renovator of the Monastery for the last thirty years, Elder and at present recovering from illness, Hegoumen Archimandrite Theodoritos, received the Patriarchal Entourage and the congregation at the hegoumeneion.