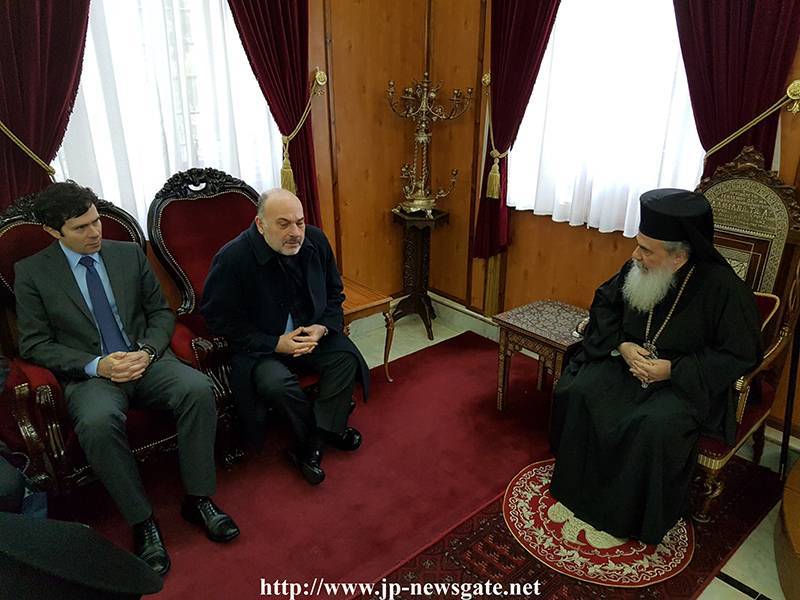 On Thursday afternoon, 3rd/16th February 2017, on the day of the feast of St. Simeon the Reveiver, after the Festal Divine Liturgy at the Holy Monastery of St. Simeon in Kata Monas, the ambassador Mr. Petros Mavroedis, Manager of the Political Affairs Department of the Ministry of Foreign Affairs of Greece, visited the Patriarchate, escorted by the Ambassador Constantine Kakiousis, the Consul of the Greek Embassy in Tel Aviv Mrs. Anna Farou, and the Consul General of Greece in Jerusalem Mr. Christos Sophianopoulos.

Mr Mavroedis and his escort were received by His Beatitude our Father and Patriarch of Jerusalem Theophilos and Hagiotaphite Fathers.

In the agenda of the meeting there was an interesting conversation on the nowadays constantly developing religious tourism, contributing in the establishment of peace in the Middle East, despite the difficulties due to the instability of the political affairs, the incidents of violence and the mines, which have not been removed in the Jordan River area, where thousands of pilgrims are attracted from the East Bank of Jordan, the West Bank of Israel and the Palestinian State.

With the many attracting Shrines, the Patriarchate is capable of helping the efforts of Greece to promote religious tourism.

On the occasion of this visit, Mr. Maroedis offered His Beatitude the coat of arms of Greece, while His Beatitude offered Mr. Mavroedis an icon of the Holy Sepulchre and the Book of the History of the Church of Jerusalem by memorable Chrysostom Papadopoulos.

Mr. Mavroedis thanked His Beatitude for His time and departed asking the blessing of the Holy Sepulchre in exercising his mission.