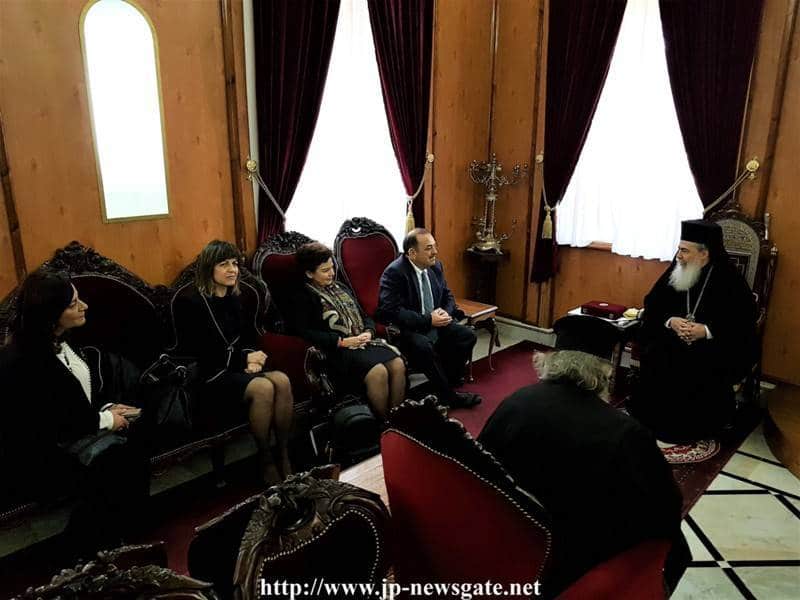 THE MAYOR OF RHODES VISITS THE PATRIARCHATE

On Monday 24th January/6th February 2017, the Mayor of Rhodes Mr. Fotis Chatzidiakos visited the Patriarchate, escorted by the coordinator of the restoration project of the Holy Edicule of the H. Sepuchre, the Professor of the National Technical University of Athens Mrs. Antonia Moropoulou, Mrs. Anastasia Chatzilazarou and Maria Siviou.

The Mayor and his escorts were received by H.H.B. our Father and Patriarch of Jerusalem Theophilos.

In the agenda of the meeting, His Beatitude referred to the Mayor’s hospitality which He enjoyed in His former visit to Rhodes, as well as to the importance of the island of Rhodes as a stopover for the pilgrims to the Holy Land, and a meeting station of cultures, while the Mayor commented on the continuing restoration project of the Holy Edicule, after his visit with Mrs. Moropoulou there earlier that day.

For his contribution to this pious and remarkable project, His Beatitude honoured the Mayor with the honorary distinction of the Grand Commander of the Order of the Nights of the Holy Sepulchre, so that by its Grace, he may continue his work of sustaining our Byzantine tradition in the island of Rhodes, and his efforts for the completion of the restoration project of the Holy Edicule of the Holy Sepulchre.

At the award of this honorary distinction His Beatitude addressed the Mayor as follows:

“Most Honorable Mayor of the Historic and multicultural island of Rhodes, Mr. Fotis Chatzidiakos,

The stronghold of the Hagiotaphite Brotherhood welcomes you and your escorts in the lands where once stood the incarnate light of truth, righteousness and peace, meaning God the Logos and our Saviour Jesus Christ.

The Holy City of Jerusalem, which is inextricably connected with the Sacred History, is the reference point of the whole world. The venerable Patriarchate of Jerusalem, known as Rum Orthodox, was rendered by the Divine Providence the guardian and minister, and moreover the deacon of the Holy Shrines, which are the undeniable witnesses of our faith in the crucified and resurrected Christ.

We therefore say this because the pious nation of the Romans, which includes the Christian nation of the Greeks, was highlighted as the natural and spiritual guardian of the God-given heritage of these salvific attestations.

Your pilgrimage Mr. Mayor is of particular importance, not only for the people of Rhodes but also for the people of the Holy Land, and especially for the Christians who inhabit the region of the tested Middle East. This means that your visit is a blessing for both of our peoples.

Your hospitality and reception during Our stay in Rhodes Mr. Mayor remains vivid in our hearts.

We wonder, what can we offer you in return for your offerings? The blessing of the Sacred Cross and the Grace of the Holy and Life-giving Sepulchre of our Saviour Jesus Christ.

Mr. Mayor, the Holy Church of Jerusalem with the Hagiotaphite Brotherhood deemed appropriate to honour you with the Cross of the Order of the Nights of the Holy Sepulchre, and this is in recognition of your contribution and concern for the Holy Sepulchre, as well as your support for the harmonious co-existence of the Religious Communities.

It is moreover noted with particular honour, that the leader of the restoration project of the Holy Edicule of the Holy Sepulchre, Professor of the National Technical University of Athens, Mrs. Antonia Moropoulou, was born and raised in the island of Rhodes.

We wish you a blessed pilgrimage and success in your mission.”

Moved by the event, the Mayor thanked His Beatitude and promised to continue his support to the Patriarchate of Jerusalem, and moreover noted that this honorary distinction has a reflection upon all people of Rhodes.

Following this ceremony, His Beatitude offered a meal to the Mayor. After the meal, the Mayor visited the Basilica of the Nativity in Bethlehem and the Holy Monastery of St. Savvas the Sanctified, accompanied by Geronda Secretary-General Most Reverend Archbishop Aristarchos of Constantina. In the evening His Beatitude hosted a dinner in honour of the Mayor, who would participate in a tourist exhibition in Tel Aviv the following day.