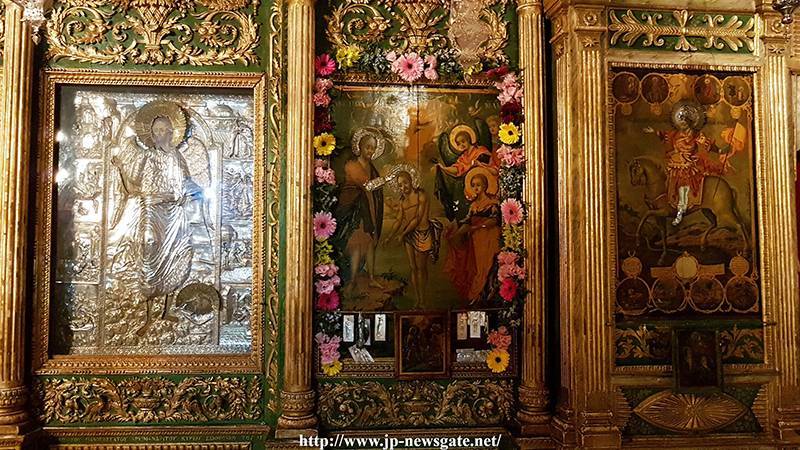 On the following day of Theophany, Friday 7th/20th January 2017, the feast of St. John the Baptist was celebrated by the Patriarchate at the Holy Monastery in his honour located south of the Church of the Resurrection and St. James’ guesthouse downlinked by the Israeli settlers of Ateret Kohanim.

When we say Synaxis of St. John the Baptist we mean the gathering of us Christians of the following day of Theophany in order to honour him as minister of the Sacrament of Baptism of our Lord Jesus Christ, when pointing at Him he exclaimed “Behold the Lamb of God, who hath taken upon himself the sins of the world” and baptized him.

On the above mentioned Holy Monastery Vespers was held in the evening and the Divine Liturgy was celebrated in the morning, led by the Most Reverend Archbishop Theophanis of Gerassa  with concelebrants Hagiotaphite Hieromonks, the Archimandrites Haralambos, Meletios and Porphyrios,  the Hierodeacons Markos and Anastasios; singing were the students of the Patriarchal School with Mr. Alvanos with the praying in nobleness and  contrition towards St. John the Baptist, monks, nuns and pilgrims.

During the Divine Liturgy His Beatitude with Hagiotaphite Fathers came to venerate. Before the Koinonikon , the Most Reverend Archbishop Theophanis gave a Sermon on the “Greatest man born of woman”, the celebrated St. John the Baptist.

His Beatitude’s Entourage, the officiating Archbishop and the congregation were offered a reception by the renovator of the Monastery Hegoumen Archimandrite Bartholomew.