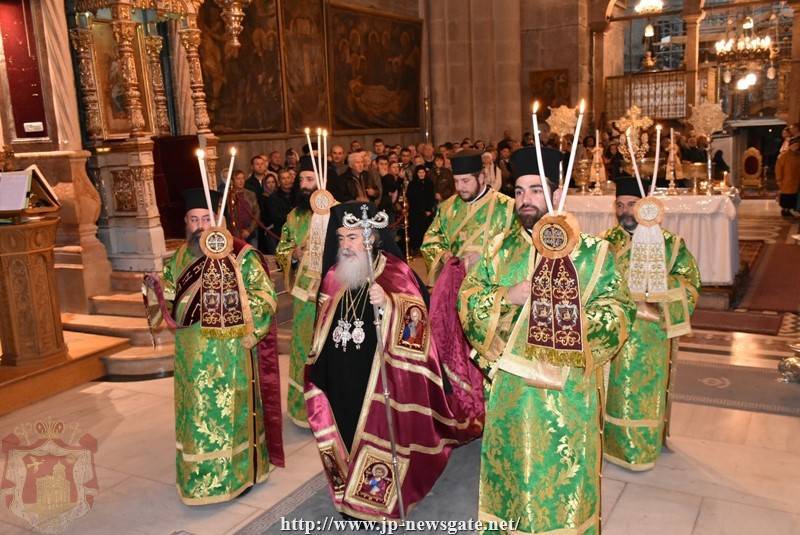 THE THEOPHANY FEAST AT THE PATRIARCHATE (2017)

On Thursday 6th/19th January 2017, the Feast of Theophany or Epiphany was celebrated by the Patriarchate, meaning the memory of the event of the baptism of our Lord Jesus Christ by St. John the Baptist at the River Jordan, when the mankind witnessed the Trinitarian Epiphany, Jesus Christ being baptized, the Holy Spirit in the form of a dove “anointing Him with Divine ointment” and the Father witnessing from heaven “He is my beloved Son, in whom I am well pleased” (Matthew 3:17).

In the morning, the feast of Theophany was celebrated at the Most Holy Church of the Resurrection. At, the end of Matins at the Catholicon of the Church, His Beatitude officiated the Service of the Great Blessing of Waters, under the singing of the Leading Choir Singer of the Church of the Resurrection Archimandrite Aristovoulos on the right, and Mr. Alvanos singing on the left choir, “The voice of the Lord is upon the waters…”, “Today the nature of the waters is sanctified…” and “When Thou was baptized in the Jordan…”, bells joyfully tolling and the fasting pilgrims receiving the Blessed Water.

At the end of the Divine Liturgy, the faithful who were prepared received the Holy Communion followed by the Blessed Water.

After the Dismissal, the ascent at the Patriarchate followed, where His Beatitude wished everybody the enlightenment of Christ our God baptized and made manifest, and the faithful who had filled the Hall received His blessing.