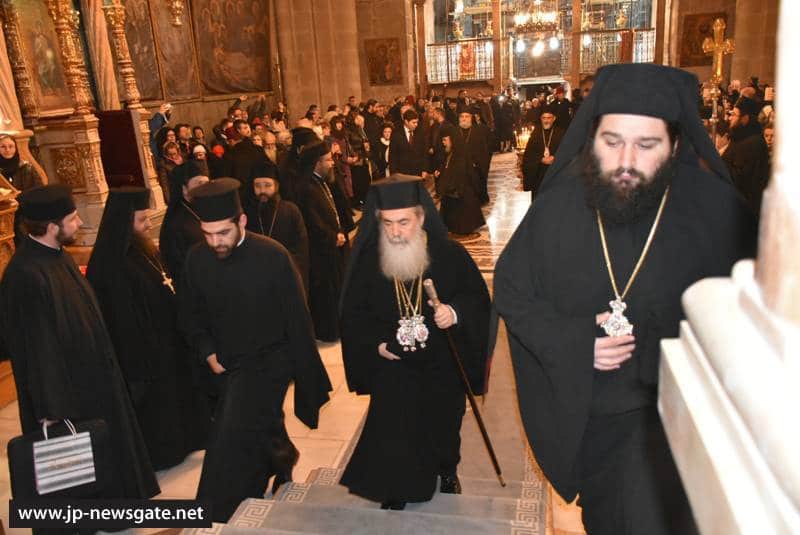 THE FEASTS OF THE CIRCUMCISION OF THE LORD AND THE MEMORY OF ST. BASIL AT THE PATRIARCHATE

At midnight on 1st /14th January 2017, the memory of the Circumcision in flesh of or Lord Jesus Christ and the memory of St. Basil the Great Archbishop of Caesarea in Cappadocia were celebrated by the Patriarchate.

Our Lord Jesus Christ, incarnate through the Virgin, gave us an example of obedience by deigning to receive the circumcision of his flesh on the eighth day after his birth, according to the Mosaic law (Luke 2:5) in order to intersect the Law, and having become intersected by the Law, introduce Grace to the world. St. Basil is a Church Father, who lived in the 4th century, he was an advocate of the 1st Ecumenical Synod of Nice and an outmost worker of philanthropy through his charity guest house “Vasiliada”.

For these feasts, His M.H.B. our Father and Patriarch of Jerusalem Theophilos came to the Catholicon of the Church of the Resurrection at midnight on the aforementioned day and after Matins, led the Divine Liturgy at the Holy Sepulchre, with concelebrants the Most Reverend Metropolitan Isychios of Kapitolias, the Most Reverend Archbishops Aristarchos of Constantina, Philoumenos of Pella, and the Most Reverend Metropolitan Joachim of Helenoupolis, Hagiotaphite Hieromonks among whom first was Archimandrite Nectarios, Archdeacon Markos and the Hierodeacons Eulogios and Anastasios. The leading choir singer of the Most Holy Church of the Resurrection Archimandrite Aristovoulos sang on the right, and the noble pilgrim Mr. Alvanos sang on the left, at the presence of the Consul-General of Greece in Jerusalem Mr. Christos Sophianopoulos, and Mrs Moropoulou, and reverend and contrite participation of many pilgrims from Greece, Russia, Romania and Ukraine.

After the Holy Eucharist and the Dismissal, there was a thrice procession of St. Basil’s hand relic around the Holy Sepulchre and the Shrines.

The procession was followed by the ceremony of the New Year Cake of the Church of the Resurrection led by H.H.B., at the Office of Geronda Sacristan Most Reverend Archbishop Isidoros of Hierapolis.

After the ceremony, bells tolling, the ascent to the Hagiotaphite Brotherhood Quarters took place. In the morning after the D. Liturgy at the Holy Church of Saints Constantine and Helen, His Beatitude cut the New Year Cake of the Hagiotaphite Fathers at the Epitropikon.

At noon, a festal meal was offered, at which invited guests were the Consul-General of Greece in Jerusalem, the dentist Mr. John Tleel, Mrs Moropoulou with the members of the Interdisciplinary Team of the N.T.U. of Athens, and all the Hagiotaphite Fathers.