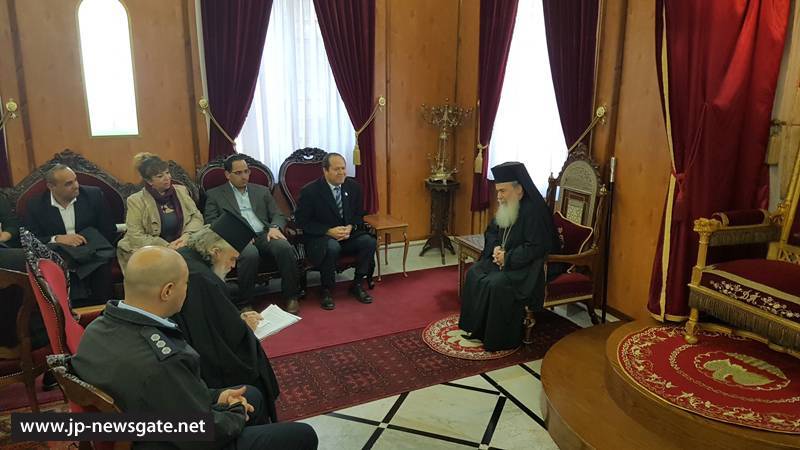 VISIT OF THE MAYOR OF JERUSALEM AT THE PATRIARCHATE

On Wednesday morning, 29th December 2016/11th January 2017, the Mayor of Jerusalem, Mr. Nir Barkat with a team of approximately twenty of his associates visited the Patriarchate on the occasion of the Feast of Christmas and the New Year.

The Mayor and his entourage were received by H.H.B our Father and Patriarch of Jerusalem Theophilos with Hagiotaphite Fathers, among whom were the Patriarchal Vicar Most Reverend Metropolitan Isychios of Kapitolias, Geronda Secretary-General Most Reverend Archbishop Aristarchos of Constantina and Dragouman Archimandrite Mattheos. At his visit, the Mayor of Jerusalem expressed his wishes for the Feast of Christmas to His Beatitude and assured him that the Mayoralty is doing the best in its power for the peaceful and seamless co-existence for all Jerusalem citizens and the Christians of the Holy Land.

The Mayor offered sweets to His Beatitude, while the latter offered Mr. Barkat a china vase with Jerusalem portraitures.