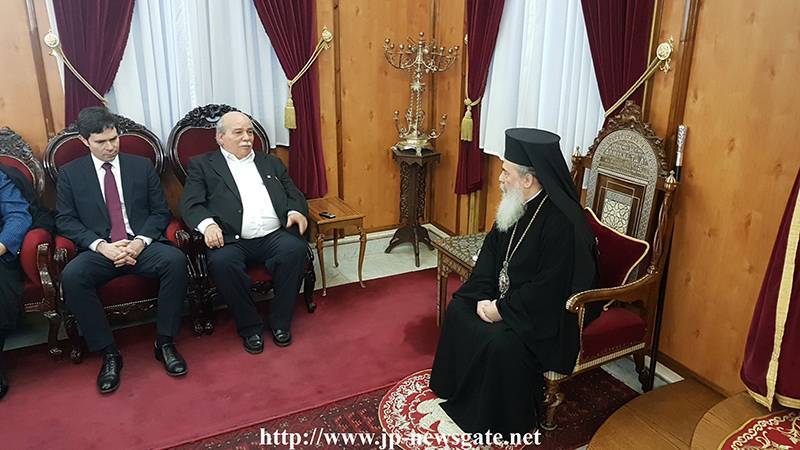 CHRISTMAS AT THE PATRIARCHATE (2017)

According to the very old tradition of the Church of Jerusalem, the feast of Christ’s incarnation has been celebrated in Bethlehem, the birthplace of our Lord Jesus Christ since the 4th century A.D.

Likewise, on Friday 24th December 206 / 6th January 2017, after the customary visit of the Police of Jerusalem at the Patriarchate, with the Orthodox scouts leading the way and under the sound of bells tolling, the Hagiotaphite Entourage, led by His Beatitude the Patriarch of Jerusalem, headed towards Jaffa Gate. There, the entourage members boarded the vehicles and preceding the police escort went to the Holy Monastery of Prophet Elijah which is located halfway between Jerusalem and Bethlehem.

There, the Mayors of the towns Bethlehem, Beit Sahour and Beit Jala together with their associates and the Israeli military Command of the area Kfar Etzion welcomed His Beatitude. The meeting was followed by venerating the Holy Church and a reception.

Afterwards, preceding the Israeli horsemen, the Patriarchal Entourage continued through the border of Rachel’s tomb. Passing through, preceding Palestinian motorcyclists, they continued in slow speed driving due to the Scouts’ marching ahead, as well as the crowd of Bethlehem citizens  – regardless of their religion – on either side of the road asking His Beatitude’s blessing, until they reached Bethlehem square.

There, His Beatitude was received by the Patriarchal Vicar Most Reverend Archbishop Theophylactos of Jordan, Hagiotaphite Hieromonks dressed in their liturgical vestments and married Presbyters of the Patriarchate from the neighbouring to Bethlehem towns, the Mayor and the Prefect of Bethlehem, Police Authorities and Scouts, the Consul General of Greece in Jerusalem Mr. Christos Sofianopoulos and the rest of the Consulate staff, the Professor of the National Technical University of Athens Mrs. Antonia Moropoulou and a great multitude of people.

Upon entering, with the Greek Consul General standing on the right hand side and the Mayor of Bethlehem on the left, the Entourage headed towards the Iconostasis and turning  right towards St Nikolaos Chapel, went down to the Nativity Cave.

Inside the Basilica, with the Greek chanting by the leading choir singer of the Most Holy Church of the Resurrection Archimandrite Aristovoulos and Mr. Alvanos, and the Arabic chanting choir, the descend to the Grotto of the Nativity took place, followed by the ascent through the north gate to the Armenian chapel, and finally stopping in front of the Holy Iconostasion.

Therein,  the Christmas Royal Hours were read followed by their incense procedures, led by His Beatitude our Father and Patriarch of Jerusalem Theophilos, concluding with Vespers and St Basil’s Divine Liturgy according to the Church order at 3:30pm.

At the end of the Service the Patriarchal Entourage went to the Hegoumenion through the Baptismal gate, where a fasting meal was offered.

Your Excellency Mr. President of the State of Palestine Mr Mahmoud Abbas,

“Glory to God in the Highest and on earth peace, good will among men”(Lk 2:14), is the great and everlasting message of the Feast of Christmas in general and of the city of Bethlehem in particular. This message is nothing but the voice of Divine Justice which corresponds to the great expectations of the aggrieved and weak people.

It is not possible for peace to exist without justice. The Prophet Isaiah features peace as a work of justice “the works of righteousness shall be peace” (Isaiah 32:17).

In you Mr. President is internationally identified the one “who hungers and thirsts after righteousness” (Mt 2:6), the political leader of the people of Palestine. This truth has been strongly supported with the recent decision of the United Nations Security Council which denounces the policy of the settlers in the occupied territories of Palestine.

We know Mr. President that this was a personal success of your efforts and those of your collaborators. Allow us to congratulate you. According to the principles of the Abrahamic religion and therefore of the Gospel of the birth in the Bethlehem Cave from Virgin Mary through the Holy Spirit of God the Logos, of Christ, the sacred gift of peace is the fruit of truth, justice and love.

This very incident is what we celebrate today. This incident is exalted by Christians and Muslims who make up and compose the Palestinian people and its Government under the wise leadership of your Excellency Mr. President.

The Holy Shrines which are historic meeting places of Heaven and earth, of Divinity with humanity, are those which guarantee the harmonious co-existence of the faithful people of Judaism, Christianity, and Islam.

They are the ones which throughout the centuries formed the unique culture of the multicultural, multinational and interreligious identity of the Middle East and especially of the Holy Land. Any effort of distortion of this informally existing Status Quo will be considered as lack of respect towards the God of love and peace (2 Cor. 13:11).

Mr. President, your presence with us constitutes an irrefutable witness of the good fruit of the historic and sacred Treaty of the Great Caliph Omar Ibn-al Khattab and our predecessor Patriarch Sophronios. This sacred Treaty is not a historic past, but a living present and a bright beacon amidst the ordeals, agitations, and confusions in the open sea of the people’s lives, especially in our region. As for Bethlehem, the Nativity Cave of the Prince of Peace and the Sun of Righteousness, they are the soluble harbour, where with governmental skill, prudence and wisdom you have already led the independence of the State of the Palestinian people.

We wish you many happy returns and a Peaceful New Year.

At 10:30pm on Friday 24th December 2016 / 6th January 2017, the feast of Christmas began with the Matins Service. For this, there was a formal entrance of the Orthodox congregation in the Basilica through the south gate of the Baptismal site, led by the Patriarchal Vicar Most Reverend Metropolitan Isychios of Kapitolias, who upon entering recited the introductory psalm, while the Greek choir under the leading choir singer Archimandrite Aristovoulos sang on the right and the Arabic choir of the Basilica of the Nativity under Mr. Samour Lawrence sang on the left the Matins troparia.

Having completed the above, around midnight His Beatitude exited the Holy Altar gate and went down to the Grotto of the Nativity under the chanting of the troparion “Come oh faithful! Let us go to see where Christ is born”, accompanied on his right hand side by the President of the State of Palestine his Excellency Mahmoud Abbas Abu Mazen, and on his left hand side the Greek Consul General Mr. Christos Sophianopoulos, followed by the Archbishops and the Priests who were dressed in their liturgical vestments, the Governmental and Consulate representatives as well as a crowd of Orthodox people participating in the prayer.

Herein after the chanting of the Degrees, the Gospel reading on Christ’s incarnate birth according to St. Luke was recited in Greek and in Arabic, “…in those days there went out a decree from Caesar August”. After the Gospel reading, His Beatitude our Father and Patriarch of Jerusalem Theophilos’ Christmas message was read in Greek by Geronda Chief Secretary and in Arabic by Dean Presbyter and Press officer of the Patriarchate in the Arabic mass media, Issa Mousleh.

For the English translation of the Christmas message follow the link:

His Beatitude especially underlined the following on the occasion of the presence of His Excellency the President of the State of Palestine:

“To the President of the State of Palestine His Excellency Mr. Mahmoud Abbas Abu Mazen we wish health, strength, solidarity and success in all his actions for the benefit of the Palestinian people. We also thank him for the honour of his presence in our Feast and for all his provisions and concern for our Patriarchate and all the Christians of the Holy Land”.

Consequently there was the veneration of the Star in the Manger, the assent through the north gate of the Cave, followed by a thrice litany, one for each of the Basilica aisles, under the choir chanting, which concluded in the middle of the Basilica for a Deisis (prayer).

Matins succeeded, with His Beatitude chanting the 9th Ode, the Praises, the Doxology and the Divine Liturgy officiating His Beatitude and co-officiating Hagiotaphite Archbishops, the Patriarchal Vicar Most Reverent Metropolitan Isychios of Kapitolias, the Most Reverent Archbishops:  Gerondas Aristarchos of Constantina and Chief Secretary, Theodosios of Sebastia, Demetrios of Lydda and Secretary of the Holy Synod, the Most Reverend Metropolitan Joachim of Helenoupolis, Hagiotaphite Priests and other Arab speaking Presbyters, among a multitude of faithful people who were  praising and glorifying God. The Divine Liturgy in the Grotto of the Nativity was led by the Most Reverend Archbishop Nectarios of Anthidona.