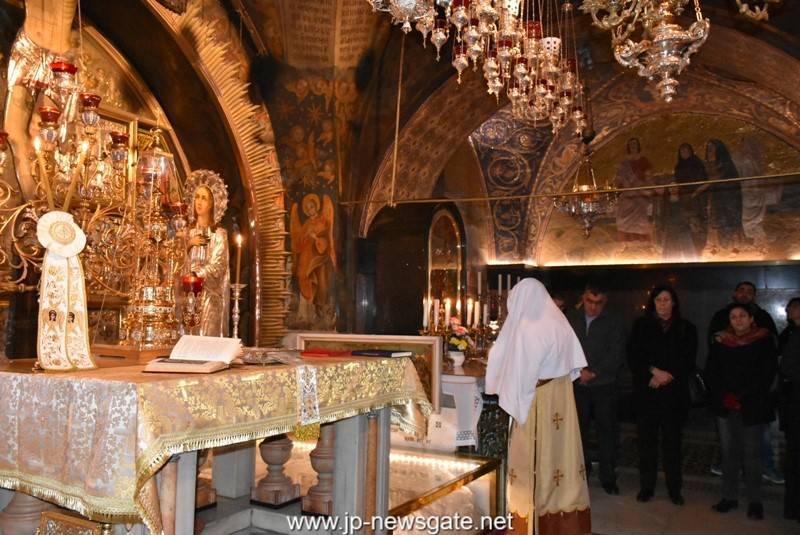 At noon of Friday, the 10th/23rd of December 2016, H.B. Theophilos, Patriarch of Jerusalem, blessed the vestment of Rabia Farah from the town of Kafr Yasif, Northern Israel, and advised him on the sacrament of priesthood which he has been called to serve.

On the morning of the following day, Saturday, the 11th/24th of December 2016, Mr Rabia was ordained to deacon at Golgotha by the Most Reverend Joachim, Metropolitan of Helenoupolis, and took the name of Nektarios. Both the ordained and the ordaining priest made addresses before the ordainment.

The ordained deacon was honoured by the presence of Metropolitan Isychios of Kapitolias, Archbishop Aristarchos of Constantina, Archbishop Isidoros of Hierapolis, Archimandrite Philotheos, Commissioner in Accra, Arabic-speaking priests, i.e. father Theodosios Mahouli, vicar in Kafr Yasif, f. Gregory of Tarseeha Community, f. Samuel of Sfaamer Community, f. Nasser, vicar at Beane Community; priests from Beit-Jala, i.e. f. George Sahouan, f. Bulos Alame; relatives of the ordained deacon; f. Nikolaos, vicar at Abu Snan, with his family, and a group of fifty people from Kufr Yasif as well as residents of the city of Pkea where the ordained will serve as priest.

After the divine Liturgy, the ordained deacon and his attendants walked to the Patriarchate where they received the Patriarch’s wishes and congratulations.