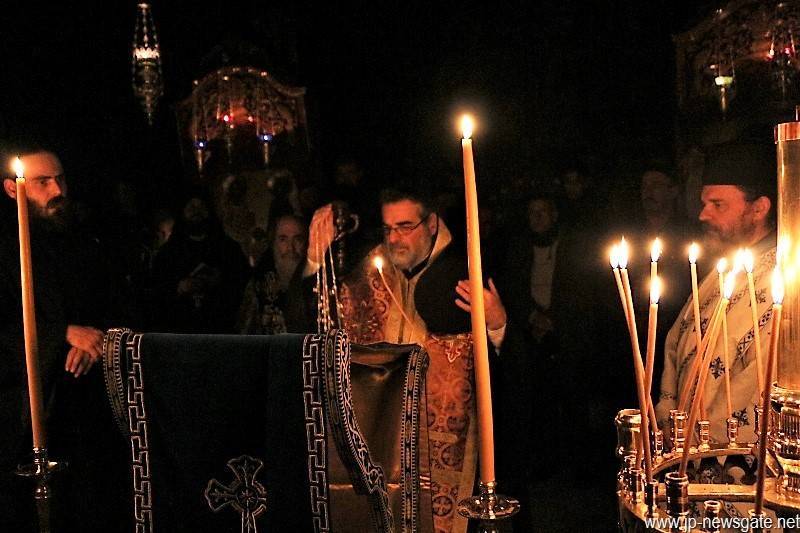 THE FEAST OF ST SAVVA THE SANCTIFIED AT THE PATRIARCHATE

A. At St Savva Lavra

On Sunday, the 5th/18th of December 2016, the Patriarchate observed the memory of Hosios Savva the Sanctified at the Lavra founded by himself.

The Lavra was founded circa 480 AD, after Hosios Savva had, for twenty years, led a monastic life near Hosios Theoctistus and Hosios Euthemius. At the Lavra, Hosios Savva received monks trained in ascetic life. The site of the Lavra was the right bank of Cedars Stream, opposite his cave. The first Church was built within a cavernous rock, dedicated to St Nicholas and titled “God-Built”.

After several years had passed, St Savva erected a beautiful katholikon in the middle of the Monastery, where he would guide crowds of monks. Eleven lavras sprang there, with the help of Emperor Justinian.

The memory of St Savva the Sanctified was celebrated at the katholikon of his Lavra by means of an all-night vigil on the night of Saturday, led by H.B. Theophilos, who had as concelebrants Archbishop Theophanes of Gerassa, Archbishop Aristarchos of Constantina, Metropolitan Joachim of Helenoupolis, Hagiotaphite Hieromonks and priests visiting from other Orthodox countries, Hierodeacons Markos and Demetrios. Archimandrite Aristovoulos sang with cantors of the Stavropegic Monastery of the Dormition of Theotokos of the Ecumenical Patriarchate in the presence of the Greek Consul, Mr C. Sofianopoulos, pilgrims and Rum Orthodox Arabic-speaking faithful from Bethlehem, Beit Sahour and Beit Jala. The vigil lasted until 6:00 am of Sunday, whilst several among the faithful participated in the sacrament of the holy Communion.

The Patriarch’s sermon may be reached here:

After the divine Liturgy, Archbishop Theophanes of Gerassa blessed lunch, whilst the Patriarch left for Jordan to participate in a meeting of the Leaders of Christian Churches in the Holy Land, upon the invitation of King Abdullah II.

The memory of St Savva was also observed at the chapel dedicated to him within the Monastery of the Archangels, with Vespers and divine Liturgy, led by Archimandrite Mathew. In attendance were members of the Monastery’s Greek Parish. After the divine Liturgy, Archbishop Demetrios of Lydda hosted guests to a reception at the hegumeneion.