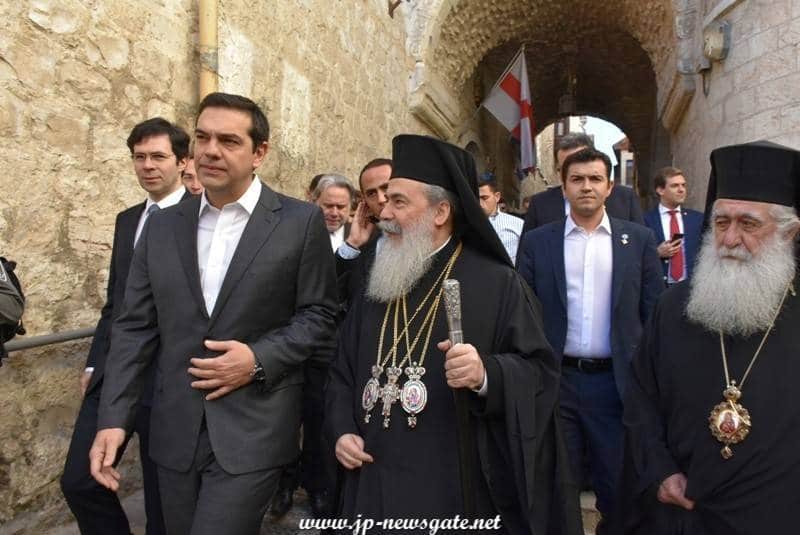 On the morning of Thursday, the 25th of November/8th of December 2016, the Prime Minister of Greece, Mr Alexis Tsipras, whilst on a visit to Israel, demonstrated in practical terms his interest in the ongoing restoration works on the Aedicula of the Holy Sepulchre, carried out by the Interdisciplinary Team of the National Technical University of Athens. The Prime Minister arrived at David’s Gate, where he was welcomed by the Secretary of the Holy Synod, His Eminence Demetrios, Archbishop of Lydda, and Archimandrite Mathew, with other Hagiotaphite Fathers.

From David’s Gate, the Prime Minster walked the Via Dolorosa to arrive at the Patriarchate’s Gate, where he was warmly welcomed by Patriarch Theophilos of Jerusalem. From there, amidst bells tolling, they proceeded to the Church of the Resurrection.

Accompanied by the Patriarch, Mr Tsipras was informed by Professor A. Moropoulou, project coordinator, on the works carried out on the walls of the Holy Aedicula, before visiting the old rotunda and the gallery of the Catholics to the south and west of the katholikon – where structural elements of the Aedicula are kept for conservation before being reincorporated into the wall.

Upon completing this tour, the Prime Minister visited the Elder Sacristan, Archbishop Isidoros of Hierapolis, where he expressed satisfaction over the progress of the project, expected to be completed before the Catholic Easter in 2017, saying that “this is a meeting place for Christianity, Orthodoxy, Hellenism and Culture”.