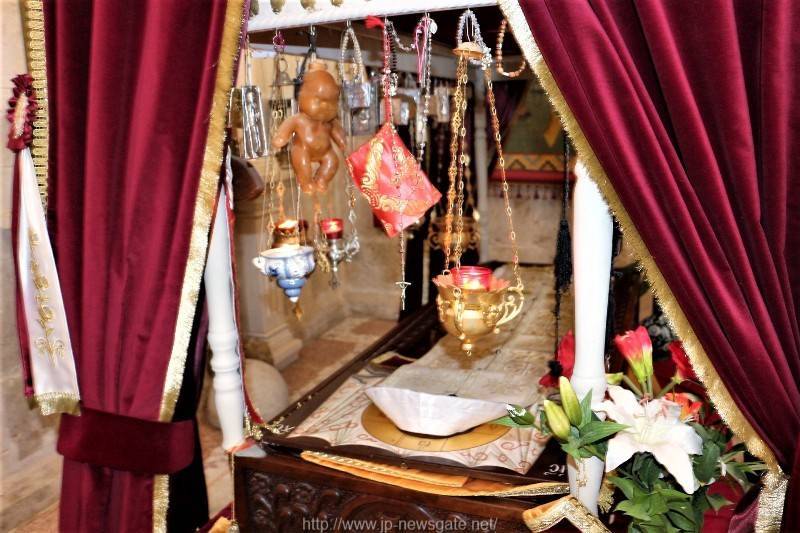 On Tuesday, the 16th/29th of November 2016, the Patriarchate observed the memory of St Philoumen the Hagiotaphite and Hieromartyr at Jacob’s Well, the site of his martyrdom.

Hailing from Orounta, Cyprus, St Philoumen, Hagiotaphite since a young age, was serving as hegumen at Jacob’s Well when, in 1979, he was attacked by a fanatic Jew and suffered death at the chapel near the Well.

He was canonized by the Church of Jerusalem in 2009, on the site where the Lord had revealed Himself to the Samaritan woman. His relic is kept at the chapel dedicated to his name, to the south of St Photini Church, built by the hegumen, Hieromonk Ioustinos. To the north side of the church, a chapel has been attached, dedicated to St Ioustinos, philosopher and martyr from Nablus.

The divine Liturgy was led by Patriarch Theophilos of Jerusalem, having as concelebrants Archbishop Aristarchos of Constantina, Metropolitan Joachim of Zambia and Hagiotaphite Hieromonks such as Archimandrites Ignatios and Mathew, and Hierodeacons Markos and Demetrios. Archimandrite Aristovoulos sang on the right in Greek, Arabic, Russian and Romanian, whilst the Choir of the Community of Raffidia sang in Arabic. The service was attended by a pious congregation from Greece, Russia, Romania, Ukraine and Cyprus.

During His sermon, Patriarch Theophilos said Hieromartyr Philoumenos had, since childhood, listened to the biddings of St Paul, saying: Therefore, I urge you, brothers and sisters, in view of God’s mercy, to offer your bodies as a living sacrifice, holy and pleasing to God—this is your true and proper worship.  Do not conform to the pattern of this world, but be transformed by the renewing of your mind. Then you will be able to test and approve what God’s will is—his good, pleasing and perfect will (Romans 12, 1-2).

“If we wish to receive the light of the Gospel’s glory”, the Patriarch said, “we must conform to Christ in His death, participate in His persecutions and sufferings, so that we somehow attain to the resurrection from the dead” (Philippians 3, 11).

“In other words”, His Beatitude said, “without temptation, trials and adversities, it is impossible for us to become worthy of the salvation of our souls” and went on to add that the memory of the holy martyrs calls us to realize that a Christian’s way of life is not of this world but must be inspired from the words of our God and Saviour, Christ.

On the conclusion of the divine Liturgy, the hegumen hosted guests to a reception followed by monastic lunch.