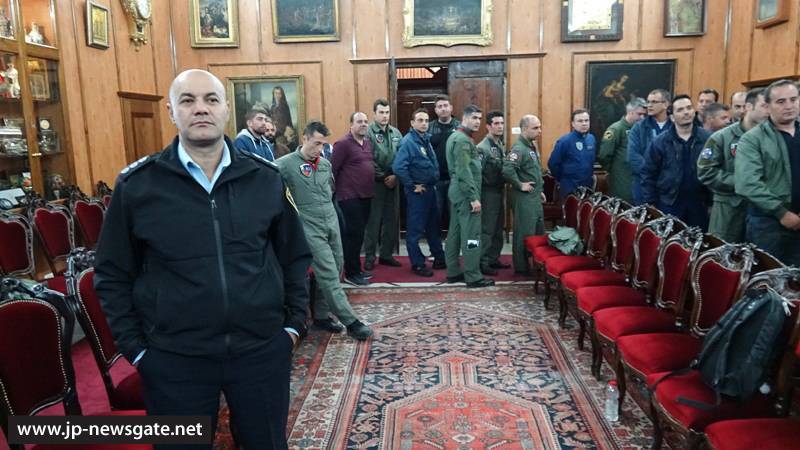 WHILST IN ISRAEL, HELLENIC AIR FORCE VISITS THE PATRIARCHATE

On the afternoon of Sunday, the 14th/27th of November 2017, a forty-member group of the Hellenic Air Force, particularly of the 383 Special Operations and Air Fire Fighting Squadron, accompanied by the representative of the Greek Embassy to Israel, Mr Broumas, visited the Patriarchate. Over recent days, the group had provided active and effective support to the extinguishment of the extensive wildfire that broke out in the city of Haifa.

The group was warmly welcomed by H.B. Theophilos, Patriarch of Jerusalem, in the presence of Hagiotaphite Fathers, including the Assistant Sacristan of the Holy Sepulchre, Archimandrite Polycarpos, who had served in the Hellenic Air Force before joining the Hagiotaphite Brotherhood. Patriarch Theophilos praised officers for their decision to participate, at the risk of their own lives, in the extinguishment of the wildfires that had destroyed a large area of natural environment and the residences of approximately 70.000 people, now homeless.

This act, His Beatitude said, demonstrates the conviction on our shared human nature and love for our fellow human beings, independent of race, colour and religion, whilst contributing to the consolidation of the relations between Greece and Israel.

Extending thanks for the blessing of having visited the Holy Sepulchre and received its moral enhancement, the Hellenic Air Force group offered His Beatitude a medal with its emblem. Patriarch Theophilos offered an icon of Panaghia Jerusalemite and of the Aedicula of the Holy Sepulchre.