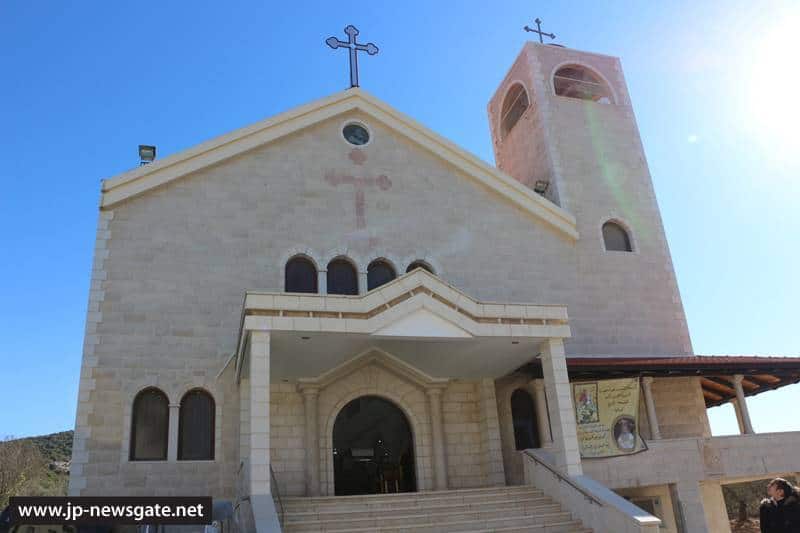 On Saturday, the 13th/26th of November 2016, H.B. Theophilos, Patriarch of Jerusalem, performed the consecration ceremony for St George the Great Martyr Church of the Rum Orthodox Arabic-speaking Community in the town of Peki’in, Northern Israel, that falls under the Bishopric of Acre.

Built over recent years, the Church was decorated on the economic and moral subvention of the Patriarchate so as to serve the veneration needs of the aforementioned community, in light of the narrowness of the earlier Church.

His Beatitude led the divine Liturgy, having as concelebrants Archbishop Aristarchos of Constantina, Metropolitan Joachim of Zambia, Archimandrite Mathew, the Master-of-Ceremonies, f. Bartholomew, and Hierodeacon Markos, as well as the church priest, f. Athanasios, and Arabic-speaking priests from adjacent towns. Archimandrite Philotheos, Patriarchal Commissioner in Accra sang for the Orthodox congregation of the parish.

During His sermon, Patriarch Theophilos referred to the words of the Evangelist John: The Word became flesh and made his dwelling among us. We have seen his glory, the glory of the one and only Son, who came from the Father, full of grace and truth (John 1, 14) and “out of his fullness we have all received grace in place of grace already given (John 1, 16).

“In truth”, His Beatitude said, “the Church of Christ, disseminated across the entire world, offers the bloodless sacrifice, namely the symbols of the Holy Body and Blood of Christ in altars consecrated by Christ”. “Christ”, Patriarch Theophilos added, “entered the House of God, namely heavenly Church, through the curtain that is His own flesh and blood, according to St Paul: Therefore, brothers and sisters, we have confidence to enter the Most Holy Place by the blood of Jesus, by a new and living way opened for us through the curtain, that is, his body (Hebrews 10, 19).

In Arabic, the sermon can be reached here:

A great crowd participated in the Holy Communion, receiving the Patriarch’s blessing after the apolysis.

Patriarch Theophilos offered an icon of St George for the new Church.

On the conclusion of the divine Liturgy, the Community hosted His Beatitude to lunch, during which He spoke in Arabic, see link:

Patriarch Theophilos then offered Church Commissioner Soukri the amount of 25.000 shekel for the completion of the decoration of the Church.