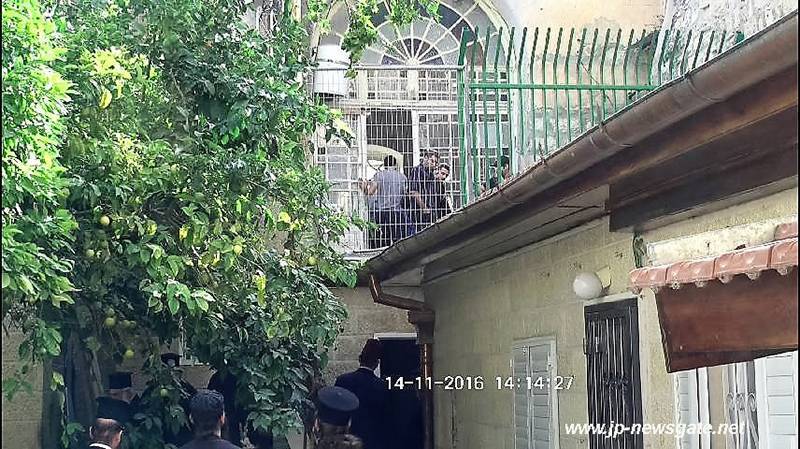 On Sunday, the 31st of October/13th of November and Monday the 1st/14th of November 2016, settlers-invaders of St John Hostel, members of the Ateret Cohanim organization, misinterpreting and distorting a temporary agreement signed between the Patriarchate’s legal consultants and their own legal consultants, entered a room that does not belong to the hostel they have been occupying, but to the building complex of Gethsemane Dependency, and set to work there by force and arbitrarily, whilst preventing the Patriarchate’s workman to work as agreed.

Patriarch Theophilos of Jerusalem went to the site on Monday, accompanied by Metropolitan Isychios of Kapitolias, Archbishop Aristarchos of Constantina, Archbishop Isidoros of Hierapolis, the Greek Consul to Jerusalem, Mr Christos Sofianopoulos, Dragoman Archimandrite Mathew, and other Hagiotaphite Fathers. There, they strongly protested against the Hostel’s settlers, whilst also calling the Israeli Police.

The Police, represented by the Chief Inspector Liaision Officer for Christian Communities and Affairs Mr. Johnny Kassabri, and Mr. Doron Turgeman rightly placed itself on the side of the signed agreement. Faced with the settlers’ denial to stop working, the Police ordered suspension of the works until the agreement be made clear.

When, on Monday evening, the Legal Consultants of the two sides failed to reach an agreement, His Beatitude asked for the Police’s vigilance in terms of complying with the suspension order, whilst instructing the Patriarchate’s consultants to seek justice in the courts towards preventing the settlers’ aim to change the pilgrimage status that includes the Dependency of Gethsemane before finally moving to the Court of the Church of the Resurrection.