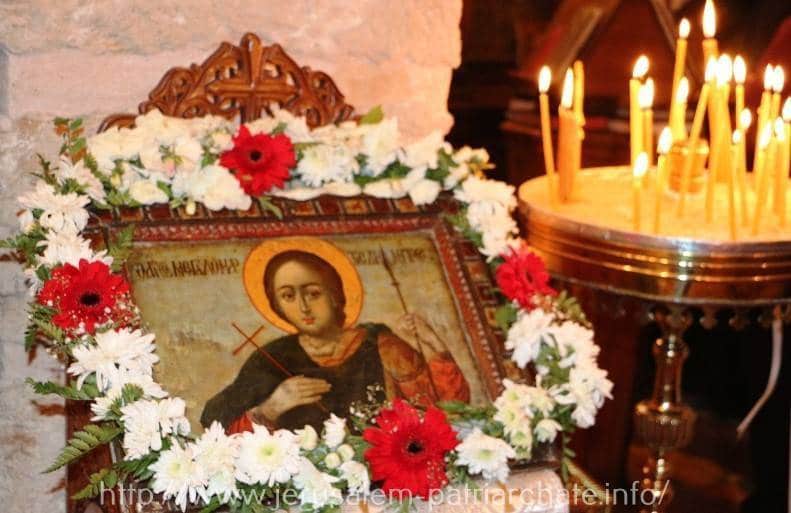 THE FEAST OF ST DEMETRIUS THE GREAT MARTYR AT THE PATRIARCHATE

On Tuesday, the 26th of October/8th of November 2016, the Patriarchate celebrated the memory of the glorious great martyr, St Demetrius of Thessaloniki, the Myrrh-Streamer, at the chapel dedicated to his name, that stands between the Hagiotaphite Brotherhood and St Demetrius School which, for more than half a century, had housed the Patriarchal Hieratical School that educated most Hagiotaphites, and now houses an Arabic-speaking School from Pre-school to the Lyceum.

In commemoration of St Demetrius who had glorified Christ through his martyrdom, Vespers and the Divine Liturgy were led by the Secretary of the Holy and Great Synod, Archbishop Demetrios of Lydda, who had as concelebrants Archimandrites Sergios and Mathew, f. Charalambos-Farah Bantour, and Hierodeacons Demetrios and Agapios. Patriarchal School students sang, whilst students from the Arabic-speaking Patriarchal School attended the service, alongside monks, nuns and pious pilgrims.

After the Divine Liturgy, the Hagiotaphite Brotherhood attended a modest celebratory event hosted by the students in honour of St Demetrius the Myrrh-Streamer.