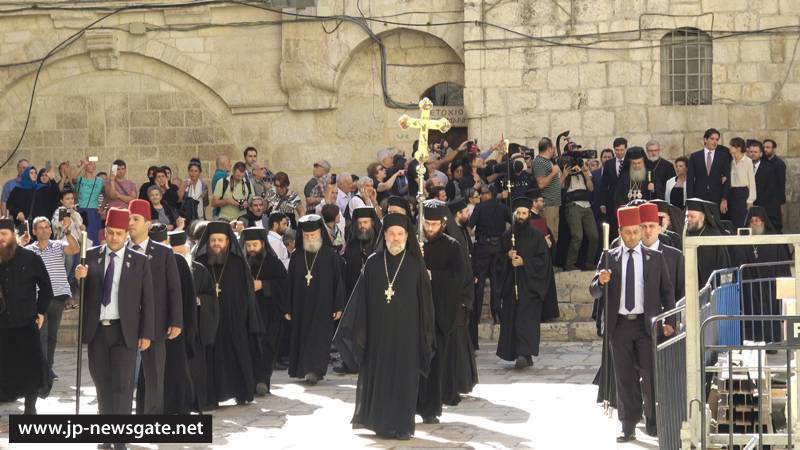 DOXOLOGY FOR THE 28TH OF OCTOBER AT THE PATRIARCHATE

On the morning of Friday, the 15th/28th of October 2016, Doxology was held at the katholikon of the All-holy Church of the Resurrection, on the national day celebrated in commemoration of the 28th of October 1940.

Doxology was performed as gratitude to God for His help to our nation for liberation from the 1940-1944 German occupation, and as supplication for the atonement and repose of all departed fathers.

The service was led by His Beatitude Theophilos, Patriarch of Jerusalem, having as concelebrants Prelate and Hieromonks of the Hagiotaphite Brotherhood, in the presence of the Greek Consul-General to Jerusalem, Mr Christos Sofianopoulos, praying members of the Greek parish and local Jerusalemites.

After Doxology, participants were hosted at the Patriarchate, where His Beatitude Theophilos addressed guests in Greek.

“The struggle against the forces of Fascism and Nazism”, Patriarch Theophilos added, “the face of which has already appeared in different form and shape in our days and within the limits of our own region, namely the Middle East, has admittedly been a miracle of patriotism yielded from the magnificence of the Greek soul and its Christian faith”.

The significance of the anniversary of “No” to the Axis forces must not be ignored, the Patriarch pointed out, “neither should it be construed as a conventional fact of our historical memory, but rather as a call for alertness in the face of merciless persecutions committed before our very eyes, displacement and murderous crimes against our innocent fellow humans, especially children”.

The Patriarch’s address was followed by a speech by Greece’s Consul-General.

“No”, Mr Sofianopoulos said, represented the Greeks’ unanimous refusal to cede their freedom and national honour. “It was their refusal to repudiate their history and live insignificant and subdued. It was their reaction against the darkest political forces that had attempted to subjugate Europe and the world”.

“Hellenism”, the Consul-General added, “fought with strength, self-denial, patriotism and heroism for the integrity of their homeland and for liberation, demonstrating the Greek virtues, dedication to traditions and resilience, inviting the admiration of the international public opinion”.

Today’s anniversary, concluded Mr Sofianopoulos, urges us to “contemplate the significance of the symbolism of the 28th of October 1940 for Hellenism on this present day. The unbreakable unit and patriotism shown by people who fought for peace, freedom, dignity and social justice, reminds us that “our ability to bounce back and triumph was and still is endless. A great responsibility weights upon us, to understand this message, convey it to the younger generations and move on united as then, with decisiveness”, the Greek Consul-General concluded.