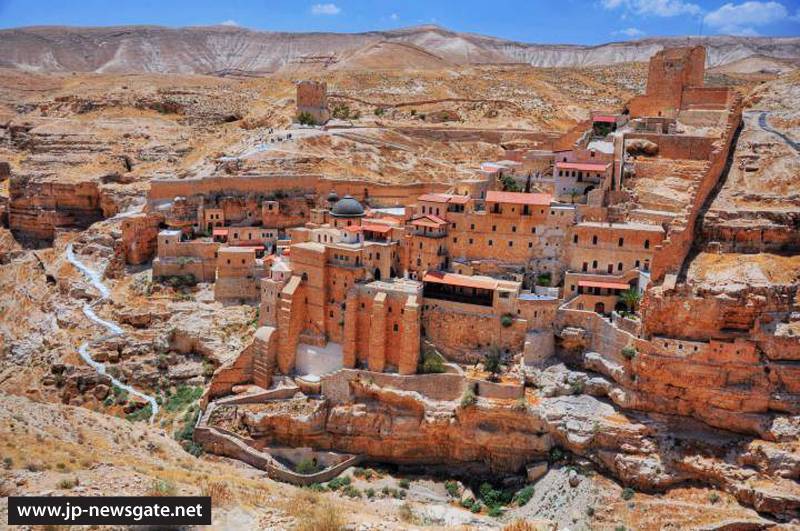 On Wednesday, the 13th/26th of October 2016, the Patriarchate celebrated the return of the relics of hosios Savva the Sanctified to his Monastery.

On this particular feast-day, the Mother of Churches celebrated the translation, in 1965, of the relic of hosios Savva from Venice to Jerusalem, and then to his Monastery, where it is kept to this day. The saint’s relic had been transferred by the Crusaders to Venice, and returned by the Roman Catholic Church upon request by the Church of Jerusalem after the meeting between the Pope and Ecumenical Patriarch Athenagoras in Jerusalem and the lifting of the anathemas.

The feast was initially led, during Vespers, by His Eminence Theophanes, Archbishop of Gerassa; then, during an all-night vigil, by H.B. Theophilos, Patriarch of Jerusalem, having as concelebrants Archbishops Theophanes of Gerassa, Aristarchos of Constantina and Metropolitan Joachim of Zambia. Archimandrite Aristovoulos sang in Greek on the right and Archimandrite Philotheos sang on the left, in Arabic, with Sabbaite Fathers. In attendance were pilgrims from Greece, locals from Bethlehem, Beit-Jala and Beit-Sahour, praising the Lord for the presence of the hosios’ consecrated relic.

During Communion, His Beatitude delivered a sermon in Greek, saying that Hosios Savva had realized that his body is a temple of the Holy Spirit, according to the teachings of St Paul, who said: “Do you not know that your bodies are temples of the Holy Spirit, who is in you, whom you have received from God? You are not your own” (1 Corinthians 6, 19). “This divine light of the Holy Spirit”, His Beatitude added, “is provided by our blessed Father Savva through his lantern, namely this sacred relic, attesting the transfiguration and resurrection of Christ, our Saviour. And it is precisely this transfiguration and resurrection in Christ that incessant prayer aims at, prayer not only by monks but by all those wishing to save their souls”.

“The venerable members of our Hagiotaphite Fathers are workers of the Lord’s pedagogy, these monks trained here with their spiritual Fathers under the protection of the Most Blessed and Ever-Virgin Mary, and under the guidance of Father Savva the sanctified, whom we honour today”, added Patriarch Theophilos.