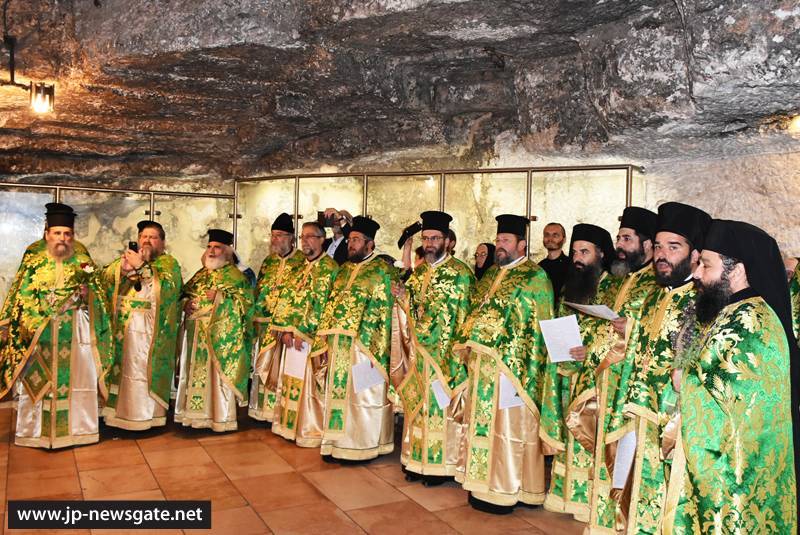 A. In the afternoon during Vespers

On Tuesday, the 14th/27th of September 2016, the Patriarchate celebrated the Elevation of the Holy Cross in commemoration of the fact that, on the completion of the opening of the Church of the Resurrection in 336 AD, St Helen and Archbishop Makarios of Jerusalem raised the Cross in this Church, on the site where it was discovered, within a cavity carved behind the rock of Calvary. Upon looking at the Cross, the crowd cried “Kyrie eleison”, Lord have mercy, which is sang to this day during the ceremony of the Elevation of the Cross to the four cardinal directions. The feast began on the afternoon of Monday by reading the Ninth Hour at the Monastic Church of Sts Constantine and Helen.

Immediately afterwards, the Patriarchal Entourage, led by Patriarch Theophilos, walked to the Church of the Resurrection.

There, at the Holy Apokathelosis, they were welcomed by the priests, holding the Gospel and an icon of the Holy Cross. The Patriarch censed and venerated, followed by the Prelates.

On the morning of Tuesday, the 14th/27th of September, the main feast took place.

At first, the Hagiotaphite Entourage walked to the Church of the Resurrection, where His Beatitude Theophilos, head of the celebration, venerated at the Holy Apokathelosis and the Holy Sepulchre before entering the katholikon.

The Patriarch led the divine Liturgy, having as concelebrants Metropolitan Isychios of Kapitolias, Archbishops Theophanes of Gerassa, Aristarchos of Constantina, Methodios of Tabor, Theodosios of Sebaste, Demetrios of Lydda, Makarios of Qatar and Joachim of Zambia, as well as visiting Prelates: Metropolitan Panteleimon of Xanthi, Justinos of New Krini and Kalamaria, Timotheos of Thessaliotida and Fanariofersalla, and Chrysostomos of Eleftheroupolis; also, Hagiotaphite Hieromonks, led by Archimandrite Nektarios, visiting Hieromonks from Greece and other Churches, Hierodeacons Markos, Anastasios and Demetrios. In attendance was the Greek Consul-General, the Ambassador of Romania to Israel, Ms Andrea Pastarnac, and the Romanian Minister of Education. Archimandrite Aristovoulos sang for a great crowd of pilgrims from Greece, Russia and Romania.

On the conclusion of the divine Liturgy, a procession began, followed by the Elevation Ceremony.

The procession moved to the Holy Aedicula and terminated at the cave of the Discovery of the Cross, where the Cross was elevated to the four cardinal points whilst the Patriarch made supplications and the Hieropsalts sang “Kyrie eleison”.

After walking thrice around the Holy Aedicula, the procession rose to the Golgotha, where the Patriarch elevated the Cross again and Prelates venerated.

On the conclusion of the feast, the Entourage returned to the Patriarchate, where His Beatitude addressed attendants in Greek.

The Church of Jerusalem, said the Patriarch, honours the elevation of the Cross on the site where it was discovered, namely the Church of the Resurrection, where the holy sacrament of the Eucharist was panegyrically performed. “The Cross of Christ”, said Patriarch Theophilos, “is the visible and tangible emblem of God’s infinite love and philanthropy. At the same time, the Holy Cross proclaims the victory of the light of Christ’s truth against the devil’s lying, of divine justice against the workers of injustice”.